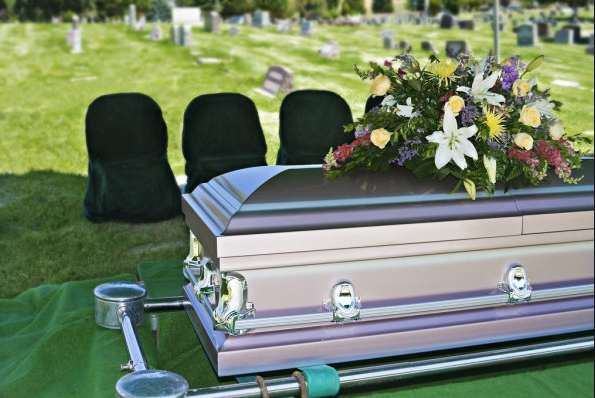 “I would like to start by saying we are not opposed to increases happening,” Thompson said at the Nov. 24 council meeting. “That is certainly a part of how the world works.

“However, these proposed increases are most certainly unreasonable.”

At the Nov. 10 council meeting finance director John Morrison told council the township needs to raise its fee for cremation lots in the cremation gardens by 300 per cent, from $375 to $1,500.

Similarly, non-cremation graves would go up 173%, from $825 to $2,250 in order to address the shortfall in the care and maintenance fund.

The intent was for council to revisit the recommendation at the Dec. 8 council meeting.

“If this increase goes through, people will shop around for plots,” Thompson said.

He pointed out current non-cremation rates for Mapleton-owned cemeteries are similar to those in Wellington North ($850), North Perth ($1,150) and Minto ($900).

He also asked, “Why should people today that are buying plots be taken advantage of at a time of need with this proposed increase?”

The Mapleton cemeteries in question are Drayton Cemetery and Hollen Cemetery.

“If you raise your prices too much then people will not buy in your cemetery, they will look elsewhere,” Thompson said.

“I don’t want people all of a sudden running to the smaller cemeteries that don’t have the infrastructure either to have an influx of interments.”

In a letter to the editor, Pam Ellis, of the Bethesda Community Cemetery Board of Trustees, said the cemetery, also located in Mapleton, charges $1,000 for a plot and does not want to raise that price if the township raises its costs.

“At Bethesda Cemetery, we have tried to keep our prices similar to the prices charged by Mapleton,” she said.

“This discourages Drayton residents from purchasing plots in our cemetery because of a cheaper price.

“We want people to choose Bethesda Cemetery because that is where they want to be and not because of the price.”

“We want to be burial grounds for our local community.”

Thompson put a lot of the blame on the township for mismanaging the cemetery plot costs.

“In 10 years, with mismanagement, Mapleton has not had [a significant] increase,” he said.

That would have put Mapleton cemeteries in line with others in the area.

“You can’t expect to make up a deficit because there was no increase in 10 years, with one increase,” he said.

“That would be like a car company not increasing the price of their cars for 10 years and then all of a sudden say ‘Hey, you know what, I’ve got to charge you another $10,000 for a car.’

Ellis said she has recently received many calls from Drayton residents inquiring about plot prices.

“One resident said that he could not afford to live in Mapleton Township because of the high property tax and now he cannot afford to die here,” she wrote.

“He was not joking.

“We need to work together to provide Mapleton residents with affordable burial options.”

Thompson also pointed out the people buried in Mapleton cemeteries are usually from the area and contributed taxes to the municipality throughout their lives, helping to pay for parks, arenas and other areas of the township.

“Ken’s comment about the dead contributing to Mapleton while they were alive and you know, kind of revolving around should the lands be subsidized by the public, was a take that I hadn’t actually thought about too much before, to be honest with you,” said councillor Michael Martin.

“So that’s something to think about.”

Martin asked if people outside of Mapleton could be buried in Mapleton cemeteries.

Thompson confirmed that they can, but it usually happens if their ancestors are from Mapleton.

In addition to concern about the price increase in cemetery plots, Thompson also spoke about space concerns at Drayton Cemetery.

He said the cemetery is the amalgamation of the Catholic cemetery and the Protestant cemetery.

“To be honest, Drayton Cemetery is teetering on the edge of a cliff with not enough room unless they start filling more plots from a former Catholic cemetery to the Protestants,” he said.

“In our community, it has always been seen as two.”

He asked the township to begin expanding the cemetery now, rather than later.

“This is a problem that has been passed to our current council … it’s one that has been building for years and unfortunately, with the lack of management in the cemetery for the past 20 years, has us here today,” Thompson said.

“We want to help with the cemetery going forward in a direction that will have it be in the right place for the next hundred years.”

Those options could include expansion or the installation of a columbarium for cremated remains.

Councillor Dennis Craven asked how long it would take to prepare additional land for burials.

“We have developed the capital forecast based on our 2018 Cemetery Master Plan and the lands that are developable or to expand the cemetery are planned in future years and that plan is in the capital,” said director of public works Sam Mattina.

“I believe it’s in 2037 … when we require the expansion of the actual physical land.

Councillor Marlene Ottens said she thought the columbariums should be built sooner rather than later.

“If space is an issue that’s an easy way to solve the problem because you can actually put whatever it is, 30 remains in the space of what you would normally put three or four,” she said.

“So that actually solves a lot of our space issues if we would get the columbarium up sooner if they’re buried in the ground and require a stone that takes up more space.”

“I just hope there’s enough room to get us through until it’s ready to go,” he said. “I just don’t want to run out of room now.”

Thompson agreed a columbarium would help with space issues, however, many older people are not choosing cremation and would still need a burial plot.

“Not all of them have bought plots and they are all getting to that age where they will need plots,” he said.

Mayor Gregg Davidson told Ottens that if she wants to discuss funding a columbarium she needs to make a motion to include it in the 2021 budget.

“There are bylaws I think that are maybe not satisfactory,” Baron said.

“The Master Plan doesn’t seem to meet the needs as demonstrated by Heritage Funeral Homes.

“So maybe what we can do as staff is kind of regroup, meet with Heritage Funeral Homes and anybody else that’s involved in this type of business, and come back with a recommendation to council, an overall recommendation that suits the needs of everybody so that we just don’t piecemeal things together, if council’s agreeable.”

Davidson thanked Thompson for his input.

“I know that you’re well respected in the community and we’re going to take what you have told us and take it to heart and listen to what you were saying and sort of follow up on this,” he said.