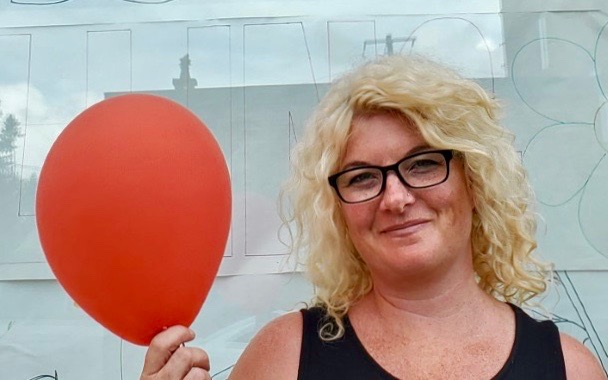 Erin Kiers standing in front of her salon, Hybrid Hair and Detox Spa in Mount Forest, with a red balloon. Submitted photo

She was joined by hairdressers all over the province who are protesting the lockdown of salons and lobbying the Ontario government to allow them to open on June 14.

Red balloons will be put up every Wednesday at salons all over the province until stylists are allowed to reopen. Those in the community are encouraged to participate by putting up their own red balloons.

The Red Ballon Day campaign was organized by the Allied Beauty Association and the Ontario Professional Hairstylist Association.

“We want these red balloons to jump out at people to have them recognize that we’ve been undervalued, under recognized, and under supported,” said Kiers.

She added that out of any trade, hairdressers are especially qualified to work during a pandemic.

“We actually have to acquire specific infection and viral control through sanitization and disinfection training in order to graduate hairdressing school, and in order to acquire our license,” she explained.

“It does not go unnoticed that all the other trades are male dominated and our trade happens to be female or female-identifying dominated,” she said.

Kiers stressed that stylists are not making light of the pandemic, noting they “take very seriously the current climate of COVID.”

Stylists feel that Ontario College of Trades (OCOT), has dropped the ball, not advocating on their behalf during pandemic restrictions.

“Doug Ford … stated that he was going to disband OCOT but that was supposed to happen April of 2020. So we feel we’ve fallen through the cracks,” said Kiers.

A big issue for Kiers is that it seems to be forgotten that stylists have specialized training and are uniquely able to operate in this environment.

“We’re looking for support and acknowledgement for the specialty training that we do have, and that we can keep our community safe and reopen for step one,” she said.

Trina Reid, owner of Cut and Design, a Fergus-based salon with five hairdressers, said that despite the past year of on-and-off closures, the employees are all still the primary income providers for their families.

“There’s over 35,000 stylists in Ontario, so that’s a big number of people that are left without income, that can very safely service people,” she said.

Reid added, “We’re not against lockdowns necessarily, we’re not anti-government in any way, we just want to be treated fairly and equally to the other trades.”

Cut and Design has been open off and on since March 2020 and despite closures, the salon is still paying hydro, rent, security, all without the usual income.

“The retail side of it is a small percentage; usually for a lot of salons it’s under 10% of your income, so even if you’re doing curbside there’s no way you could possibly pick up the slack to pay the bills that way,” said Reid.

She noted that hairstylists working together are a force.

“It doesn’t take much for one person to say… stop the madness, and that’s where… the idea for the red balloon came up, that means stop,” she said.

Reid mentioned how stylists are taking restrictions seriously, going above and beyond, and cutting their income in half when they are allowed to be open, as they can’t have as many clients in the salon at once.

Despite these obstacles, hair stylists want to get back to work.

“We know what we do for people’s mental health, we know because they’re telling us,” she said.

“And we actually want to work. We don’t want to sit home and collect any government funds, we want to put it back into the economy.”