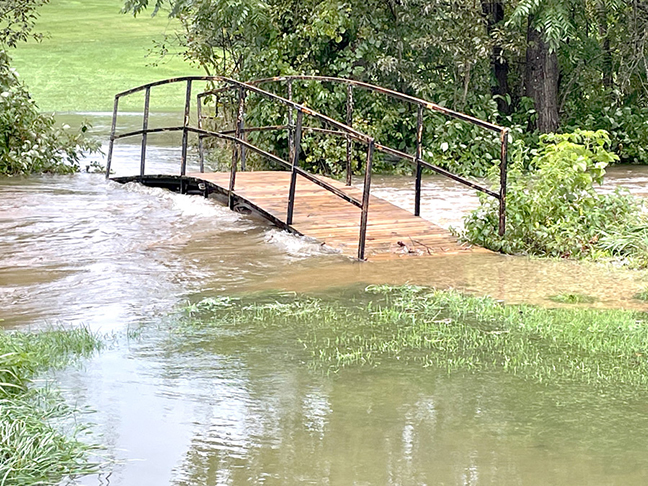 WELLINGTON COUNTY – A flood warning has been issued for the Conestogo River through Drayton in the wake of heavy rainfall yesterday and through last night.

Issued at 11:55pm on Sept. 22, a warning from the Grand River Conservation Authority (GRCA) states flows in the Conestogo River through Drayton were expected to peak in Flood Warning Zone 1 early Thursday morning. Municipal flood coordinators have been advised to notify affected residents and monitor conditions.

The GRCA reported at that point the Grand River watershed had received between 60 millimeters to 100mm of rainfall over the previous 24 hours.

“Flows in local waterways have begun to increase and are forecasted to remain elevated into the weekend, increasing the safety risk around rivers and streams throughout the watershed. Runoff from this event has caused flooding in urban areas including Schneider Creek through the City of Kitchener,” the authority states.

The GRCA is advising municipal flood coordinators in flood warning areas are advised to take all necessary actions to prepare for the forecasted flood conditions.

“Residents and businesses located in the floodplain should prepare for the risk of flooding and ensure they are aware of their local municipal flood response plans,” the authority advises.

The flood coordinator for Woolwich Township closed the low level bridge upstream of St. Jacobs at 1505 Three Bridges Road on Wednesday afternoon. The GRCA anticipates that this closure will remain in effect throughout the weekend until flows in the Conestogo River recede. 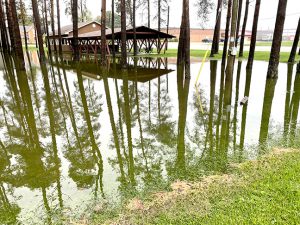 The GRCA’s major reservoirs at Belwood, Conestogo, Guelph, Luther, Woolwich, Laurel and Shade’s Mills are being used to store runoff and help reduce flooding downstream of these reservoirs. The GRCA is actively operating smaller dams at Wellesley and New Dundee to help manage the runoff from this rainfall event.

The public is encouraged to exercise caution around all local waterways. Banks adjacent to rivers and creeks are very slippery and, when combined with fast-moving water, pose a serious hazard. Parents are reminded to keep their children and pets away from all watercourses.

The warning remains remain in effect until noon on Sept.24.

The MVCA noted river levels were expected to reach or slightly exceed bankfull conditions, with flooding limited to traditional flood-prone areas. Significant flooding is not expected at this time. Peak levels were expected Thursday morning in the headwater regions (Listowel, Harriston, Lucknow), with larger watercourses peaking on the weekend.

Municipal staff were advised to monitor local problem areas and be prepared for the closures of low lying roads.

Residents are reminded to stay away from rivers, ditches, and streams. River banks will be saturated and slippery and flows will be very fast over the next several days.

This statement was to remain in effect until 10am on Sept. 27.