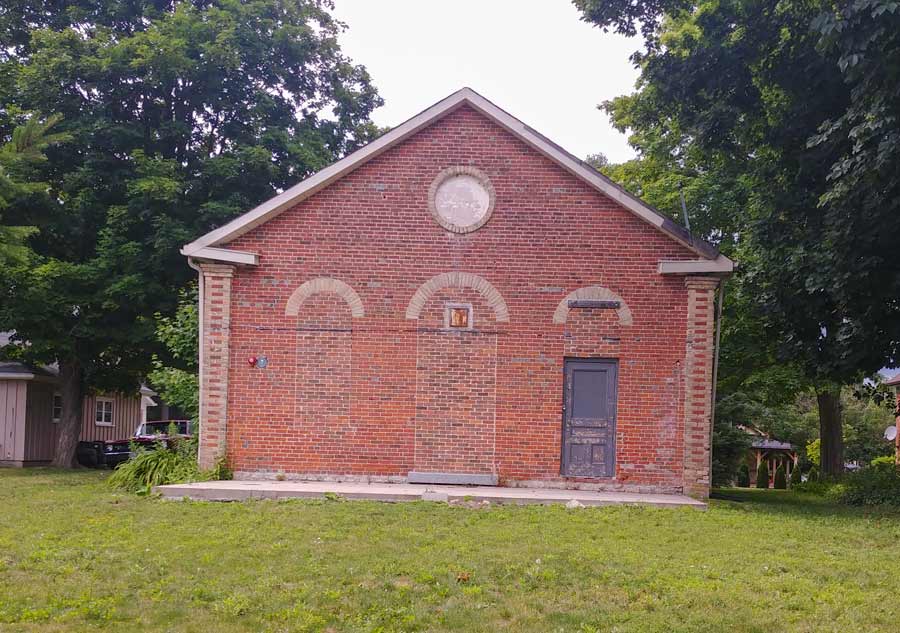 Heritage revitalization - The property at 33 Henderson Street in Elora has received rezoning approval from Centre Wellington. Council passed a resolution allowing commercial activities on the ground floor of the heritage building that was the first Baptist church in Elora at the July 29 council meeting. It also approved commercial and residential use for a second structure on the property.
Photo by Jaime Myslik

ELORA – The first Baptist church in Elora is on track for a facelift.

“I just want to say that this was one of the best reports I’ve ever seen,” councillor Stephen Kitras said. “It was so thorough and so well put together and from the planner’s point of view.”

The site currently houses the church and an old barn on an L-shaped lot just west of Geddes Street, behind the municipal office.

The church is designated under the Ontario Heritage Act. The plan is to restore it for commercial use, with potential for a residential addition on the Henderson side of the property.

The blue barn on the property has no heritage value and the current plan is to demolish it and build a structure with a smaller footprint so it doesn’t encroach on township lands and complies with Ontario Building Code requirements.

“The owners propose to restore the existing protected heritage building, which is in need of stabilization and repair and has been vacant for several years, and they would like to be able to provide small-scale limited commercial uses and use the buildings for commercial residential opportunities,” township senior planner Mariana Iglesias told council at the committee of the whole meeting on July 22.

To help pay for the restoration of the church, the owners are hoping to offer commercial uses on the ground floor of both the barn and the church.

“The intent … is to allow the owner the ability to lease space to local artisans or business owners who may produce and sell their products on site or who provide a neighbourhood scale service that does not generate a great deal of customer turnover or traffic,” the report states.

“The parking on the site is quite limited, however, there is ample municipal parking on adjacent streets and in municipal lots nearby.”

The township held a public meeting on May 29 and the updated application reflects the comments and concerns brought up at that meeting, Iglesias said.

“I’d just like to applaud the efforts of the owners of the 33 Henderson Street building and the team who addressed heritage and zoning concerns related to the project,” said councillor Ian MacRae.

“I think they’ve come a long way in trying to address community concerns and I think it’s important for us as a community to meet them part way in approving this to make a change.”

One of the comments at the public meeting was the possibility of having an address on both Henderson Street and Margaret Street (the property has frontage on both streets.)

Councillor Kirk McElwain asked if any decision was made as to the feasibility of two addresses.

Iglesias confirmed it would be possible.

“It’s going to be amazing,” he said.  “I really appreciate it. Appreciate staff. Appreciate the property owners working with our team and appreciate all the work that goes in for Heritage Centre Wellington to make sure that we’re providing that kind of service and support to individuals and families who want to see these properties brought to their former glory.”

The zoning bylaw amendment was approved by the committee of the whole on July 22 and by council on July 29.