Fergus Scottish Festival coordinator Elizabeth Bender and president Dave Radley are eager to get the word out that this year’s festival will be digital again, with all the spirit and fun of the live event. Photo by Joanne Shuttleworth

Yes, the in-person festival has been cancelled for the second consecutive year, but the virtual festival is still a go – version 2.021 organizers are calling it – from Aug. 13 to 16.

It’s disappointing to have to cancel the event again, festival board president David Radley and festival coordinator Elizabeth Bender said in an interview.

“It is truly heartbreaking,” Bender said. “We plan all year long for three days. But there has been an outpouring of supportive disappointment for us.

“And we’re hoping this year will be better than our first virtual event last year, which was pretty good.”

Radley said he was amazed that last year’s Wee Digital Celidh was so well received and well attended.

He said in a normal year about 22,000 people attend the in-person event and “we had roughly the same number of hits for the digital event. And I was very surprised at how professional it was. It was all done by volunteers.”

Based on that, Radley and Bender are excited about what’s in store this year.

All the events previously held in person will be held on screen, including pipers, dance performances, heavy events, and the clans and heritage village.

Last year the festival aired interviews with athletes and highland dancers, who also offered some instruction. There were also sessions on how to speak Gaelic and how to play the bagpipes.

“I was surprised at how well that was received. You don’t get on site,” Bender said.

The digital event will also offer a virtual tour of Scotland.

“It’s being done for us by a tour company in Scotland,” Radley said. 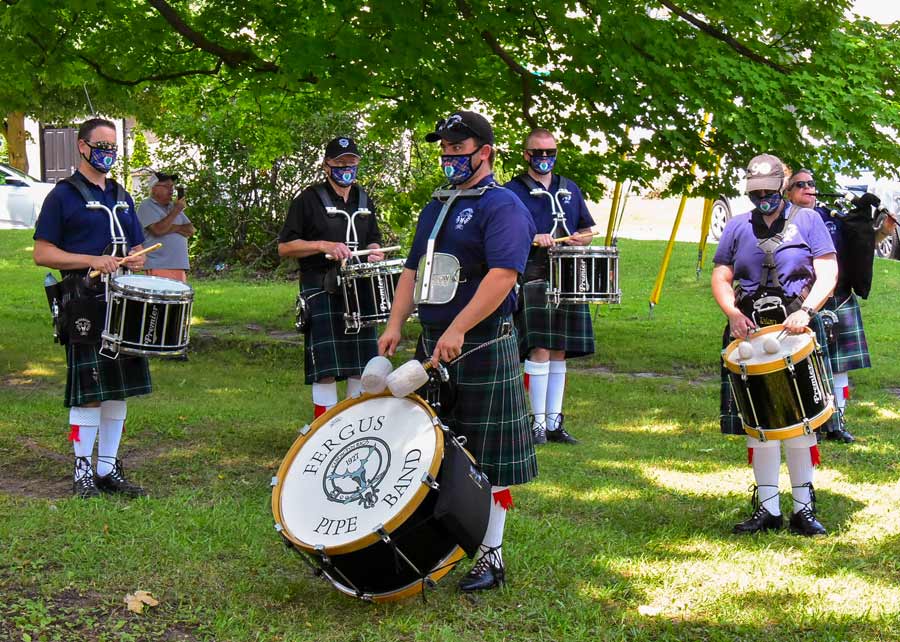 The Fergus Pipe Band presented a concert near the Kissing Stane at James Square as part of the 2020 Wee Digital Ceilidh. Advertiser file photo

As well, last year was the 75th anniversary of the festival, so in this 2.021 version there will also be a photo competition, where people can submit photos from the past 75 years.

Paint the Town Tartan,  a fun event for locals to decorate their homes or businesses with tartan and all things Scottish, will run again as well.

And there will be something called “Festival in a Box,” which Bender said is an opportunity to “bring the festival home” – but she was cagey about details.

“We have lots of irons in the fire,” she said, adding a full schedule of events and ways to participate will be released after Canada Day.

Organizers are also thinking about the 2022 event, which they hope can be live and in person, but will likely still require public health considerations such as more hand-washing stations, face masks and spreading out on the grounds behind the Centre Wellington Community Sportsplex.

Radley said the festival annually contributes about $3.5 million to the local economy.

“We have 200 volunteers, 22,000 patrons and competitors, 350 campsites – they are all affected,” he said. “And we use local people for the beer tent and food infrastructure. So, having to cancel does have an economic impact on the community.”

Holding a virtual festival is not the same, but it keeps interest and engagement, and could even build attendance in future years.

“Our focus is on our tagline – Scotland without the airfare. We’re going to do our best to keep the spirit of the festival alive,” Radley said.

Details about the 2.021 are available at fergusscottishfestival.com and on social media. People can also sign up for a newsletter on the website to receive up-to-date information by email.