Facade improvements - The Fergus Marketplace has received a community improvement plan grant for $10,000 and a loan for $10,000. The grant is to improve the facade on the Grand River side of the building.
Agenda package photos

ELORA – The Fergus Marketplace has received a community improvement plan (CIP) grant to improve the building façade adjacent to the Grand River.

Council approved the application at a committee of the whole meeting on July 22 and ratified the decision at the July 29 council meeting.

“We’ve beautified the other side of the river with the library and the river walk, so this is a welcome change to the building,” managing director of planning and development Brett Salmon said at committee of the whole.

The project involves the side of the building that leads to the Goofie Newfie Pub and Grill.

There will be a new sign that says “Fergus Marketplace” and the building will painted to mimic board and batten. 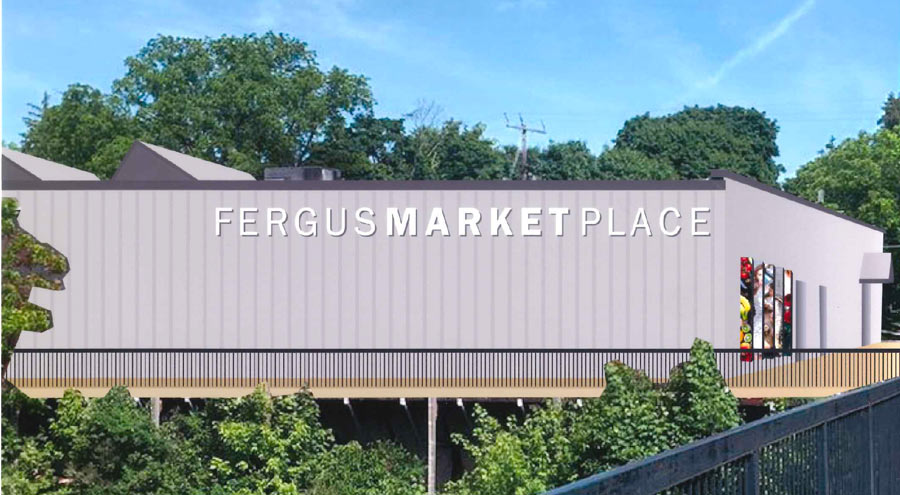 “We’re just painting the wall a better colour than it is right now and then putting strapping so that it would look like board and batten from across the river,” said Jackie Fraser, owner of Fraberts Fresh Food, speaking on behalf of the marketplace.

“But of course if you’re up close to see it, it’s still just the concrete blocks that we’re just going to paint and then put strapping on. It’s a really long wall so to actually put board and batten all the way would be hugely expensive.”

Councillor Stephen Kitras said he is worried about such a project on a heritage building.

Senior planner Mariana Iglesias said the wall in question is not part of the heritage designation on the building.

“It’s the back of the building, the concrete block wall that was added later, so it’s excluded from the designation.” She said the board and batten look would complement the stone on other parts of the building.

Kitras said he is still concerned the building will look more like a warehouse. He asked whether the façade improvement would bring more people downtown or attract people to cross the bridge to look at the stores in the marketplace.

“I don’t think it does actually,” he said. “I think it’s kind of a cleaner, single painted place and I’m just sort of wondering how we’re supposed to enhance Fergus.

“I’m sort of just wondering whether this was the only option or whether there was any other discussion about what to do with that?”

Mayor Kelly Linton and CAO Andy Goldie said the façade improvement is just one aspect of the overall marketplace construction.

“This is to look after the one marketplace which we’ve identified by establishing it as a priority site,” Linton said. “We’ve identified this as something that is worthy of some tender loving care, I guess.”

Goldie explained there have also been improvements to the Queen Street side and the parking lot side.

“This is fixing up the building,” he explained. “The long-term plan is actually connecting the river trail with a boardwalk along the entire back part of their marketplace.”

However, at this time the marketplace cannot afford to construct the entire boardwalk.

“I have lots of dreams about that building, what can be done and opening up more shops towards the back and having that boardwalk all the way along,” Fraser said.

“I think would be awesome, but I have to be a little more patient and we have to sort of work through step by step.”

Councillor Ian MacRae asked is it is possible to put historical photos along the wall to encourage people to cross the river and check them out.

Fraser said officials considered putting photos in the existing windows (which currently look like flags). However, the idea was abandoned for a cleaner, simpler look.

“There’s years of discussion on these kinds of things,” she said. “We talked about putting a mural there as well, which would be really cool, except it’s cool for about five years [when] you’ve got to repaint it.

“We really have been working on this for a long time and we did kind of go the simplistic route, but we did discuss a lot of those options.”

Council approved the CIP grant and loan for the Fergus Marketplace.

“This is exciting because we’ve done so much work on the back side of downtown Fergus and so to see the changes that this looks like, this is something that we hoped would have happened and it’s good to see it in front of us today,” Linton said.

“Looking forward to seeing those changes.”