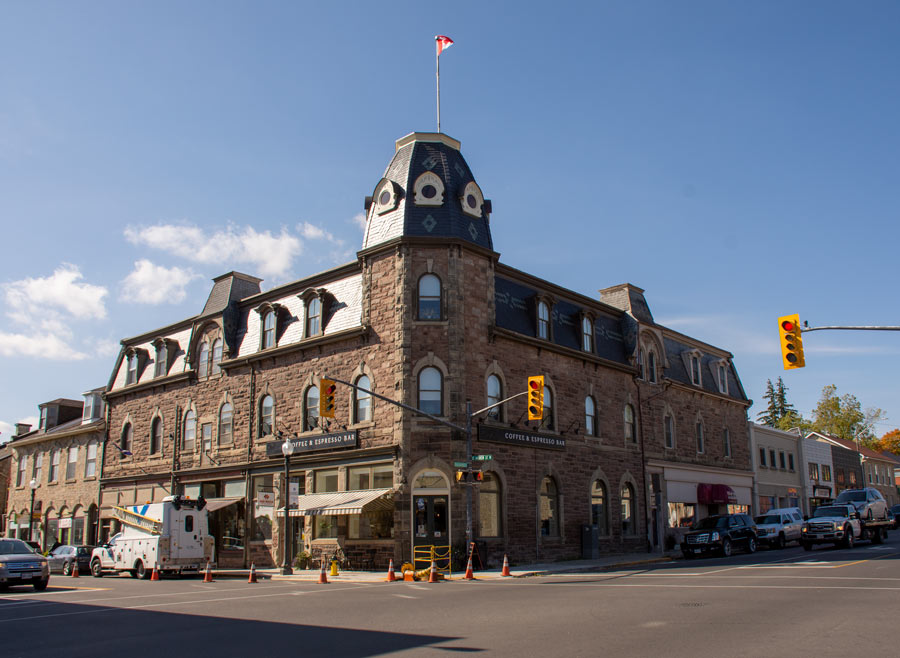 Corner building - Dale and Lori Clarke, owners of The Vault Coffee and Espresso Bar, won a national award for the restoration of a major section of the Marshall Block in downtown Fergus at the corner of St. Andrew and St. David streets. Photo by Jaime Myslik

The Clarkes restored a major section of The Marshall Block in downtown Fergus and received an award from Heritage Centre Wellington.

The ACO award recognizes and celebrates a commitment to the preservation and repurposing of the corner section of the iconic 1883 landmark Second-Empire-style commercial building that for 136 years has defined the busiest intersection in Fergus.

The project was financed and managed by Dale and Lori, with advice from architect Lloyd Grinham.

The building was built by John Black, a successful grain and cattle merchant.

In 1890 jeweller Samuel Marshall purchased the building and it became known as The Marshall Block.

Marshall’s own business was established in the St. Andrew Street section of the block. However, over the years, both the interior and exterior of the building had deteriorated.

The Marshall Block has had several owners and housed many tenants.

It is currently divided into three sections, with the Clarkes owning the central section on the north west corner of St. Andrew Street West and St. David Street (Highway 6).

In 2013, with financial support and foresight, the Clarkes saw an opportunity to restore the deteriorating corner section of the Marshall Block so that it continues to enhance the gateway to the downtown Fergus business district.

Started in 2014, the Clarke restoration and repurposing of this three-floor, historically and architecturally significant building is now complete and inspirational not only to the owners of the adjoining sections of the block, but to all owners of listed and designated buildings in small town Ontario, officials state.

Taking their inspiration from the old bank vault that remained in the building, the Clarke family established and manage The Vault, a coffee and espresso bar at street level. The refurbished second floor is now occupied by a real estate company, and the top floor provides residential accommodation.

The Clarkes began research at the Wellington County archives.

Gathered images are now displayed in the original bank vault, a feature in their new espresso bar.

Beginning in 2014 with replacement of slates and copper flashings, the building was repointed with historic mortars.

A missing corner door was designed and installed.

Weathered porthole dormers were replicated and crown molding was replaced on the dome.

Due to water damage and misguided renovation, there was much work done inside the building.