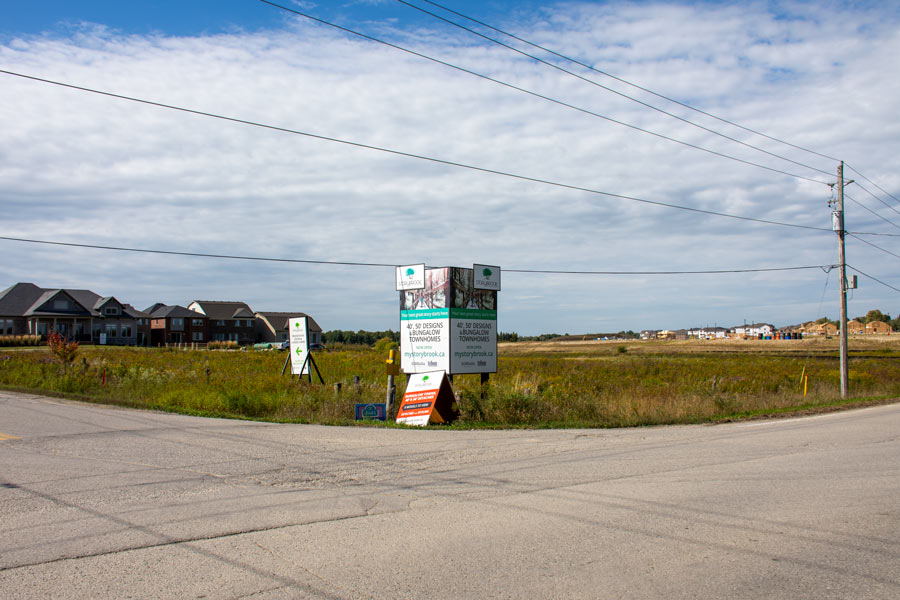 LPAT - Approval of phase three of the Storybrook development between Elora and Fergus, bordered by Colborne Street and Beatty Line, is in the hands of Local Planning Appeal Tribunal member Scott Tousaw. Photo by Jaime Myslik

ELORA – Approval of phase three of the Storybrook development between Colborne Street and Beatty Line is in the hands of Local Planning Appeal Tribunal (LPAT) member Scott Tousaw.

A settlement hearing was held on Sept. 27 at the Centre Wellington council chamber in Elora to discuss the final phase of the 100-hectare development.

In December of 2017 Sorbara/Tribute Nigus Holding Inc. appealed Centre Wellington Township and Wellington County’s non-decisions about phases two and three of the subdivision.

The affidavit prepared by senior planner Kevin Muir of GSP Group Inc. stated Nigus continued to work with the county and the township through 2019.

“The county and the township were engaged in the detailed review process with respect to phase three,” said Centre Wellington and Wellington County lawyer Peter Pickfield.

The township and county had four main concerns.

The second concern was an increased residential density and a mix of unit types and lot sizes. The minimum density is 16 units per hectare within new greenfield subdivisions. The draft plan increased the density to 19 units per hectare by adding dedicated multi-residential blocks, allowing numerous townhouses and including lot sizes that allowed for more detached dwellings.

“The bulk of phase three … is intended for street and townhouses but there are a number of multi-residential houses as well,” Muir said at the hearing.

He said the majority of Phase 3 was “un-lotted” blocks that would be approved at a later date by Wellington County. The township will also have a chance to sign off.

The third concern was the location of the park in phase three. The new proposed draft plan has a single, larger park on the south side of Colborne Street, as per suggestions by the township and its consultant, with access to existing and proposed public trails.

The final concern was the size of the commercial block at the southwest corner of Beatty Line North and Colborne Street. Originally the block was set at 1.52 hectares. Then it was reduced to 0.58 hectares after refinements were made to the street system. However, the township preferred the larger commercial block so the proposed draft plan has a 1.53 hectare commercial block.

Phase three also includes the realignment of Colborne Street, which was decided through a Class Environmental Assessment deemed complete in November 2013.

Alex and Derek Graham as well as Kate Allan (with her mother and sisters) attended the LPAT hearing as participants.

“We want to maintain our legal access to Colborne Street,” said Allan. “That is our primary concern.”

The primary access to Allan’s parents’ agriculturally-zoned property is off Wellington Road 18, but there is a legal access point off Colborne Street in the deed.

Allan said her family was not involved in the settlement discussions.

Pickfield explained that as he understands it, the Allan property was on an existing unopened road allowance of Colborne Street, which would continue to be maintained by the municipality even after the road is realigned.

Sorbara/Nigus lawyer Chris Barnett explained the unopened road allowance has nothing to do with the development because it’s outside of the subdivision land.

Alex Graham explained that she and Derek would prefer Colborne Street stay in the same position but be upgraded to a more modern road.

They also suggested space for a roundabout be allocated to the area in front of the Allans’ property on Colborne to allow for the possibility of an additional entrance in the future.

“We feel it should just stay where it is,” Alex said.

Transportation engineer Henry Centen, of Burnside, completed a traffic study for the new development. He has been involved on the project since 2007.

Centen said there were seven options available for the realignment of Colborne Street from the Class EA. The preferred realignment is included in the proposed draft plan of subdivision. The realignment was approved by the ministry in 2013, Centen confirmed.

“From a transportation point of view, we believe this is the safest and most appropriate design for the phase three subdivision,” Centen said.

Tousaw said he wanted to review details of Muir’s affidavit and witness comments before coming up with a decision. He also said he would be looking at all the evidence and consider the issues the Grahams and Allans presented.

However, he advised it is not common for the tribunal to deny a draft plan of subdivision where the township, county and developer have come to an agreement.