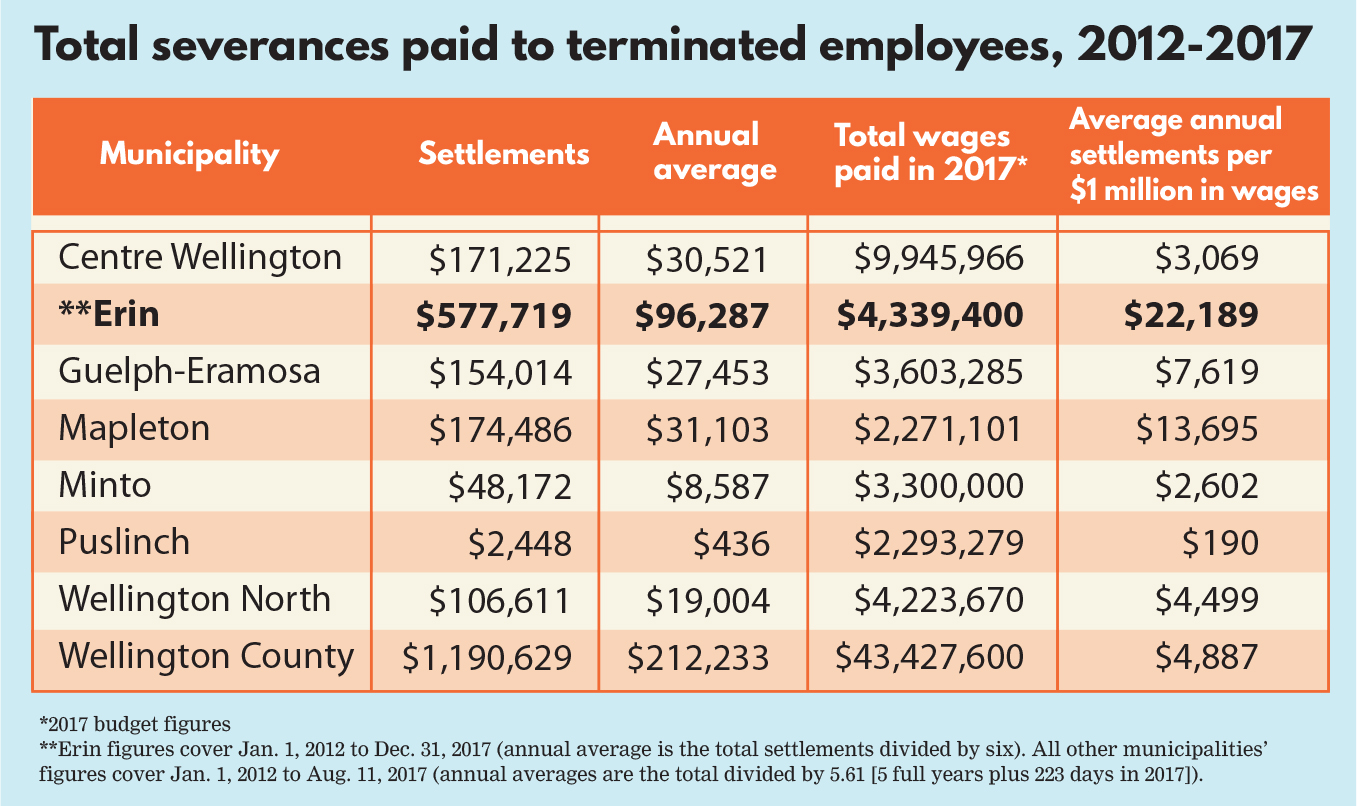 ERIN – After almost two years of outright refusals, conflicting explanations and failed legal arguments, the Town of Erin has now decided to provide employee severance information sought by the Advertiser.

She also stated “staff have conducted an additional search and can confirm that no records have been destroyed.”

Previously, Erin officials suggested records “would have been destroyed after three years” – even though town policy states six years –  but also declared they “cannot confirm whether or not records were destroyed.”

In her 100-second video, Campion states the town is “reviewing our records management practices, providing further training to all staff and implementing a new and electronic data records management system which will create efficiencies in retrieving our data in a more effective way.”

Campion stated that although “there is no obligation on the town” to calculate the single dollar figure sought by the newspaper, she can confirm the amount for 2012 to 2017 is $577,719.

Erin’s six-year total is more than three times the next highest total for municipalities in Wellington County – and greater than the next three highest combined (Erin’s total is the only one that includes all of 2017).

The six other lower-tier municipalities in the county provided their totals to the Advertiser within months – and most much earlier – thus avoiding a newspaper appeal to the Information and Privacy Commissioner of Ontario (IPC).

The Advertiser was denied an opportunity to speak to CAO Nathan Hyde – and indeed any other Erin staff member – about the matter.

She added “staff are respecting the process and will await further communications from the IPC.”

Asked why the town would release the severance information via social media, Mayor Allan Alls told the Advertiser, “We were trying to get our message out, instead of the one you guys might like to write.”

Alls stressed members of council were not involved in the FOI/IPC process, noting, “it’s the clerk who makes decisions on privacy issues.”

Asked if, in hindsight, he would have handled the situation differently, Alls replied, “Probably.”

Regarding the timing of the release of the total severance cost, he said, “Up to now, the staff could not find the records, so we couldn’t say anything. None of it would be accurate.”

Alls added, “The payroll system changed in between all this going on. So although records weren’t destroyed, our people had trouble finding the information that was there.”

Erin’s six-year total is the highest of all lower-tier municipalities in the county likely because, “There were some pretty high-paid people, even before my council, that were let go,” he explained.

Alls acknowledged that releasing the municipality’s “gross number,” showing the total severance cost over several years, does not constitute an invasion of privacy.

IPC adjudicator Jessica Kowalski told the town on Aug. 9 that she was “not satisfied” with its response to her interim order directing Erin officials to conduct further searches for severance records.

Kowalski gave the town until Sept. 6 to explain  “when, and what, responsive records were destroyed” and to clarify a discrepancy between town policy (stating records are to be retained for six years) and an affidavit from Campion (stating records are kept for three years).

The additional searches were ordered after the IPC rejected the initial town submissions filed by Bay Street law firm Aird and Berlis that argued the newspaper’s request was for a single document that does not exist – and the town is not required to create a record.

The original FOI request was filed in the fall of 2017 as part of an Advertiser request to all Wellington County municipalities for the total amount of severances paid to terminated employees from Jan. 1, 2012 to Aug. 11, 2017.

The request was made in response to what appeared to be a large number of firings by some area municipalities.

– With files from Phil Gravelle