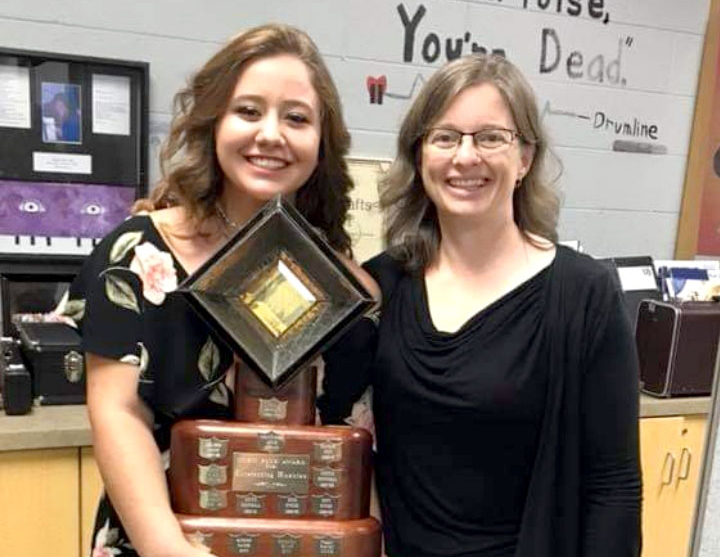 “I feel like this award is for Erin District High School more than just for me and I just happen to be the name on it,” Cameron said in response to receiving the award.

Cameron was nominated by Allison Harrod, a 2017 Loran Scholar, for her impact on Harrod while attending EDHS.

“I’m a little embarrassed because I don’t feel like it’s anything I’ve done amazingly; I was just doing my job and I happened to connect with Ally,” Cameron said.

“When you’re a teacher your goal is to make a difference in somebody’s life and so with Ally that worked, I got that.”

Cameron began teaching in 1997 in Peel where she taught for two years before taking a 10-year hiatus to focus on her five children.

In 2009 she returned to teaching where she started out as a supply teacher, which turned into long-term occasional teaching positions and later landed a permanent position in the EDHS music department in 2014.

“I feel like every teacher has that student here or there that it works and so I feel weird that I get to be the one that’s publicly recognized even though the teachers around me are doing that every day.

“It’s always great to be remembered because you put so much work into these kids and hope things work out for them and contriving successes.”

Cameron said it was a real honour to be nominated by Harrod, as the two shared a personal connection.

“It was pretty special because Ally is a special person anyways and she and I really did have a great personal connection,” she explained. “We spent a lot of time on extra curriculars together and I was the teacher she would come to kind of either vent or spend some safe time.”

Harrod said Cameron inspired her to try and take on challenges in a positive way, adding that seeing someone who actively chose to be positive no matter what was really inspiring for her.

“She was always a good role model in terms of how to take on challenges and how to be positive in the face of adversity,” Harrod explained.

“She always created an environment where we always felt we could exist, and we were allowed to take up space and weren’t a burden.”

Cameron said she’s always striving for excellence with her students, but that doesn’t necessarily mean perfection. She hopes to promote excellence and then give students the tools needed to be able to reach it.

“I talk about achieving the impossible because things look impossible at the beginning and then with practice and teamwork, we end up achieving things that we didn’t think we could achieve,” she said.

“So, I’m hoping that lasts with students, that things that look hard are usually worth it and they can do it. Not to be shied away from things that are hard.”

“It’s so helpful I think to be able to go through life with that mindset of if I don’t have this, I don’t have it yet,” she explained.

Harrod explained she wasn’t always confident in her musical abilities, but Cameron reassured her that was okay and made her feel that her love of music was just as valid as everyone else’s.

“She genuinely enjoyed being around all of us and taking to us and hearing what we had to say. It felt like our voice mattered,” she said.

“It was really great to watch myself grow over that time and have her be able to guide me towards being able to help other people grow too.”