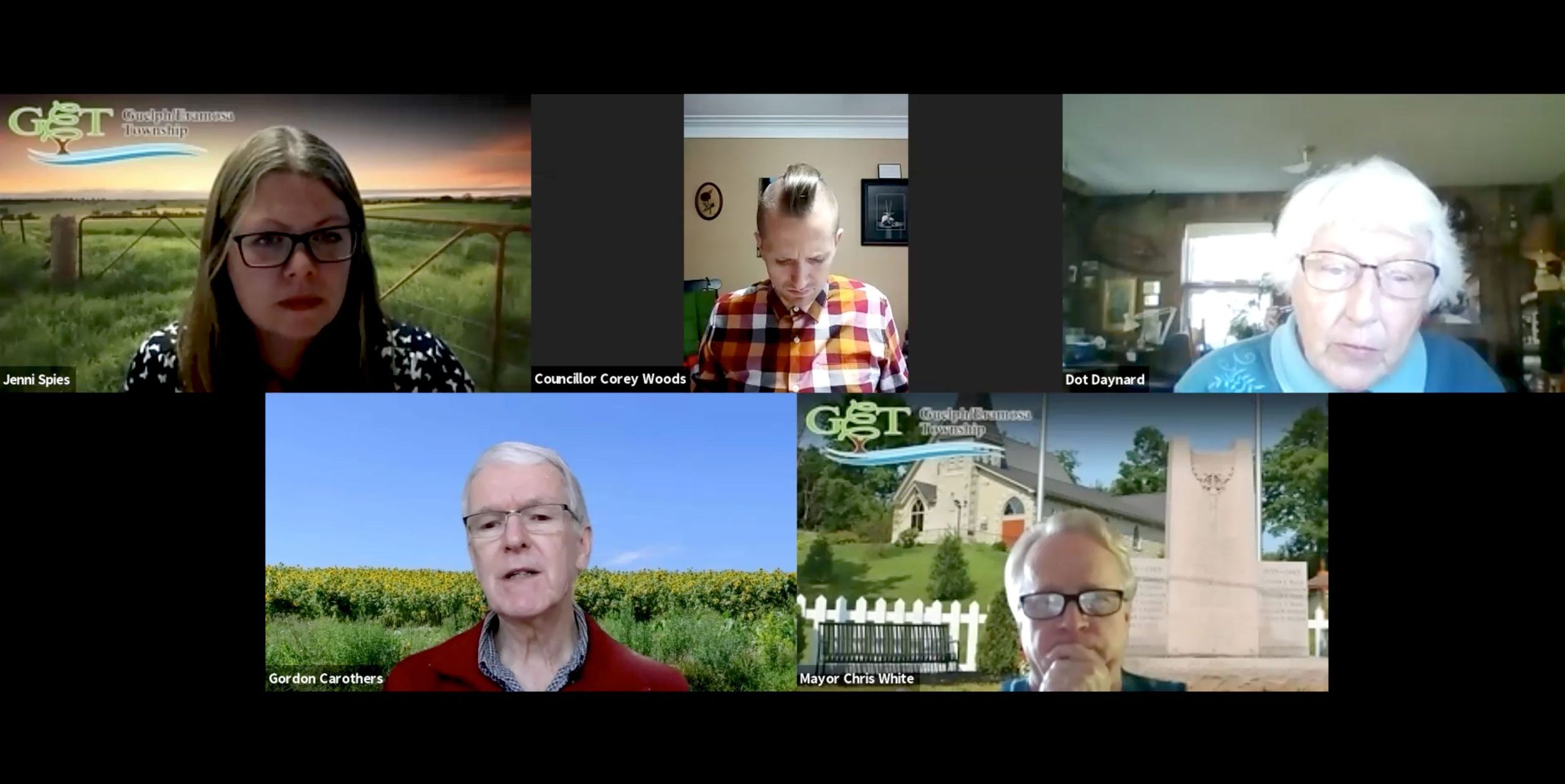 Guelph/Eramosa staff have identified eight names from the Rockwood cenotaph that currently don’t have streets named after them in the township. Previously township officials had announced all names from the cenotaph had been used. (Screenshot from Sept. 29 meeting)

GUELPH/ERAMOSA – After being advised all the names from the Rockwood cenotaph had been placed on township street signs, the heritage committee has been notified there are still eight names without a sign to accompany them.

In a Sept. 29 meeting, members of the heritage committee heard from deputy clerk Jenni Spies on matters regarding the township’s street naming policy, cenotaph names used on township streets, and the replacement of veteran street signs.

The committee was provided with an inventory of veterans from the cenotaph and their corresponding street name.

Staff identified eight names from the Rockwood cenotaph that currently don’t have streets named after them in the township.

Previously officials had stated all names from the Rockwood cenotaph had been used.

Members of the committee expressed concern about whether the township will be getting additional streets in the future where the names could be used.

“How many more streets are we even going to have in Rockwood?” councillor Corey Woods asked.

“I can’t see a world where we have eight new streets built in Rockwood … I almost feel like every new street we have to use these names.”

Woods said he’s doubtful there will be additional subdivisions built in the township anytime soon.

“We’ve got a list of eight names and we’ve got to get them on a street somehow,” he added.

“We’re going to have to come up with perhaps another way to recognize these folks beyond street names,” White noted, adding “first and foremost” the priority will be to get the names from the cenotaph onto street signs. 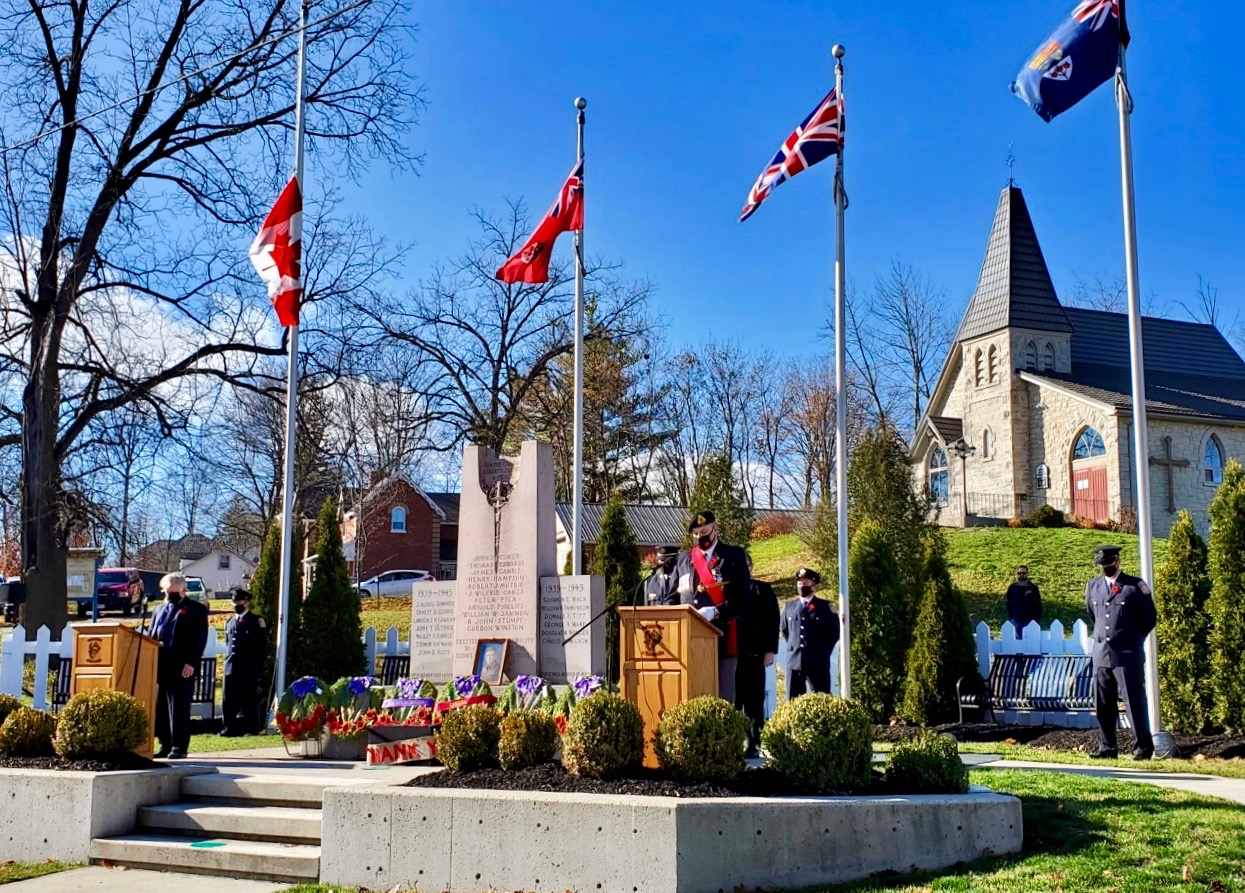 The township will also see the replacement of 16 veteran-named street signs to ensure they include an image of a poppy.

Following the recent naming of Donald Fraser Lane in July, staff were alerted that the street signs in the township commemorating Guelph/Eramosa’s war dead currently don’t have any form of signifier to alert passersby the street is named in their honour.

The public works department, in discussion with staff, put together costing and proofs for the replacement street signs. Council opted for the design of white signs with green lettering. All new signs will include a poppy signifier.

The public works department has offered to cover half of the costs and provide the installation of the street signs. The total cost for the initiative is $1,263 including taxes, with the heritage committee responsible for $632.

Spies noted the public works department has anticipated the replacement signs could be installed in time for Remembrance Day, but White cautioned members of the committee to only proceed prior to Remembrance Day if staff can ensure all signs will be replaced in time.

Recognizing the short timeline of less than five weeks, he noted that, with the pandemic, the committee needs to be wary of unexpected delays like supply chain issues.

“I don’t want us to do something in a rush with all the respect that needs to be due for the process. We need to have a clear, mapped-out plan,” White explained, adding he didn’t want to see only half the signs replaced by the Nov. 11 deadline.

“This is a very important thing that we do this completely,” he continued. “I just want to make sure that this is treated with all the respect it deserves.

“I think if the committee fully supports moving ahead with this, I’m 100 per cent in agreement, but let’s make sure if we commit to doing this before November 11th, it’s done properly, cleanly and everybody’s included.”

The committee directed staff to work with the public works department to order the replacement street signs, authorizing staff to use the committee’s budget to pay for half of the costs.

In an email to the Advertiser, Spies said the township hopes to have the new signs up by Remembrance Day, but she is reluctant to give a firm deadline given any unexpected delays.