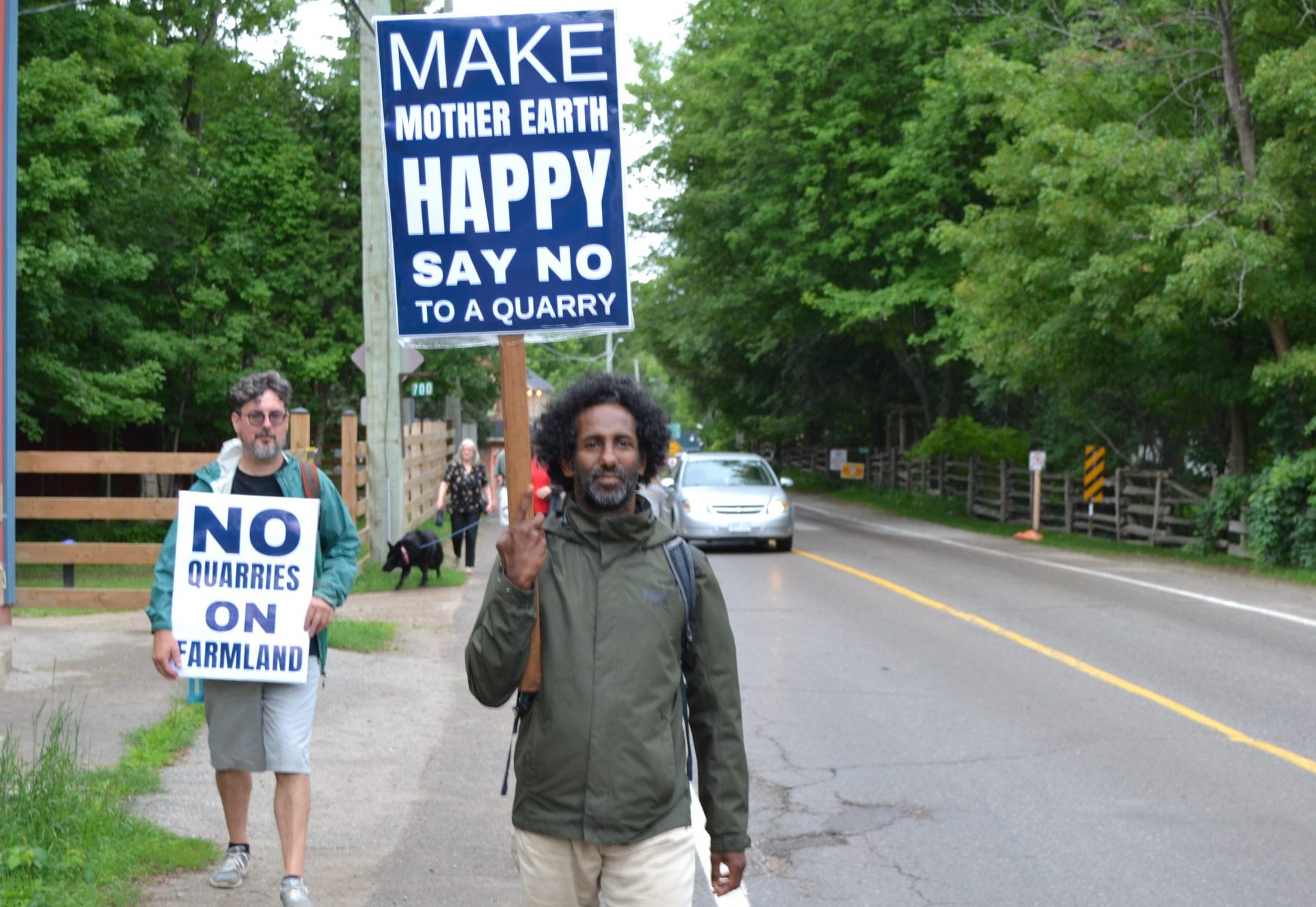 Shane Philips and the Wellington Water Watchers have joined forces again for the second phase of the Ear to the Groundwater Tour. The tour began on July 13, focusing on opposition to gravel mining operations. Photo by Curtis Gordon

ERIN – Shane Philips and the Wellington Water Watchers (WWW) have once again teamed up to begin the second phase of Philips’ Ear to the Groundwater Tour across Wellington County and surrounding areas.

In June, Philips, an activist and singer/songwriter from Guelph, walked to the two active wells owned by  BlueTriton Brands – in Aberfoyle and Hillsburgh – to oppose the company’s application for a 10-year extension on its permit to extract water from the wells.

The second phase of the tour focuses on gravel mining. Philips and the WWW say they are seeking to raise awareness for the devastating effect gravel pits and quarries have on communities and the environment.

From July 13 to 21, Philips will walk 91 kilometres to seven communities in the area where quarries for gravel mining are either operating or proposed.

On July 13, Philips and the WWW began phase two of the tour at the site of a potential quarry, proposed by CBM St. Marys Cement, owned by the Brazilian conglomerate Votorantim Cimentos.

The site is next to Cataract, a Caledon neighbourhood, where the tour highlighted the impact of the a potential quarry and discussed aggregate impacts.

Philips said despite the fact this phase of the tour is focusing on gravel mining, the water issue is still front and centre.

“This is a water issue at its core,” Philips said.

“The aggregate business, they just take as much as they want. As much as the government’s willing to hand out; they’ll just keep taking. We need to start putting limits on that. It’s endangering our water and destroying the landscape.”

Philips said blasting below the water table should be banned, as it destroys clean drinking water.

“All of these new permits should stop. We should start putting research and technology into better ways to develop,” he added.

“Fundamentally, people need to understand that any well below the water line is a hazard to all of our health—not just to the environment, but to the health of the people that drink the water.”

Philips was critical of the way elected officials have dealt with the climate crisis.

“We actually have to be implementing policies that reflect our vision.”

Philips compared the fight against CBM to his opposition to BlueTriton, urging people to fight the climate crisis by consuming less and buying from sustainable sources.

“This is a massive proposal. It may be upwards of 800 acres, and 80-feet-deep,” said David Sylvester, president of Forks of the Credit Preservation Group.

“Our community will be left with a gaping wound on the surface of the Earth that cannot be rehabilitated. That really is going to compromise the fabric of our community and our local countryside as well.”

Sylvester said tens of millions of litres of groundwater would be pumped out.

“It’s just inconceivable that one could take that much water, pump it out of the ground, and then pour it into a river without creating profound ecological impacts on the river,” he said.

“There is a very sensitive brook trout habitat in that part of the West Credit River, and that’s vulnerable.” 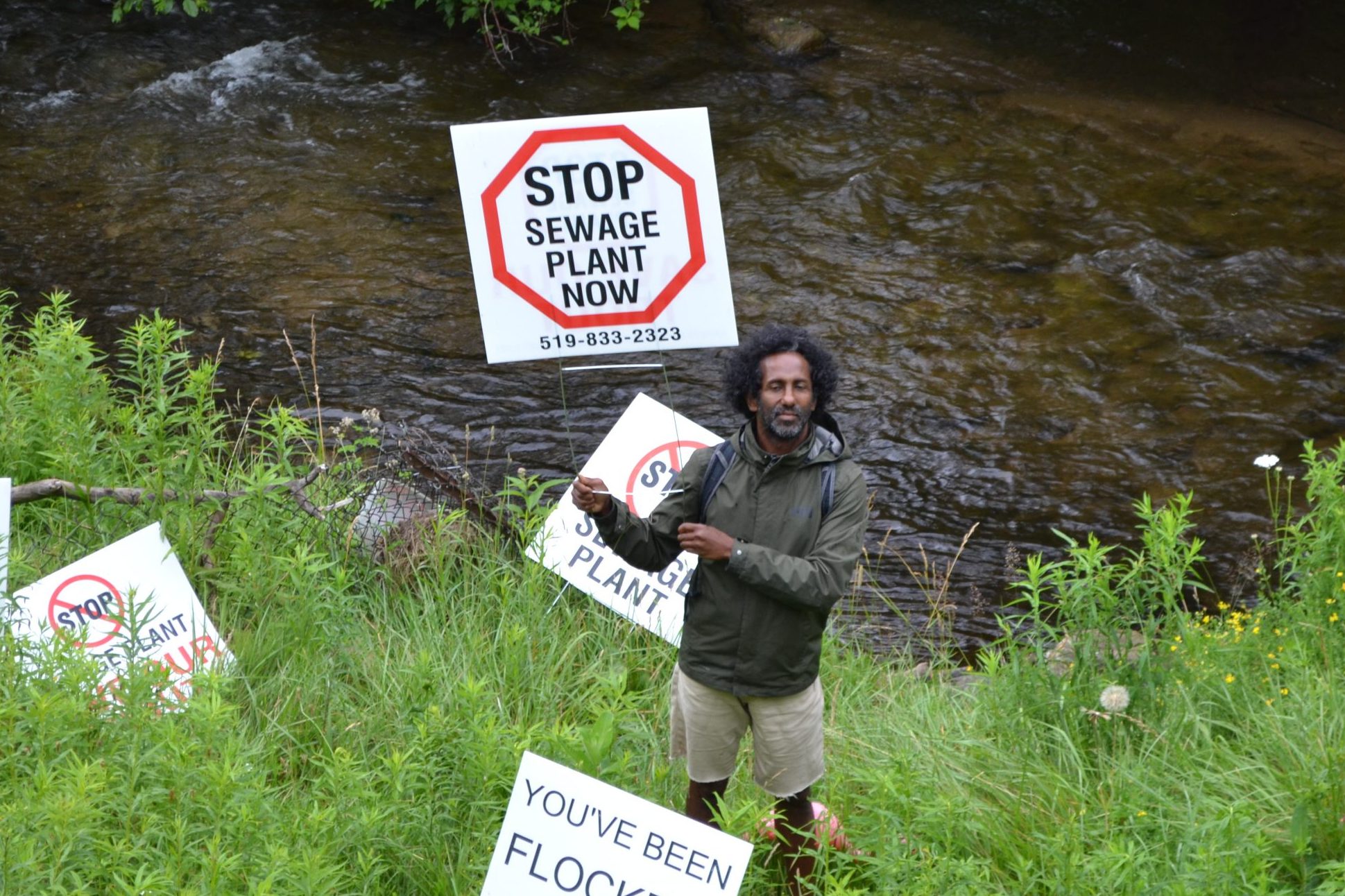 Shane Philips next to the Credit River with a sign protesting the proposed Erin Wastewater Treatment Plant project. Photo by Curtis Gordon

After the Caledon stop, Philips and the WWW continued to the West Credit River, underneath a bridge at Winston Churchill Boulevard and Wellington Road 52, to highlight what they call an additional impact to brook trout by the proposed Erin Wastewater Treatment Plant.

The Water Watchers agree there will be a negative downstream impact of the quarry on the brook trout’s river habitat.

The Watchers also believe daily dewatering of groundwater into the West Credit River poses a threat to the river, along with the threat posed by the wastewater plant.

Belfountain Community Organization president Judy Mabee said many people are worried about what effect the proposed quarry could have on their wells.

“They’re worried about not having access to water at all,” Mabee said.

“Being in the location that it is, there is no ability for water from Lake Ontario to be pumped into this area.”

Mabee said for the fish inhabiting the Credit River, it’s very important for water conditions to be right.

“For brook trout, they require 19 degrees as a maximum (temperature). Everything is very temperature sensitive, and ecologically sensitive to maintain this species.”

Votorantim Cimentos director of land and resources David Hanratty stated in an email to the Advertiser that by the time the company’s studies are completed, any potential for a negative environmental impact will be known, well understood, and a plan in place to prevent it from occurring.

“The end goal is to design an application that will not have any negative environmental impact on features such as the Credit River or any of the habitat within the river,” Hanratty stated.

“We take this responsibility very seriously and would only be granted a license in Ontario if our proposal sufficiently indicated this would not happen and we were able to prevent it.”

Philips ended the day by making the four-hour trek to the tour’s next stop in Acton.

The Ear to the Groundwater Tour will continue throughout the week, including stops in Rockwood and Puslinch.