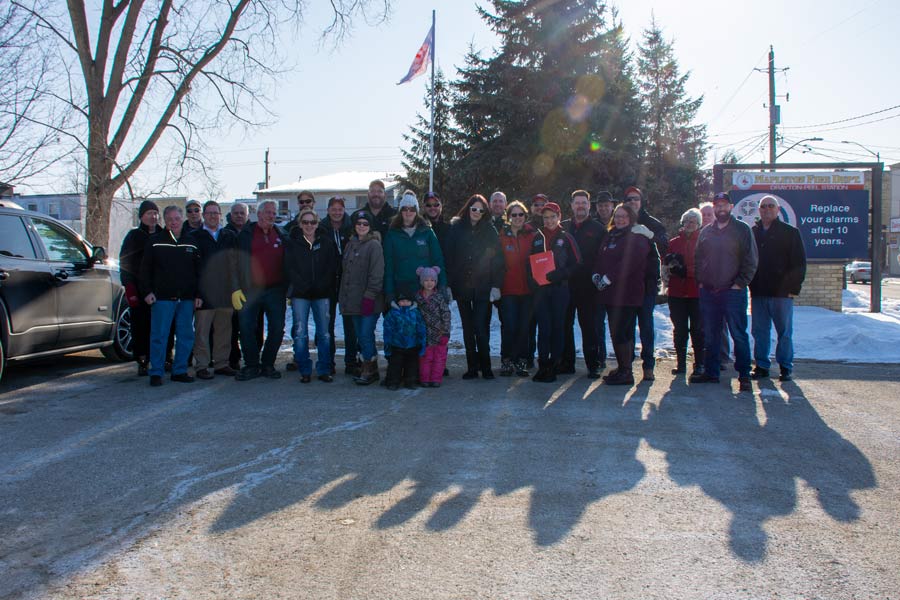 The Kinsmen and Kinettes of Drayton held a flag raising ceremony that day at the Drayton Fire Hall for the 100th anniversary of Kin Canada.

The first Kinsmen Club was first established on Feb. 20, 1920 in Hamilton. Now the service organization has clubs from St. John’s, Newfoundland to Victoria, BC.

In Drayton, the Kinsmen and Kinettes have been involved in all sorts of community projects, from creating the Kinsmen Park with ball diamonds and soccer fields to getting a splash pad for ABC Park.

“Our mission is to serve the community’s greatest needs,” Frere said.

The Kinsmen are also working on getting some shade shelters for Kinsmen Park and ABC Park.

In honour of the 100th anniversary, the Drayton Kinsmen put aside $10,000 so they could give $100 to school classrooms in Mapleton Township that come up with a fundraiser to better the community.

While there is no restriction for how the money is used, it must be spent helping others in a community in Canada.

While the original has passed, the Kinsmen are extending the deadline to the end of 2020 to get more classes involved. Email draytonkinsmen@gmail.com for an application or to obtain more information.

Perth-Wellington MP John Nater was out at the early morning flag raising offering his congratulations.

“I think it’s a remarkable accomplishment and testament to 100 years’ worth of volunteers in communities and with clubs all across Canada and a special thank you to the Drayton Club,” Nater said.

“Congratulations on Founder’s Day, on 100 years and on Kindness Day as well. It’s so important that we have these great community services in our community.”

After the flag raising, Kin Club members headed out to complete random acts of kindness for the Mapleton community.