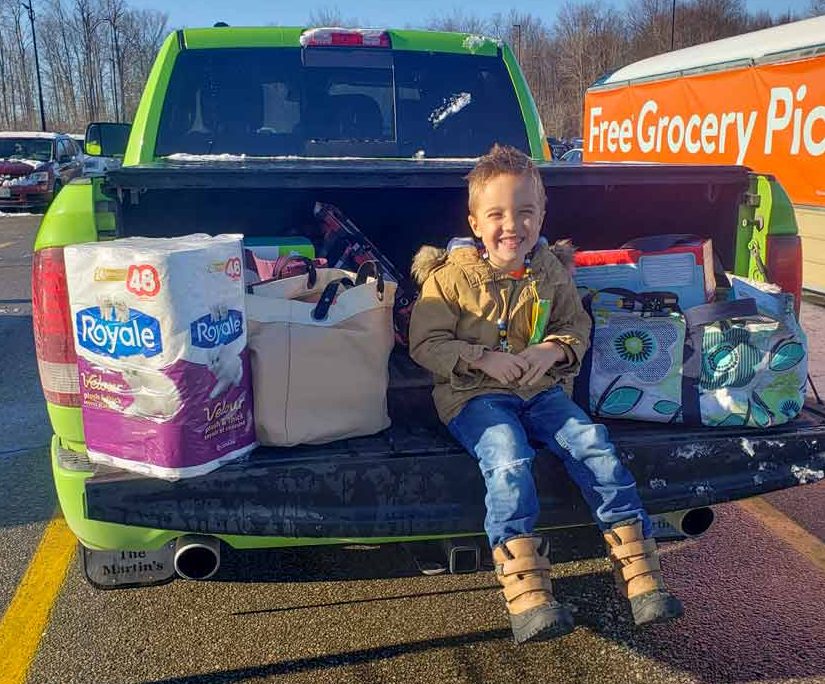 The four-year-old Drayton boy, with the help of his mom Holly and dad Brian, raised $300 to buy toys for the Kinette Club of Palmerston and District toy drive and food for the Mapleton and Minto food banks.

“We’ve had a lot of people help us in the past,” Holly said.

“[Chase] was actually born prematurely so we spent some time in the hospital with him and we had quite a village of people really help us out over that time because it was really difficult.

“So every year since he’s been born we’ve really tried to, over the Christmas break, kind of give back for what we felt like we were given.”

And this year Chase took an interest.

“He did really well with learning the concept of kindness over Christmas last year,” she said.

“And so this year he decided he wanted to bake cookies and sell them.

“I don’t know if he fully understood what that really meant, but that was what his suggestion was and it really filled my heart.”

Holly set the goal of selling 10 batches of chocolate chunk cookies for $10 so Chase would raise $100.

However, the community support was overwhelming and some people contributed more than $10 and others contributed without actually purchasing the cookies.

“I had just put it on Facebook, just to some of my friends, and said if anybody was interested in helping Chase reach his goal and the response was overwhelming,” Holly said.

She posted the call out about a week and a half before the cookies were distributed on Dec. 2.

“We packaged them up in these cute little jars with a little note of thanks and then everybody got what they hopefully wanted,” Holly said.

Most purchasers picked up their packages from the Martins’ porch in Drayton and others were hand delivered.

Once they had the money in hand, Holly and Chase went shopping at Walmart to purchase his donations.

“I had explained to him the items that people would need so I said to him what are things that you use on a daily basis that you think somebody else might use as well,” Holly said.

“So we talked about toothpaste and shampoo and … we have a baby so he said diapers and things.

“So we went up and down the aisles and then he … said, ‘I want to get this, this, this and this,’ and then we totalled it up and I just said, ‘Okay it’s time to check out.’”

Chase said it felt “good” to buy the items and that he got everything he hoped to get for his donations.

Holly is a nurse at Palmerston and District Hospital, so she took Chase’s donations to the hospital to be given to the Kinettes and the food banks along with other donations collected at the hospital.

She said she feels pride in her son’s efforts.

“So much pride and then it’s also so much pride in not just him but in our community,” she said, adding the community has helped them meet their goals for their children.

“I think it speaks to not just him as a person but also the greatness of our community.

Chase plans to continue fundraising next year and raise more so he can purchase more items for those in need.