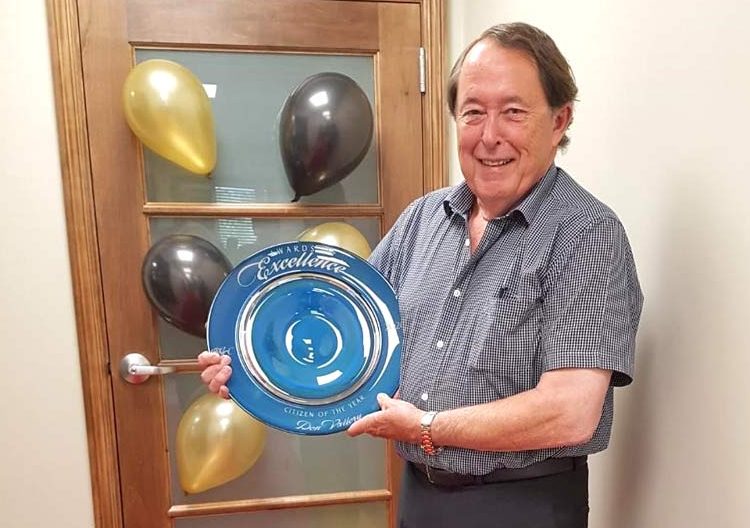 CENTRE WELLINGTON – After years of service with numerous organizations, Don Vallery has received the Centre Wellington Chamber of Commerce Citizen of the Year award.

Vallery received the award during a virtual presentation on June 18 – the final award in a week-long Awards of Excellence campaign that saw the chamber give out a handful of awards each day.

“I don’t know who picked me out of this group,” Vallery said in his acceptance speech, acknowledging the contributions of his fellow nominees.

“This is a great community and we are so lucky. I would encourage everyone in the community to get involved and make this your home.”

In a phone interview after the ceremony, Vallery said he’s amazed and humbled by the recognition.

“I just do this stuff,” he said. “Not to be recognized, but I’ve acquired a lot of knowledge along the way and want to share it.”

Vallery said his family has owned property in Belwood since the 1830s and he moved there in 1980.

He built two businesses on that land – Highland Pines Campground and the Pine Meadows Retirement Community – and he has been involved in a long list of service groups and community projects ever since.

“Then you get to know what’s going on. That’s how I got involved in things.”

That involvement has turned into quite a long list over 40-some years.

Vallery was on the Official Plan planning committee for the township, has had several roles with the Groves Hospital Foundation, and built the township-owned medical building on Queen Street – for free – that helped attract doctors during a physician shortage.

He is a member of the Centre Wellington Community Foundation’s investment committee, is chair of the township’s economic development advisory committee,and sat on the COVID-19 recovery committee last year.

Vallery is also on the healthy growth advisory committee and recently became an advisor for the Integrated Youth Services Network.

Lori Arsenault, executive director of the Groves Hospital Foundation, stated  in an email that she wrote a letter of support for Vallery’s nomination.

She told the Advertiser his support was instrumental in getting the foundation to its $20-million fundraising goal for the new Groves hospital.

“He played a critical role in helping to establish our leadership cabinet, which collectively raised over a third of our goal, and was a member of the campaign advisory committee for the New Groves Hospital campaign,” Arsenault wrote.

She added Vallery’s business, Pine Meadows Retirement Community, was one of the first sponsors of the Gala for Groves event in 2020, and Vallery shared his own health story and experience at Groves hospital to encourage more donations.

“Don’s commitment to bettering Centre Wellington for future generations and his kindness make him well deserving of the Citizen of the Year,” Arsenault wrote.

Vallery said his passion is economic development and sharing his knowledge and that those interests have come together in his volunteer work.

“People need jobs and places to live and businesses need to thrive. That’s my bottom line,” he said.

“And I know how to do this stuff. So why wouldn’t I want to help?”