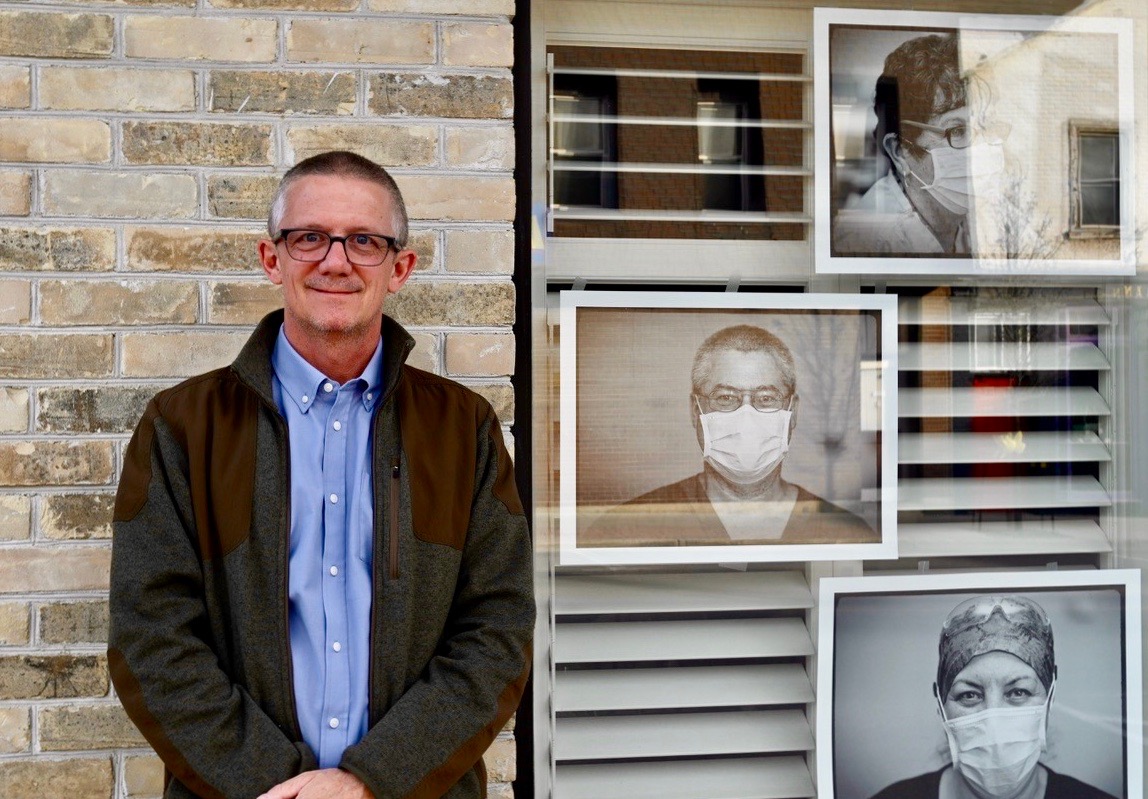 The eyes have it - Dr. Christopher Rowley has displayed in the windows of his Mount Forest office portraits of masked and goggled nurses of Louise Marshall Hospital who have been on the frontline of during the COVID-19 pandemic. Submitted photo

MOUNT FOREST – The devastating impacts of the COVID-19 pandemic can be observed in many ways across society, but from Dr. Christopher Rowley’s vantage point, it’s all in the eyes.

“I’m in the hospital every day and all you see of people are their eyes right now,” said Rowley.

“I think we’ve lost so much with that loss of emotional context – what we’re seeing and doing – and all you see are the eyes. And our nurses, as always, are on the frontlines of all of this … they’re the ones doing all the close care and all the personal care.

“The doctors, we make the big decisions, but the real personal care is from the nurses and so all you can see of them is their eyes … eyes that are kind and smiling and compassionate – and some days frustrated, probably.”

Rowley is chief of staff for North Wellington Health Care, which operates Louise Marshall Hospital and Palmerston and District Hospital.

He’s been a family physician in Mount Forest for 20 years, but it’s his compelling camera work that’s currently turning heads of those passing by his Main Street office.

Rowley has displayed 11 black and white portraits in his office windows. The portraits are of the masked and goggled nurses of Louise Marshall Hospital who have been on the frontline of care during the pandemic.

Rowley, an avid amateur photographer, took his camera into the hospital to try to capture what the nurses have been up against for several weeks.

“I wasn’t sure what I was going to do them when I did them, but I like the way the photos turned,” said Rowley in a May 5 telephone interview.

“The focus on the eyes and everything else blurred out and just really bringing out the humanity and the care of the nurses who are really on the frontline of all of this.”

Rowley said the purpose of the exercise was twofold, also including “a little creative project to keep my sanity through all of this, like everybody else.

“I wasn’t about to start crocheting or baking bread. This was my little project to get through this.” 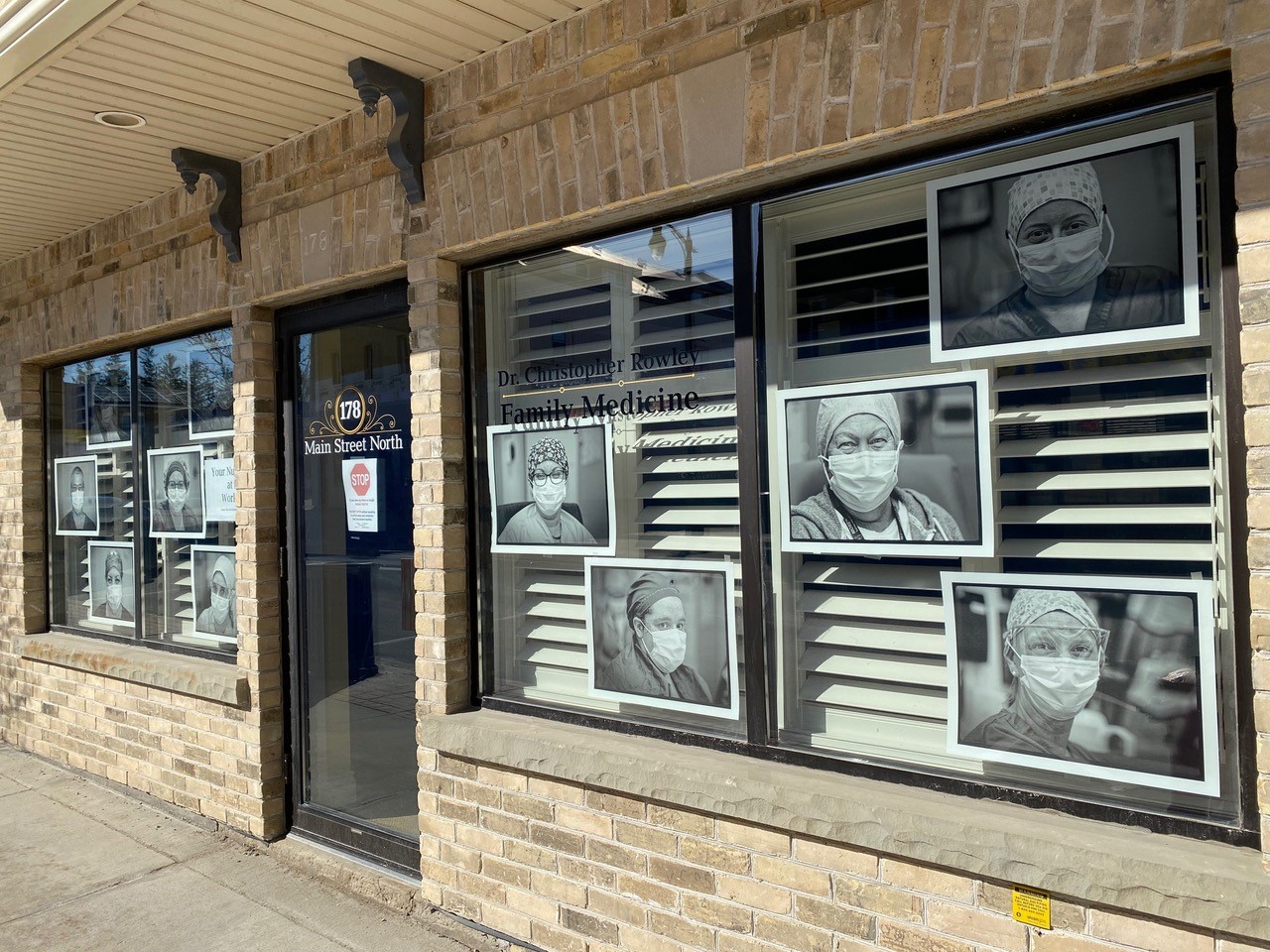 However, the primary goal “was just appreciation for the nurses … who are doing all the hard work – and the dangerous work to be honest – as they always do .”

That’s why he decided to display the photos where the public could see them.

“I really wanted to let the public know who these people are,” said Rowley. “You can’t see their faces, I mean most of them wouldn’t have wanted to be singled out or named in public, so it’s not about putting their names out or celebrating them that way.

“But just, as a group, to celebrate the nurses and again those kind, caring, tired eyes who we’re all relying on right now. And I think the public needs to see that, the conditions the nurses are working in, and the compassion that’s still there and hopefully that comes through in the photos.”

“I really wanted to share it with the community. I think in a small-town community like the Wellington area people rely on their hospital and are very keen to support it and right now we have no visiting, no elective surgery. I think just to share what’s going on with the community was important too.”

Though Louise Marshall Hospital hasn’t been confronted with a large number of COVID-19 cases, the response to the potential danger the virus poses has turned life upside down for the staff.

“We had a handful of cases very early on and none since. But it was a month of constant change, not even daily, twice a day we’re adapting and changing getting ready for this possible big surge of cases,” Rowley explained.

“I think that Ontario and Canada have done a great job with the social distancing and we haven’t seen that overwhelming surge. But it was a month of preparing and changing everything we know. Everything we’ve done for a decade suddenly had to be thought about from a completely different paradigm.”

He added, “So it’s been stressful for everybody … Maybe this was the start of the idea. The first couple of weeks, when I looked at the nurses it seemed they were all eventually on the edge of tears at one point or another because of the stress of the change early on. That has all settled down now. We’re into this new normal and the stress has lessened I think.

“But that emotional strength and fragility early on was very apparent to me … maybe that was the inception of this idea, that just the eyes are all we get to work off with people … It’s a peculiar time, you know?”