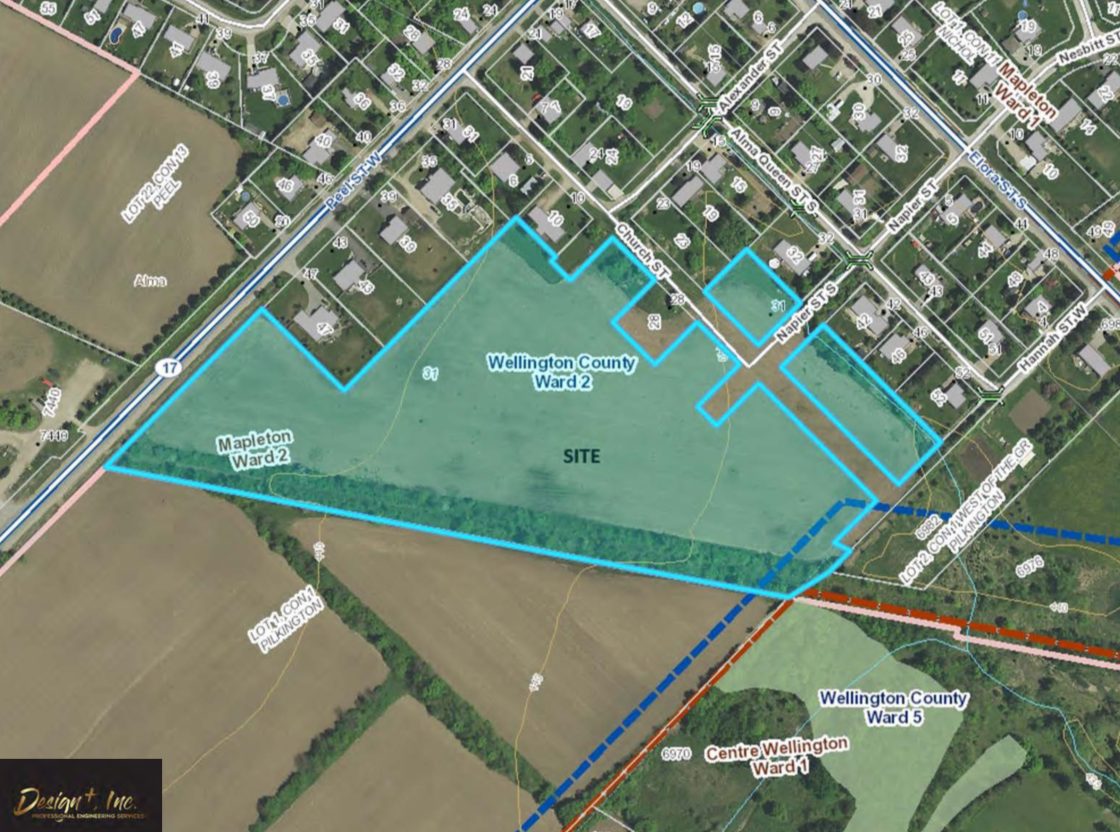 Desired Living is proposing a 250-unit retirement complex in Alma that could also include a greenhouse operation.
(Mapleton Township agenda image)

ALMA – Mapleton council has received more details of an offer of partnership from a local developer on a proposed retirement complex of up to 250 units here.

Developer Stuart Roxburgh, CEO of Desired Living, is proposing the development at 31 Church Street at the southern edge of the village and invited Mapleton Township to be a partner in the venture.

Proposed greenhouses on the site would provide products to the retirement complex and for commercial sale. An arboretum is also part of the preliminary plan.

Roxburgh, who initially presented the idea to council on April 28, fleshed out details of the partnership proposal to council at its May 12 video-conference meeting.

Under the terms of the proposed partnership, Roxburgh told council the township would receive 15 per cent of the net post-construction proceeds collected from the entire operation.

In return, the township would provide support for applications to receive further grants and interest-free money from other levels of government.

The developer explained the township’s involvement will enhance both the potential grant amounts and the chances of successful applications.

For example, Roxburgh explained the federal government’s Green Municipal Fund will contribute up to 80% to a maximum of $10 million in grants and loans for private sector/municipal-partnered environmental projects.

Projects must contribute to cleaner air, water or soil via sustainable transportation, land use or greenhouse-gas reduction; or energy, waste or water management.

In addition to supporting grant applications, the developer is asking the township to:

“The main reason why we’re looking at partnering with you folks is we want to this be a community complex,” Roxburgh told council.

“We want some dividend money coming back to your as a township.”

He stressed the project has the potential to receive more upper tier grant funding “if we include the township as a partner.”

“There are a lot of asks here,” said councillor Paul Douglas. “I’m just concerned about some of the partnership points.”

Douglas asked if the development would still go ahead of the township decides not to be a partner in the venture.

“In short, yes,” said Roxburgh. He explained that while the partnership deal would facilitate access to some funds, it wouldn’t make or break the project.

Douglas asked if Roxburgh could estimate how much the township would receive from a 15% stake.

“It’s projected at around $231,000 per year,” Roxburgh replied. “But obviously it has to be up and running before it can get there.”

Douglas also asked when the “post-construction” phase would begin.

“In theory it would be in two years. I’m hoping to put shovel into ground in 2021, spring,” said Roxburgh.

Councillor Michael Martin said the township would automatically provide some of the assistance Roxburgh is requesting through the partnership as a matter of course.

“Some of the asks – I think you could probably expect anyway for a development the size of yours,” said Martin.

“As far as the assistance goes from Manny (CAO Manny Baron) and the staff … you probably don’t even need to ask. I’m sure our staff would be more than helpful with making sure you’re pointed in the right direction.”

Likewise, said Martin, “If you need to be on the agenda to speak with us formally” or assistance with communications “those are just all things you can expect.”

On the other hand, Martin noted the half-million interest-free loan might be harder to promise.

He pointed out the fate of a pending RFP for a major water and wastewater project “will affect our financial status.”

Martin asked, “Can the partnership be formally inked outside of a financial partnership to access these funds that you’re looking for?”

“What I’m looking for is a partnership with the council and it is amendable. So if the finances aren’t available from council … we can deal with that. It’s not a hard stop,” replied Roxburgh.

Martin suggested that township development charges can be phased in to offer some financial relief to the project.

Councillor Marlene Ottens noted the proliferation of COVID-19 in long-term care facilities has sparked speculation the government may move to limit private ownership of such facilities.

“As far as I know this would still be a go-ahead,” said Roxburgh, who added provincial and federal politicians had advised him “what they’re looking for is to make sure no COVID interactions happen between the retirement complex and other units.”

Douglas asked if Roxburgh and his partners “have any other similar developments.”

“This is the first one,” Roxburgh replied.

“What’s your plan to make sure you don’t lose money and makes sure the place is filled?” asked Mayor Gregg Davidson.

The development would provide several revenue streams, Roxburgh explained, including greenhouse produce sales, restaurant/café revenue, extra services for residents such as medical therapy, and income generated from the accommodation units.

“All in all, it is cushioned in these different formats to ensure that if there is some downturn in any markets it will be cushioned,” he stated.

“There is going to be a need. There is a need right now,” Roxburgh added.

“I’ve already been contacted by people (resulting) from our last council meeting and they are looking to get information.”

“I think the offer of 15% is probably actually quite generous in context of your asks.”

Martin continued, “My concern is not necessarily with the money, but with the optics. I would hate to have the optics of cutting corners or doing something untoward.”

Martin also asked how long the township could expect to receive a 15% share of revenues.

“What would the term be on that? Surely it can’t go on forever?”

“I was thinking forever to be completely honest,” Roxburgh replied. “Or until such time as council wants to be bought out.”

Davidson said he wasn’t sure how such a partnership would fit under the province’s Municipal Act.

“We will have to have some research done on that,” said the mayor.

“It’s a very good offer,” Davidson stated. “It’s something council will have to discuss … to see where we want to go down that road.

“Half a million is a significant investment for any community and we are a smaller community.”

Davidson added, “We will continue down the path of supporting this concept in principal … there’s going to be some push back from community members no matter where we put it, whether it’s in Drayton or Moorefield or anywhere, just for the vast size of what you have here.”

“I understand there’s going to be some pushback,” responded Roxburgh, who suggested the development would be less disruptive than a subdivision.

“The good thing is this is not going to be a whole bunch of homes put up and taking away from peoples’ backyards,” he stated.

Ottens asked, “If the township has a stake in this facility would it be run by a board then? And would there be a member of council or staff on this board as far as decision making goes?”

Roxburgh replied there would be “a member allocated” to Mapleton Township.

Council passed a resolution to accept Roxburgh’s presentation as information.