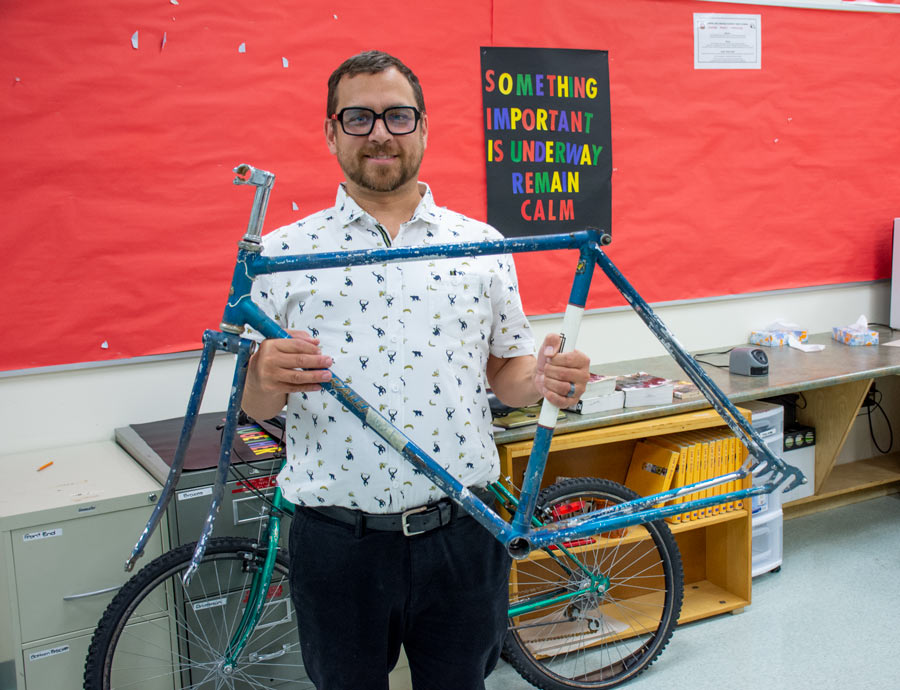 Bike share - Centre Wellington District High School teacher Matthew Arnold and his alternative education class have begun a CWDHS Bike Share with the hopes that the first bikes will be loaned out in the spring. Photo by Jaime Myslik

The service is still in its infancy and teacher organizer Matthew Arnold anticipates CWDHS Bike Share will loan out its first bikes in the spring.

Some of the students are in Arnold’s class for one period, some are with him all day.

One of the tools he’s using to teach his students is the CWDHS Bike Share service.  He explained that learning how to fix bicycles is a core skill.

“It’s an employable skill,” he said. “You can learn how to fix bikes and work anywhere in the world.”

Last year his politics and action course looked at the legalities of starting a bike share service.

“We looked in the insurance industry, we were collaborating with the insurance folks at the board office about this to find out what the qualifications were. What’s the standard of care that we have to practice? Voluntary assumption of risk?” Arnold said.

The class also applied for grants to help fund the service.

“These are all the little project-based learning pieces, which is where stuff like applied digital skills comes in,” he said.

The students use a host of different Google services to complete tasks.

For example, they created a repair checklist on a Google Form as well as a checklist that is “almost like a beginner’s test for students before they take the bikes out,” Arnold said.

Students must pass the checklist with 100% to show they know the Safe Cycling Ontario guidelines before they can take the bicycle out on the road.

“We’re hoping to teach a whole new generation of students around Centre Wellington to be safe cyclists,” Arnold said.

The students also created a map of safe cycling routes throughout Centre Wellington, including side roads and trails.

The service has received donated bicycles from the Bicycle Taylor in downtown Fergus that students fixed up and have ready to go.

Arnold is waiting on more grants and funding to purchase helmets and other safety items to include with the bike rental.

Each year students will keep track of bicycle bookings and maintenance schedules, in addition to actually maintaining the bicycles and ensuring they’re in good repair. Another Google document will track the inventory catalogue of parts available for repairs.

In addition to the students in his class who benefit from running the bike share service, other students in the school will have access to renting the bikes.

Arnold hopes some students who have trouble getting to school due to lack of transportation will be able to rent a bike and get to school or extra curricular activities on time.