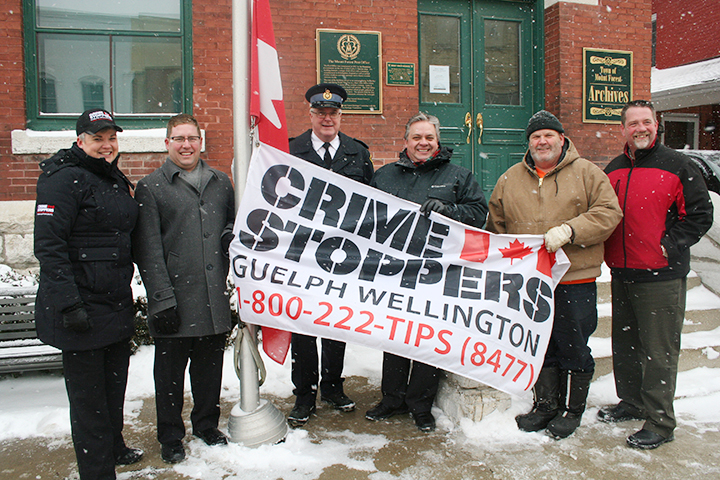 MOUNT FOREST – It’s time to recognize the efforts of a local program dedicated to solving crime in Wellington County.

This year’s slogan is Say It Here, to encourage people to bring information to Crime Stoppers “rather than just sitting on it.”

“We do a lot of community events and have a couple coming up over the next few weeks,” he said.

One such event is a Darren’s Day event in Palmerston on Feb. 18 and a trivia night at the Lighthouse Restaurant at Elora’s Grand River Raceway on Feb. 9.

“We’re always on the lookout for new board members,” West added.

Bowers-Peter said the purpose behind Crime Stoppers Month is to bring awareness of the organization and its activities.

“We’re trying to get everyone across the country at the same time focussed on Crime Stoppers and local initiatives and partnership,” she said.

Wellington OPP Staff Sergeant Bruce Aitken said Guelph Police and the OPP have benefited from utilizing Crime Stoppers information for the past 31 years.

“It is an important partnership,” he stated.

As a volunteer organization, it is a working group – it is not just about coming into a meeting once per month.

“But it’s a fun board and a good group of people and we have a lot of fun. We are looking for people who want to make a difference in their community.”

She noted the statistics from 2018 are tremendous.

“It’s amazing to have that kind of support, whether it is fundraising, the tip line or just recognition of a program,” said Bowers-Peter.

“It’s not just about Crime Stoppers, it’s about working with others in the community, community groups, organizations and pooling our talents.”

She also spoke of tremendous support from the Wellington North community.

Wellington North Mayor Andy Lennox added, “It’s an opportunity for people to participate in keeping their community safe. There’s not that many opportunities and this is a great one.”