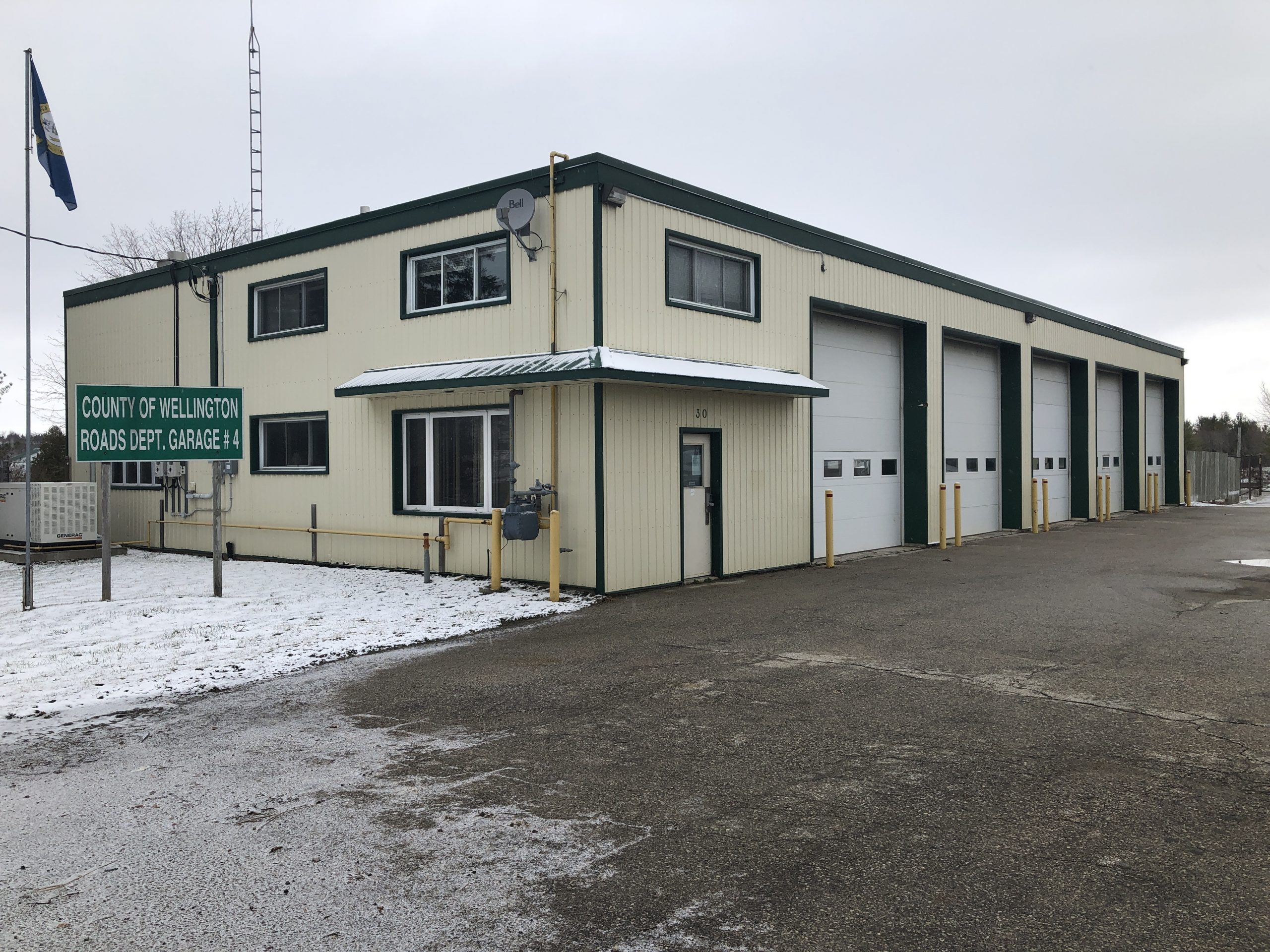 Garage re-purposed - Wellington County council agreed on March 25 to enter into a three-year lease agreement with the Guelph-Wellington Paramedic Service to use the former county public works garage in Drayton as a base for the Community Paramedicine Long-Term Care Project. Photo by Patrick Raftis

Wellington County council agreed on March 25 to enter into a three-year lease agreement with GWPS to use the former county public works garage in Drayton to house the project.

Council also directed that necessary renovations be completed “as soon as possible.”

The possibility of also making the garage, rather than the Drayton Fire Hall, the operation base for local ambulance service is also under consideration.

On March 22, the provincial Ministry of Long-Term Care announced GWPS would receive $6.1 million over four years to provide in-home care to seniors in Guelph and Wellington County.

The program leverages the skills and expertise of paramedics in collaboration with local health agencies to provide support to clients.

A report from GWPS Chief Stephen Dewar explains the project allows the service  to provide “accessible, responsive, proactive and safe evidenced-based care” to seniors in the City of Guelph and County of

Wellington while they await long-term care placement in their communities.”

“This program will make a difference to many seniors who need medical support while remaining in their homes,” stated Dewar in the report, which notes the service began a pilot project in December, utilizing one paramedic for 12 hours per day.

That pilot has been stationed in the Harriston fire hall as a temporary location, and was scheduled to end on March 31.

The new funding will expand the project to include two paramedics, 12 hours per day (with one generally scheduled to work in the county and the other in the City of Guelph area, depending on demand). It will also include one paramedic working through the night covering both areas. There is also some administrative and logistical support staffing included for the project.

In addition to providing the Community Paramedicine Long-Term Care services, “the paramedics involved in providing this service will be fully certified, experienced and equipped paramedics and will be able to respond to emergencies in the vicinity of their location as they travel through the County of Wellington,” Dewar explained in the report.

“These additional resources can be expected to assist in addressing the paramedic response times to the more remote areas of the county.”

The former county public works garage in Drayton requires about $100,000 worth of renovations in order to meet the needs of the paramedic service.

Under the proposals, the county will fund the renovations to the building, and lease the building to the City of Guelph for use by GWPS.

A report from county CAO Scott Wilson notes the lease payments of $75,000 per year will cover the renovation costs through a projected annual surplus of $63,000 to $69,000 to the county, which will also cover heating and hydro and miscellaneous costs.

“The chief’s report also contains reference to the limitations of their current location in the Drayton Fire Station,” stated Wilson.

“The 10-year plan projects the timing and cost of five new ambulance stations, with Drayton tentatively scheduled for 2026/27. In discussions with Chief Dewar, and on an interim basis, moving the regular ambulance service from the Drayton Fire Station to the Drayton garage has been considered, including construction of a classroom facility at an estimated cost of $100,000.”

Wilson added, “This option will require more analysis and clarification about the future of ambulance operation and governance, before it can be recommended for implementation.”

“I think we were talking $1.5 million for a new station in Drayton. If that could be accommodated in this existing facility for $100,000 or $200,000, I think we need to be moving forward with that,” said Campbell.

“So I fully support getting this process started with the new program and the added services … but I think that we should be looking at the total picture as well and having a further report coming back saying let’s move on to phase two of this, which would be moving on to relocating the physical parking, or stationing of the ambulance in Drayton.”

Wilson explained the proposal before council regarding the former works garage was “simply renovations to make it useable for the community paramedicine program.

“To completely renovate that facility to make it the centre for ambulance service in the north would certainly take more than a hundred thousand bucks. In our 10-year plan we’ve got I think $3 million for the ambulance centre and its proposed location is Arthur.”

Wilson noted the plan calls for $1.5 million for a Drayton ambulance station.

“I do believe it needs quite a bit more discussion and to completely renovate, redo the garage in Drayton to make it into the ambulance centre for the north. It would take more like the $3 million that we budgeted for,” Wilson added.

“I’m not looking at the full training centre in the north” being located in Drayton, Campbell clarified.

“If it just needs $100,000 to get the new program up and running I’m quite okay with that. I just don’t want this put on the back burner for another five years if there’s an opportunity to save the county money in the long-term by renovating and using this facility,” Campbell stated.

“I will support councillor Campbell’s suggestion that we do look at this as a bit deeper dive,” said councillor Gregg Davidson.

“If we can accommodate moving that ambulance over under that $100,000 that’s already been committed, then we should be doing that now, not later.”

Dewar told council the City of Guelph, which operates ambulance services for the county and the city, is currently in process of bringing in a consultant for a needs assessment on paramedic stations.

“That will give us an objective and professional description of what all is required and I think that will answer many of your questions,” said Dewar.

The current renovation proposal, Dewar added, “is obviously a need that’s come up right now based on the provincial funding.”

However, he noted moving the Drayton ambulance base to the garage facility could be “a really great interim step” until plans for a new Drayton station are finalized.

Councillor George Bridge noted that prior to the COVID-19 pandemic’s arrival last March, the province had been looking at changes to the way the ambulance system would operate in Ontario.

“Before this pandemic, it was pretty well written out there that there was going to be a major change,” said Bridge, noting the county has already done “an extensive study” on ambulance facilities in the county and “It’s still in our 10-year plan.

“I’m not really convinced that we have to change all our ambulance sites going forward if the ambulance service is going to change in (terms of) how they are going to be run by the province,” Bridge suggested.

Warden Kelly Linton stressed the county would not be moving forward “in any kind of piecemeal fashion.”

Linton stated council could move forward on the renovations needed for the community paramedicine project, while directing staff to, at the same time, look into options for moving the ambulance location into the same facility.

A motion to approve the agreement with GWPS for a three-year lease on the former county garage facility in Drayton was approved unopposed.