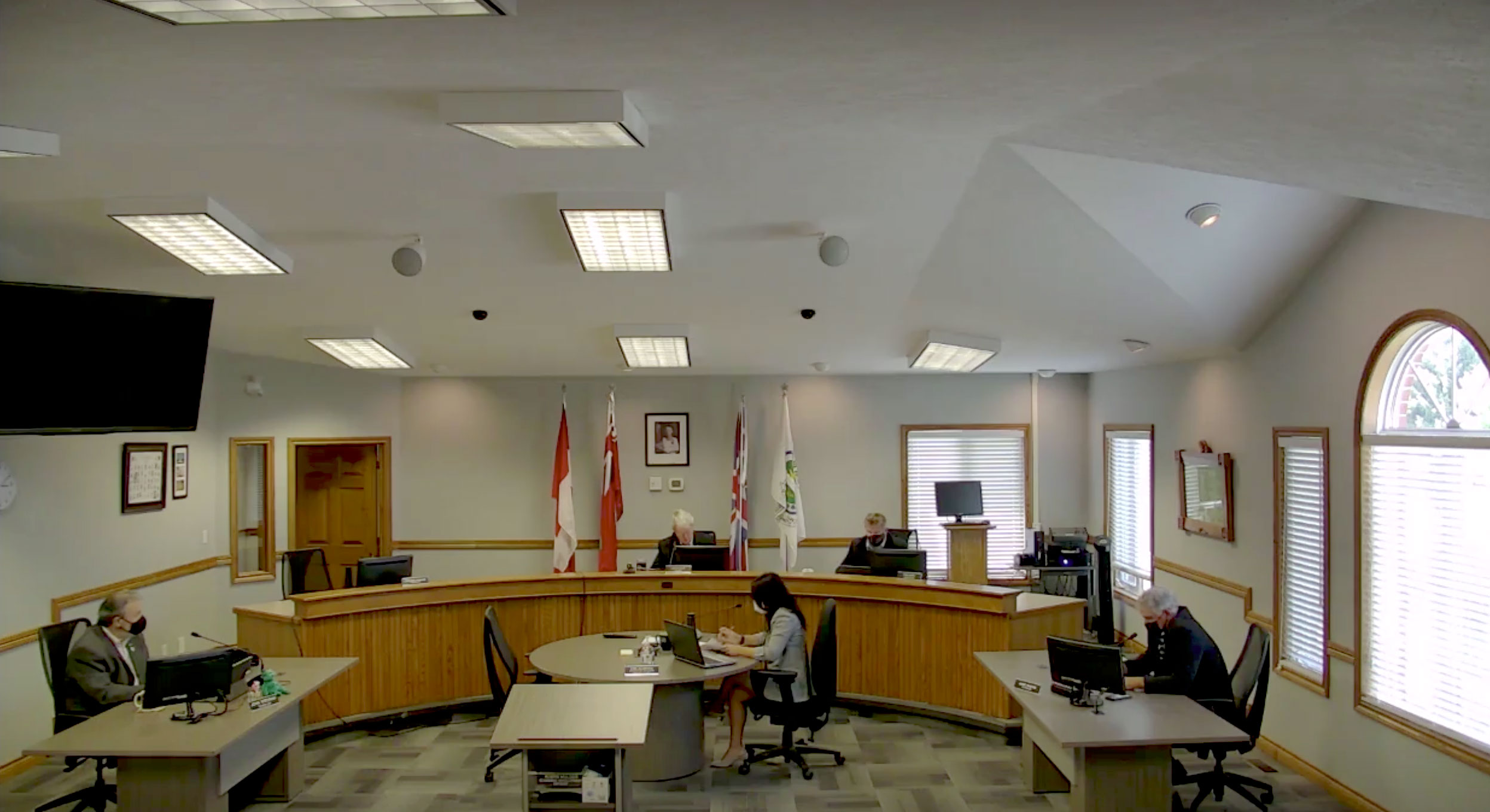 The Town of Erin has hit a speed bump in its wastewater treatment plant plans after receiving no bids on it's latest contract. Screen shot from Aug. 24 Erin Council meeting

ERIN – After no bids were received for the Erin wastewater treatment plant, council and staff are reviewing their options.

The controversial plant, which has generated a variety of objections from environmental organizations, has hit a speed bump in its operations.

In an Aug. 24 meeting, council received a report prepared by the town’s director of infrastructure services and engineer Nick Colucci, which noted that after two deadline extensions no bids were received for the project.

“It’s a key infrastructure project and we need to ensure the construction is done as per the approved environmental assessment,” Mayor Allan Alls said in an opening statement to council.

“I would like to ensure that this is done properly, and we dot all the I’s and cross all the t’s.”

The posting for tender was listed electronically on June 16 and was made available for three prequalified contractors, including Bennett Mechanical Installations, Kenaidan Contracting Ltd. and Maple Reinders Constructors Ltd.

After two extensions the final bid deadline was Aug. 19 at noon. As of the deadline, the three prequalified contractors did not submit bids.

“I mean the obvious question would be why, I guess that still has to be vetted out,” councillor Rob Smith said in response. “I personally myself find it highly unusual that three people would not bring anything back from a tender.”

Colucci said staff will be exploring its options with the three contractors to determine why they didn’t bid, adding an option would be to include more bidders and proceed with a new tender.

“Consultants and staff will come up with a plan going forward and we’ll reissue the tender,” he explained, adding “we do have the meetings set for later this week so early next week we’ll have a plan to go forward.” The tender will be reposted following the meetings.

He also noted the previous bid invitation received more than 500 questions on various technical details that town staff are currently in the process of answering.

“Subsequent to these meetings staff and the consulting team will determine the next steps to repost the tender revising the tender documents to incorporate the answers to the 524 questions received during the tender period,” Colucci wrote in a report to council.

In the Aug. 24 meeting, Colucci said the consultants weren’t surprised by the numbers of questions received, given the complex nature of the project.

“Bearing in mind that it’s not only a general contractor. They are reaching out to subcontractors to get their input, so the subcontractors are asking their questions and it’s getting funneled through there,” he explained.

The town has previously awarded design and engineering contracts for the plant to WSP Canada Group Ltd.

Council also announced during the meeting that the town has secured a total of $94,336,529 in funding, allowing council to proceed with construction of all four segments of the wastewater transportation infrastructure as well as a 75 per cent capacity wastewater treatment plant.

The total project cost is anticipated at $118 million, which includes the treatment plant and all associated infrastructure.

“This is a big win for the community. Staff has been working hard to secure these agreements that will help ease the burden, of the costs of building our wastewater treatment plant, on our taxpayers,” Alls detailed in a press release.

The agreements signed will allow for the construction of 4,120 single detached equivalents in Erin over the next 30 years.

As per the agreements, in addition to necessary updates to the amount of funding to reflect current cost estimates, contribution amounts will continue to be updated.

To maintain transparency all agreements are posted online at www.erin.ca under wastewater costs.