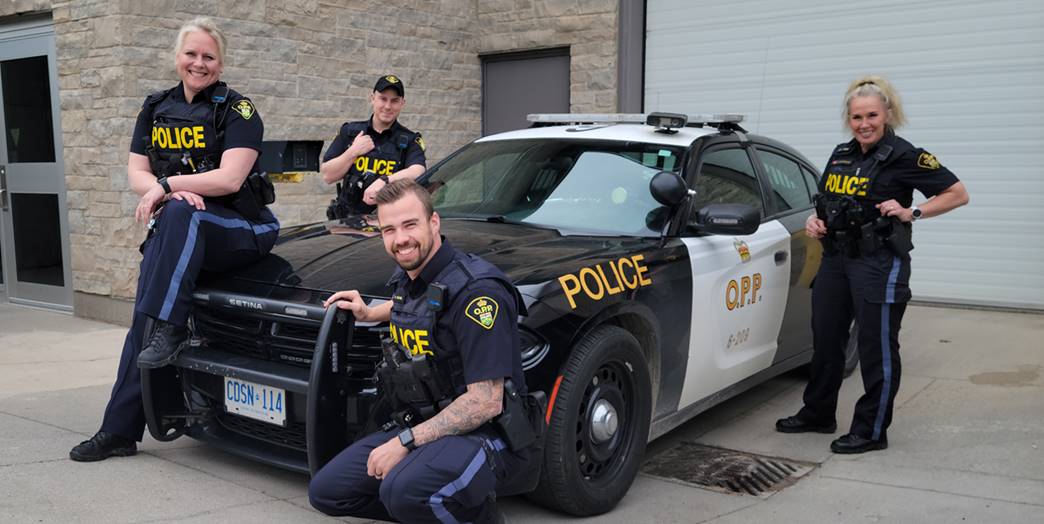 The concept of the Community Response Unit (CRU) was presented to the county’s Police Services Board last year and, with a rolling start, began officially in September.

Though the CRU has adopted an emphasis on community and youth engagement, its mandate is significantly broadened from a previously hyper-focused school mandate.

Since its inception, members have attended a grand opening of a youth hub in Palmerston, spent hundreds of hours responding to service calls and on foot patrols, executed 41 warrants, participated in “lock it or lose it” and RIDE campaigns, worked with the Alcohol and Gaming Commission of Ontario to investigate complaints, and assisted in monitoring small anti-lockdown and anti-vaccine gatherings in Fergus and Mapleton.

“There is lots of overlap in the unit,” said community safety and services sergeant Corrie Trewartha, who oversees the CRU as well as the IMPACT program, a remaining youth resource officer focusing on primary schools, and two media liaison positions.

Though CRU members are indiscernible from any other road officer, Trewartha said the unit allows for its staff to be assigned to events, such as the home and leisure show in Fergus this week, used for marketing and connecting with people outside of 911 calls or getting a ticket.

“They don’t have a common day-to-day experience with us,” Trewartha said of the public.

CRU members could change that dynamic and engage with people under more casual circumstances.

With an open door to UGDSB high school classrooms all but shut, police are attempting to connect with youth in other ways.

Referring to area schools and the Aboyne OPP operations centre, Trewartha said, “We don’t need their brick and mortar to engage our youth – we can do it right here in our own brick and mortar and be just as successful with it.”

One solution police are pursuing is the creation of a youth advisory council.

There will be an educational component to each of those meetings; half of them will be dictated by the youth,” Trewartha explained.

Chosen topics could range from cyber bullying to sexting. Police will then present to youth, tapping into partnerships with local organizations.

“It will be very interesting to see how this grows over the next few years and what they choose to engage in … what the priorities will be for certain students,” Trewartha said.

Touted as a way for youth to have their voices heard and impact the county, police are hoping the group will include at least two youth members, aged 14 to 20, from each of the county’s municipalities.

It’s early stages, but Trewartha said they would meet once per month, for two to three hours from October to June. Trewartha may not have all the answers to what the council will be – “they’ll be engaged in what that mandate looks like” – but she’s realistic about what it won’t be: a solution to challenges facing area youth.

“It’s [about] trying to equip them with all of these different tools and different abilities to communicate and educate,” said Trewartha, herself a mother.

“I’m never surprised by what I hear from the youth, and I think that oftentimes they can be given a very bad rap … I’ve certainly seen them when they become passionate about a topic or subject they are very articulate and very engaging, and so I expect to see some of that probably right out of the gate.”

An application period will open in summer, with chosen youth announced in September, followed by a first meeting in October.

Police hope the group appeals to kids wanting to have their voices heard.

With many modern families consisting of two working parents, engaging conversations with children are sidelined, resulting in youth not being heard, according to the sergeant.

Police are also hoping to attract youth who care about their community and have leadership potential.

Youth members will get to plan an event for the following May, with some free reign on intentions and what type of event to plan.