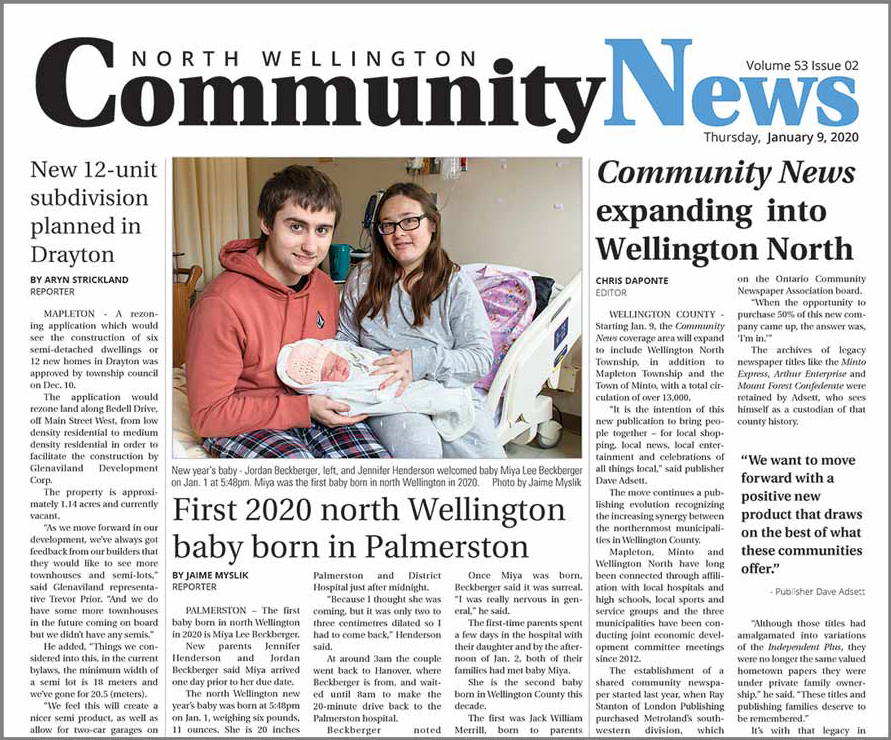 WELLINGTON COUNTY – Starting Jan. 9, the Community News coverage area will expand to include Wellington North Township, in addition to Mapleton Township and the Town of Minto, with a total circulation of over 13,000.

“It is the intention of this new publication to bring people together – for local shopping, local news, local entertainment and celebrations of all things local,” said publisher Dave Adsett.

The move continues a publishing evolution recognizing the increasing synergy between the northernmost municipalities in Wellington County.

Mapleton, Minto and Wellington North have long been connected through affiliation with local hospitals and high schools, local sports and service groups and the three municipalities have been conducting joint economic development committee meetings since 2012.

“Clearly I’m bullish on print and strongly believe in the importance of newspapers,” said Adsett, who served with Stanton for years on the Ontario Community Newspaper Association board.

“When the opportunity to purchase 50% of this new company came up, the answer was, ‘I’m in.’”

The archives of legacy newspaper titles like the Minto Express, Arthur Enterprise and Mount Forest Confederate were retained by Adsett, who sees himself as a custodian of that county history.

“Although those titles had amalgamated into variations of the Independent Plus, they were no longer the same valued hometown papers they were under private family ownership,” he said. “These titles and publishing families deserve to be remembered.”

It’s with that legacy in mind that Adsett decided to establish the North Wellington Community News.

“As we remember that past, we want to move forward with a positive new product that draws on the best of what these communities offer,” he said.

As part of the above changes, the Independent Plus will no longer be circulated in Wellington County.