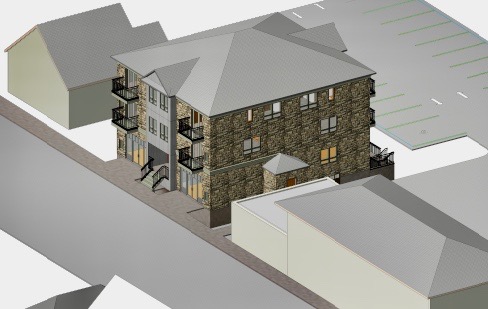 Centre Wellington's committee of adjustment has approved a minor variance for the first phase of a residential development on Moir Street in Elora. (Committee agenda image)

ELORA – Centre Wellington’s committee of adjustment has approved a minor variance application to allow street-level units of a proposed stacked townhouse building in Elora to be built as either commercial or residential units depending on market demands.

The upper units will be residential.

The lot in question, 27 Moir Streeet, is on the northern boundary of Elora’s Central Business District (CBD) and according to Centre Wellington’s official plan, only commercial units are allowed at street level within the CBD.

At the April 15 committee of adjustment meeting Pierre Chauvin, agent for the applicant, said Elora needs more attainable housing and this building will offer rental units and not condos.

And post-pandemic, the need for commercial space may not be as great as for housing, he added.

“We are not proposing to remove any commercial use. We are simply adding residential use should the market demand it,” Chauvin said.

The north side of Moir Street is low-rise residential in the transitional zone between the CBD and the residential area to the north.

“This (proposal, with residential or commercial space at street level) is more transitional than having intensive commercial,” Chauvin said.

The property does not front onto Geddes Street, which he agreed should have commercial units at street level.

The staff report recommended approving the variance as it complies with the rule and intent of both the township and Wellington County official plans regarding attainable housing and urban intensification and it also complies with the provincial growth plan.

The application has caused a stir in the community and the committee received 22 letters opposed to the application, though no delegations appeared at the meeting.

The same builder, who owns the entire block at the southeast corner of Geddes and Moir streets, plans to eventually build a six-storey block of stacked townhouses with commercial use at street level on Geddes Street.

Most of the correspondence had to do with that proposal, which was not in front of the committee.

People are opposed to the height and size of Phase 2 as well as the lack of consultation with Centre Wellington Heritage and the public.

Many say the development would tower over the surrounding streetscape.

“I wasn’t clear, I guess, in this application,” Chauvin said when asked about the strong community response.

He said he included a “ghost drawing” of the entire project in the Phase 1 application, “and I think people just saw the six-storey building.”

Chauvin said there will be public meetings on Phase 2 when he begins the application process for that project, which could come in the next couple of months.

“I’m happy to be engaged in this dialogue. We have nothing to hide and look forward to the debate and discussion when the application comes forward,” he said.

Bob Jackson, a local resident who wrote in opposition to the variance, feels the change is more than minor and should have required a change to the official plan.

“I was surprised to hear some committee members refer the proposed three-storey intensification project as being attainable housing,” he told the Advertiser in an email after the meeting.

“I did not notice any evidence in the agenda materials disclosed to the public which establish that the proposed three-storey intensification project could be classified as attainable housing.

“Indeed, the township’s healthy growth committee has yet to define the meaning of attainable housing in Centre Wellington.”

The applicant used the term “flex space” in its application and Jackson pointed out that phrase is not defined in planning language.

So the committee removed the term as it approved the minor variance, stating instead that residential and commercial units would be permitted at street level for the project.

“I love the flexibility approach,” committee member Aaron McCrimmon-Jones said. “We have no idea what commercial space demand will be.”

“I agree,” said committee chair Brad Dufour. “It’s good use of space and will benefit the community.”

There is a 20-day appeal period and then the builder can begin the site plan application.