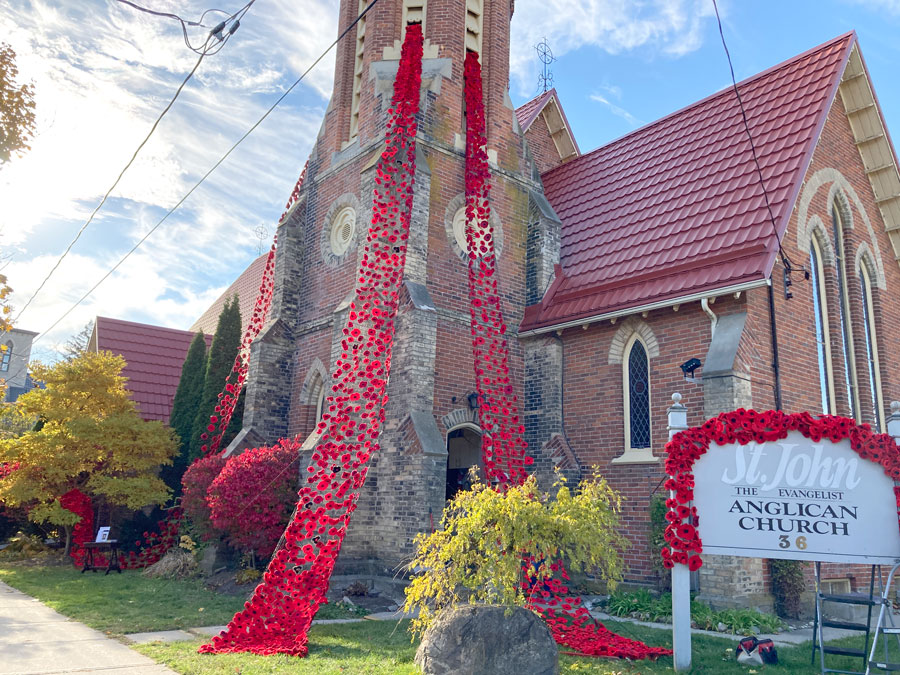 St. John Anglican Church in Elora has been decorated with poppy banners through a project run by local church members. Banners containing more than 10,000 hand knitted or crocheted poppies have been hung on the church and other locations around town. Photo by Pam Gradwell

The project began at the Elora church in 2021 to commemorate the 100th anniversary of the adoption of the poppy as symbol of Remembrance.

Last year about 100 people participated in creating banners made of more than 7,000 hand-knitted or crocheted poppies to hang on the church for Remembrance Day.

This year the project has expanded, with an additional 3,000 poppies, and banners have been hung on the local library, several businesses and other locations around town.

When the project first began, church members were holding meetings via Zoom due to the COVID-19 pandemic.

“That was very difficult for us to do because there was no human contact,” notes church member Barbara Dunsmore.

Church Rector Paul Walker had a friend in Cambridge where they were doing a similar project with poppies, Dunsmore explained.

“He started talking about these poppies and we thought … ‘How difficult can it be to knit or crochet a few poppies?’ We had set a goal of 1,500. That turned into 7,000. So, from there, it just expanded.” 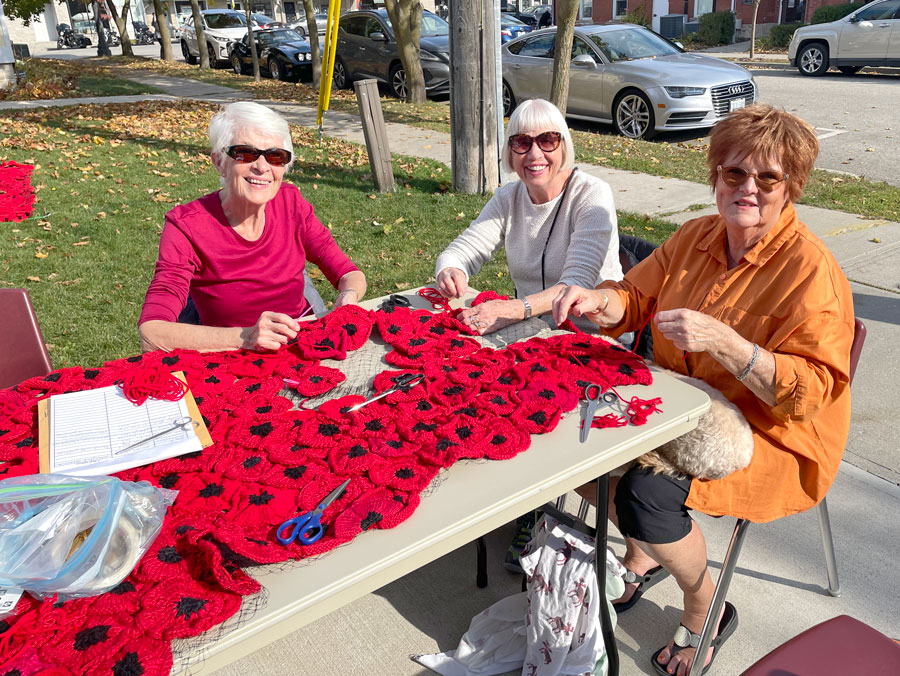 “People that had knit poppies at home, or crocheted them, were able then to come into the church … and start mounting them. So it was like a very joyous reunion … it was what everybody needed at that time for sure,” she stated.

In addition to local residents, people have come from considerable distances to see the display.

“We’re thrilled to have it done up this way. And it has become a real sort of pilgrimage site for people to visit and engage with some act of remembrance and peace,” said Walker.

In some cases, the poppies also came from beyond local borders and, in one case, well beyond.

Dunsmore said a local resident dropped off a box of poppies made by her daughter, who lives in Australia.

“She had read about it in the Wellington Advertiser – she reads it online – she decided that she would submit some poppies so she then mailed them to her mother and her mother dropped them off. She had grown up in Elora,” Dunsmore notes.

In addition to honouring war veterans, the 2022 banners also contain a special recognition of the passing of Queen Elizabeth II earlier this year.

“Someone had knit a black poppy with a red center just after the Queen died and I looked at it and I thought ‘What if we were to put those on the banners, just for this year, just in remembrance of the Queen dying,” she explained.

“We’ll keep creating poppy banners as long as people are interested in doing so,” she said.

“We’re very blessed to have this … it’s a little miracle for us, it really is,” she added.