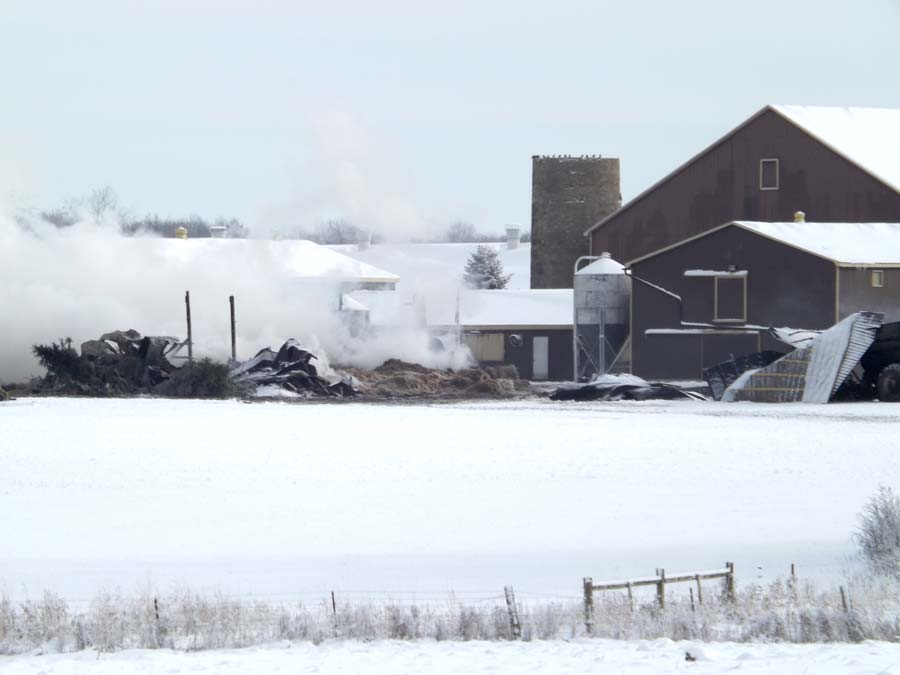 Farm fire - About 10 cattle perished and an implement shed was destroyed in a large fire on Nov. 12 in Mapleton.
Photo by Patrick Raftis

MAPLETON – A local farmer is “devastated” after about 10 cattle perished and an implement shed was destroyed in a large fire here last week.

But it appears things could have been much worse.

Mapleton Fire Chief Rick Richardson said firefighters were called just after 8pm on Nov. 12 to the blaze on the 8th Line between Sideroads 16 and 17, near Drayton.

Richardson told the Community News he could see large flames from about a mile away from the property, so he called for help from the Minto department.

About 30 firefighters from Mapleton and 20 from Minto’s Palmerston station responded.

An implement shed containing “quite a bit of equipment” and large bales of hay was fully engulfed by flames when firefighters arrived.

“There was no saving any of that,” Richardson said.

The concern, he noted, was several barns immediately adjacent to the shed.

“The shed is attached to a beef barn (that’s) attached to a poultry barn,” explained Richardson. “[The fire] was starting to spread into the beef barn.”

He said the owner, initially alerted to the blaze by a passerby, managed to free about 60 of the 70 cattle contained in the barn. They were later transported to other farms.

About 10 cattle perished, Richardson said the day after the fire, stressing that is an early “rough estimate.”

He added the fire is not considered suspicious, and his best guess is it started as a result of a combination of electrical failure and combustible materials.

A damage estimate was not immediately available, but the implement shed and all its contents are a complete loss, and about half of the beef barn was severely damaged.

“Of course, they’re devastated with the loss,” Richardson said of the property owners. “They’re upset, but also very appreciative of the efforts of Mapleton and Minto  firefighters … we saved a ton of buildings there.”

Richardson said there were no injuries related to the blaze and firefighters left the scene at about 5am.