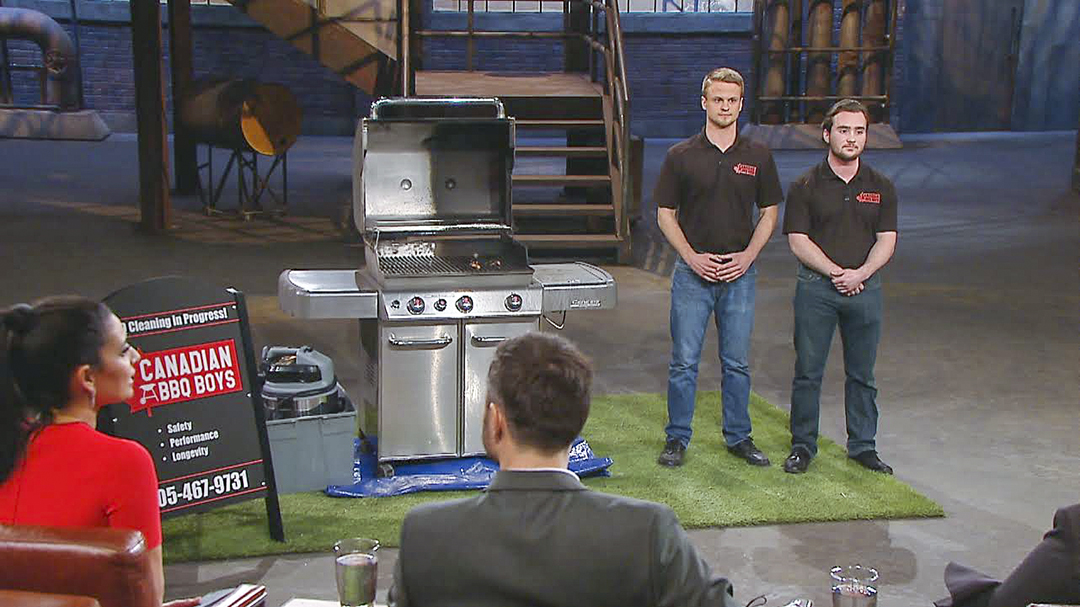 It’s a deal - Matt McCoy, left, and Michael Sutton, co-owners of Canadian BBQ Boys made a deal with Jim Treliving on the Jan. 10 episode of CBC’s Dragon’s Den. Submitted photo

GUELPH – Two University of Guelph students are taking on dirty barbecues throughout Ontario.

Matt McCoy and Michael Sutton started Canadian BBQ Boys the summer between their first and second year of university.

They are now in the fourth year of a bachelor of commerce degree, taking both business and marketing courses.

“We wanted to start a business and actually … Mike’s parents had had an experience with a general contractor who came out to (clean) the barbecue and he came back several times and it was just very inefficient, very high cost,” McCoy said.

“We love barbecuing; we wanted to start a business and the pieces just fell into place.”

The summer after their first year at U of G they started knocking on doors to offer their barbecue cleaning service.

“We finished the exams on the Friday and that Sunday we started knocking on doors,” McCoy said. “We got four sales our first day so it filled up our next day.

“Actually our very first door we knocked on we got a sale on that one; our very first door-to-door sales pitch ever. It’s a very funny pitch to say the least, but it took us a couple hours to build up the courage to even knock on the door.”

McCoy and Sutton spent mornings that summer cleaning barbecues they booked the previous day; afternoons were spent knocking on doors to book appointments.

“It could be 9pm and we wouldn’t stop knocking until we had the next day full,” McCoy said.

Sutton said the pair hadn’t really cleaned barbecues before and some family and friends doubted the business would work.

“They just really doubted us, but we didn’t really doubt ourselves; we were like, ‘Whatever, we’ll just try it, we’ll see how it goes,’” Sutton said.

Now the owners employ regional managers across the province who manage cleanings in specific geographic areas. McCoy and Sutton are still responsible for booking the jobs, but they didn’t do much hands-on cleaning last summer.

They made a deal with Jim Treliving, owner of the Boston Pizza franchise, for $50,000 for 10% of their company – exactly what they were seeking.

“I think we came in with a pretty realistic valuation and a lot of people don’t do that, but since we’ve both watched the show a lot we knew if we go in with a million dollar valuation we’re just going to get chewed apart and not get a deal,” Sutton said.

“So we came in realistic with something that we actually think we’re worth, then it’s going to work out for us.”

Now the Canadian BBQ Boys are going through the extensive due diligence process with Treliving’s staff.

“We haven’t received an investment yet,” McCoy said.  “We have been reached out (to) by other investors and things like that.

“We’ve had several contacts with the managers in his office, so there’s no deal yet, but we’re still open to investment and we’re still kind of looking around, seeing what we can do and how we want to take the business forward.”

The Canadian BBQ Boys will be out in full force this summer and McCoy and Sutton plan to continue with the business once they graduate from their fifth year of university.

The main message they want to share is that every barbecue needs to be cleaned.

“Our biggest goal is to spread awareness about the fact that you need to keep your barbecue clean and once enough people understand the importance of it we feel like it would be a great benefit,” McCoy said.

For more information visit https://canadianbbqboys.com. For a feature story check out the spring edition of Business Leader magazine.