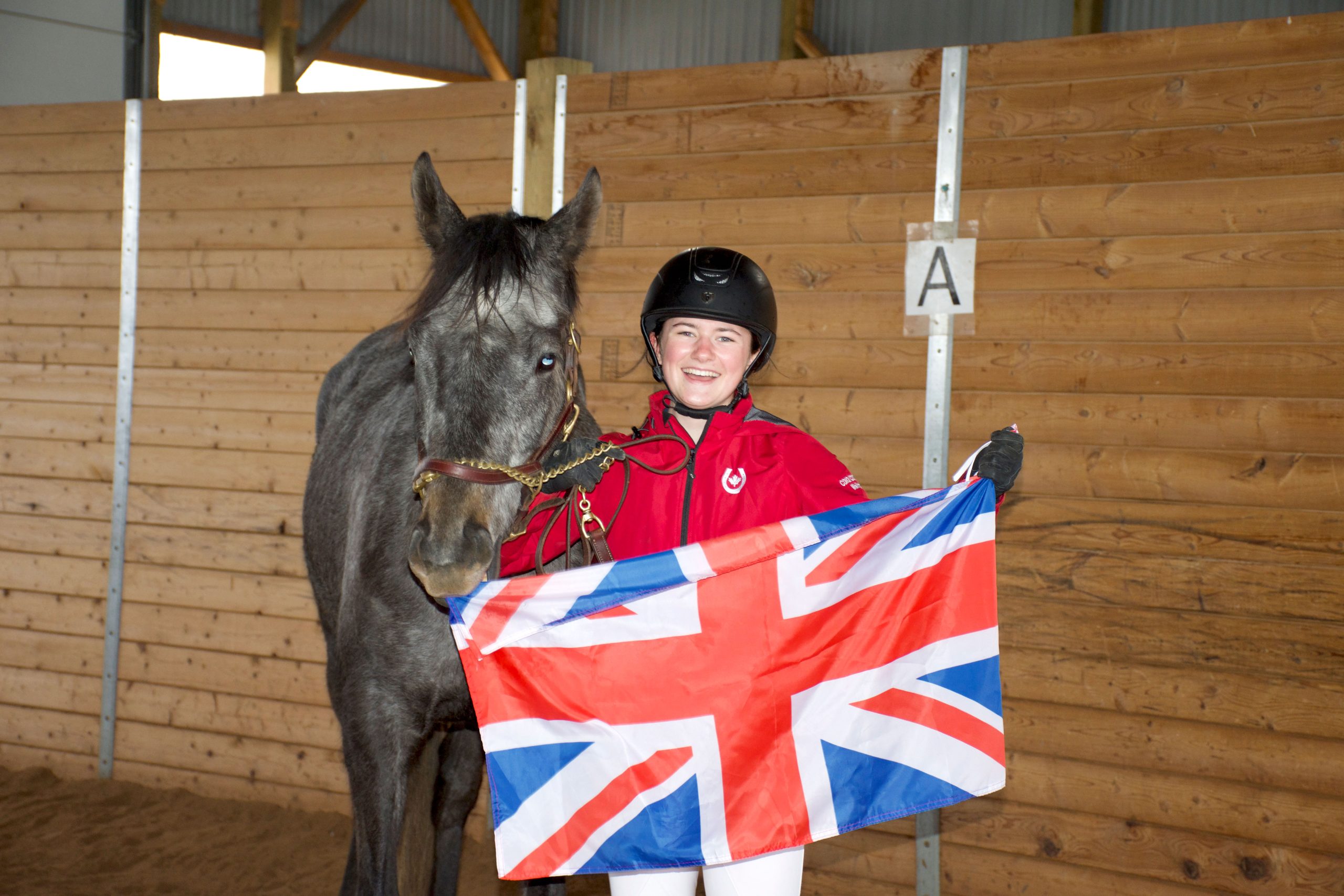 GUELPH/ERAMOSA – Set to saddle up and cross the pond, Avery Caine will be representing the Canadian Warmblood International Young Breeders team in the Netherlands this summer.

The 17-year-old Guelph/Eramosa resident has spent nearly her whole life riding and working with horses.

“Since as soon as I could walk my mom got me on a pony,” Caine explained.

“And I’ve definitely worked my way up through lots of challenging horses.”

Her parents, who also grew up riding horses, created CJ Equestrian in 2003. As a family business, Caine said she’s been fully immersed in the equine lifestyle.

“It’s been really cool to have this opportunity at my fingertips,” she said.

“It’s definitely expensive. And that’s why it’s been really nice to be able to have so much access to all this.”

Caine is currently in the process of retraining Calypso, a three-year-old off-track thoroughbred and the horse she’s hoping to bring to England with her in the fall.

Having purchased Calypso in December, Caine said she was looking to get her more experience, which is when she came across an Equi-tots clinic.

The clinic, geared towards young horses, offered practice for inspections, which includes jogging and presenting the horse.

Caine said her interest in the clinic grew and when she came across a notice that the Canadian Warmblood Horse Breeders Association was looking for members for the Young Breeders team, she applied.

“I had to take videos of myself jogging the horses in the triangle jog, and practice presenting them,” she explained.  “You have to have them standing a certain way and holding yourself a certain way.”

Growing up working with horses, Caine said she and her mom are always looking at how they can improve the horse’s performance.

“It’s definitely helped having her be there,” Caine said. “It didn’t seem like this scary daunting thing trying to judge this horse. It was like, ‘Oh I’ve done this before.’”

The young rider will be representing the Young Breeders team along with three other juniors and two senior members. The competition will be held the second weekend of July.

Currently, she is looking for sponsors and donations to help cover flight costs.

Hoping to pursue a career doing what she loves, Caine is also heading off to England this fall, where she will attend Hartpury University.

Caine said she knew from a young age that she wanted to attend university at Hartpury.

It was around the age of 10, she explained, at the Royal Winter Fair, that she came across a booth for the university.

“I saw the pictures and I just suddenly fell in love with it,” Caine explained. “I was just so in awe over the wide variety of equine courses they have.

“[They’re] nothing compared to the ones in Canada, like it’s very slim pickings over here … whereas over there, the industry is so much bigger.”

Now, nearly seven years later, Caine has accepted her offer into the equine performance and rehabilitation program at the university.

The program looks at rehabilitation as well as the biomechanics of the horse and rider, looking at how the rider’s movements and how it impacts the performance of the horse, she explained.

“I’d like to come back and open my own rehab centre after I’m done university and help take over the business one day,” Caine said, noting she’d also like to continue coaching and training/breeding horses.

As a rider, she also hopes to make it to an international competition and represent Canada at the Olympics.

“I know that I want to work with horses for the rest of my life, that’s an easy no-brainer to me,” she explained.

And there are so many different routes to take in the industry, she added.

“There’s so many different possibilities I can take and connections I can make,” she said. “Do I know where I’m going to end up in the future? Not really, but I know this is where I’m starting.”

Since accepting her offer, Caine said she’s visited and toured the university, and seeing it in person only reassured her that she’s heading in the right direction.

“It’s also terrifying though, that it’s happening now,” she said. “I’ve dreamed of this for so long and then finally, it’s now happening, which is scary.

“There’s been a lot of ups and downs throughout the way,” she added. “I know I’ve always wanted to work with horses, and but I never knew if I was going to be actually able to get myself to go to England.”

Building their own language

When it comes to anything to do with horses, Caine said it’s her mom, Lyssa, that she looks up to the most.

“She is an incredible horsewoman; I have never met anyone who can do what she can with horses and riders,” she said. “It has been an honour to be able to work beside her all these years.”

Asked what it is she enjoys so much about working with horses, Caine said she loves developing her own languages with them and the rewarding feeling that comes from working with a horse.

“I love that you can’t communicate necessarily with words, and so it’s finding that other way to communicate with it,” she explained.

“The partnerships that I’ve made with horses are incredible,” she added. “You never know what you’re going to get into that day … but I think that’s the exciting part.