Naloxone - The Upper Grand District School Board is considering the implementation of naloxone in schools. A report will come to the board of trustees for consideration in December.
Photo by Jaime Myslik

GUELPH – In light of the ongoing nationwide opioid crisis, the Upper Grand District School Board (UGDSB) is considering the implementation of naloxone kits in schools, similar to first aid kits and defibrillators.

At the June UGDSB meeting four delegations asked trustees to make the kits available in schools.

Naloxone can temporarily reverse the effects of an opioid overdose and provide valuable time for the person to receive treatment.

Opioids include drugs like heroin, morphine, fentanyl, methadone and codeine. In Canada, 11,500 people have died from opioid overdoses in the last three years.

Ian Digby, chief of emergency medicine at Guelph General Hospital, said that in 2003 there were about 45 deaths due to opioid overdoses in Wellington County.

That number has now risen to about 170 deaths.

One of the delegations at the UGDSB meeting was Adrienne Crowder of the Wellington Guelph Drug Strategy.

“We’re hoping that in a preventative way the school board would consider bringing naloxone on site in the schools to prevent opioid overdose,” she said.

Crowder explained opioids are beneficial for short-term pain management, but, “They’re quite addictive and in a short period of time people can become quite dependent on them.”

If too much is taken, opioids can shut off the part of the brain responsible for breathing, which could lead to brain damage or death, Crowder said.

Naloxone will temporarily help an affected person breath again but it is not long lasting and they could slip back into an overdose if they don’t receive treatment.

The school environment is a concern because a recent Wellington-Dufferin-Guelph Public Health (WDGPH)  youth survey from 2017-18, revealed 18 per cent of students in both Grade 7 and Grade 10 used non-prescription pain pills within the past year.

“If students are using non-prescription opioids recreationally then we also know that staff, custodians, administrators, guests, contractors, random people on the school grounds are also possibly having an experience if they have an opioid addiction and the risk of something happening is really considerably high,” Crowder said.

However, Dr. Matthew Tenenbaum, associate medical officer of health with WDGPH, said no overdoses have been reported in a school setting within the health unit’s coverage area.

“We haven’t actually seen overdoses happening there and so, while [naloxone] would help if there was [an overdose], it’s not an area that we consider high risk for an overdose.

“That’s why we’re not pushing very hard for there to be naloxone kits in the school setting.”

Wellington OPP Inspector Scott Lawson said he’s not supportive of naloxone kits in schools until policies and procedures are in place.

“You can’t just hang a naloxone kit on the belt of a police officer and not have some training and some idea about cause and effect and things that would come from the deployment of that and symptoms and (the) Good Samaritan Act and all sorts of the parts and pieces to it,” Lawson explained.

“So the school board would be no different. They would need to have all that figured out before they decided to roll this out.”

Lawson also indicated having naloxone in schools may have different outcomes in different areas of the board.

“Because I’ll tell you, it might look different in rural Wellington than it does in the City of Guelph even though it’s the same school board,” he said.

Board trustees expressed concerns about the cost to the board and how to identify when naloxone kits should be used.

Crowder said on average a kit costs $120 but if board staff is trained through the Sanguen Health Centre in Guelph, the naloxone kits would be provided for free.

However, UGDSB superintendent Gary Slater said there are two other options for training: a half-day opioid specific training or a full day  of first aid training that includes opioid training.  Slater said the cost per naloxone kit would be $92 with those two options and the kits would need to be replaced about every two years.

Digby, who spoke as a private citizen at the board meeting, said that when someone is found unconscious the resuscitation process should begin and 911 should be called before anything else is done.

“If there is evidence around the individual of a possible opioid overdose you give naloxone,” Digby said.

“And if the individual has not had an opioid overdose you will cause no harm, but you will already be doing CPR and 911 will have been called. So you’re doing your due diligence.”

He noted a number of conditions can mimic the symptoms of an opioid overdose, like seizure or cardiac arrest. However, even if naloxone is administered to someone who is not in overdose, there will be no negative consequences, he said.

“I would encourage you, after you have appropriate deliberations, to seriously consider getting these tools into your schools and making them available to your students and to everyone who is there,” Digby said.

Slater said Dufferin paramedics are in favour of naloxone kits in schools but for Wellington Guelph Paramedic Service, he said “their official position was not to have kits in schools.”

However, Stephen Dewar, chief and general manager of Wellington Guelph Paramedic Service, said he has not specifically been asked for an opinion on naloxone kits in schools.

“Where we have been asked about naloxone, we attempt to echo the advice given by Wellington-Dufferin-Guelph Public Health and our medical officer of health,” Dewar said.

“That advice suggests that known opioid users and their close contacts should have naloxone kits available to them.

“Placing naloxone kits in areas that are publicly available (similar to fire extinguishers and public access defibrillators) is not recommended as the users would not be expected to have any training or knowledge of the appropriate use and risks of administering naloxone.”

Dewar added rescue breathing is effective to support someone having an overdose until paramedics arrive. 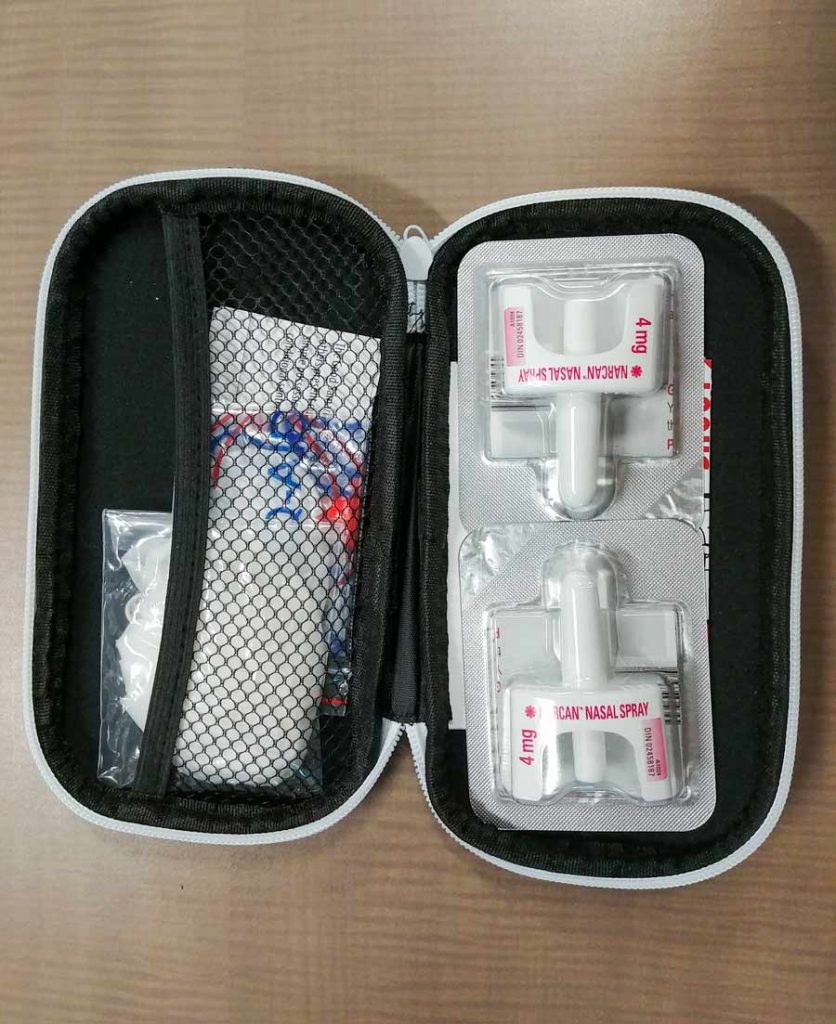 Naloxone – The Upper Grand District School Board is considering the implementation of naloxone in schools. A report will come to the board of trustees for consideration in December.
Photo by Jaime Myslik

Lawson said it is imperative that the school board consider tiered response in the different areas of the township.

“If a volunteer firefighter from ‘x’ municipality is going to respond to one of the high schools in the County of Wellington then the firefighters need to be aware of what the expectations would be if the school board were to [approve naloxone kits or not],” Lawson explained.

He added it’s not as simple as putting the naloxone kit in the school and using it if needed – there’s also post-deployment to consider.

“It’s traumatic and if I’m a school teacher or a student and I do it and it doesn’t turn out, they have to have a plan for that,” Lawson said.

He noted that when people who are in a position of authority, like a teacher, deploy naloxone, it “changes everything.”

“That’s why they’re rightfully doing the right things and why it’s not as easy as just putting it in the school and saying, ‘Look at that, we’ll save a student if it happens,’” he said.

On June 25, trustees directed staff to prepare a Drug and Alcohol Overdose Protocol that includes the recommendation on implementing naloxone in schools.

That report will be brought back to the board before December.