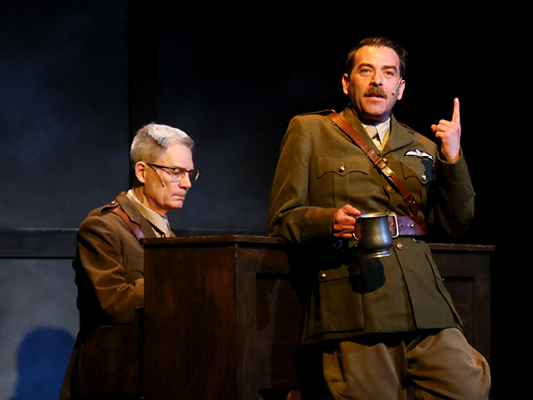 ST. JACOBS – Though only two performers, one of them primarily a piano player, take the stage for Drayton Entertainments’ production of Billy Bishop Goes to War, this show is no ordinary monologue.

In the course of relating the riveting tale of Canadian First World War flying ace Billy Bishop, veteran actor Jacob James takes on the roles of numerous rich characters the legendary pilot encounters on his journey from military college to the front lines.

James does this without costume changes and little in the way of props. He pulls it off with a bevy of accents and adjustments in tone and body language, as he becomes, in turn, a war office bureaucrat, an elderly British Dutchess, her boisterous butler, a French femme fatale and others.

The effect is that of a skilled barroom storyteller, sharing his latest escapades in a fashion that holds listeners enthralled as he pitches from comic quips to deep drama. It’s an amazing performance from an actor tasked also with pulling almost the entire line load of a 90-plus minute show.

Joining James on stage for the production, billed as a “musical memoir,” is Jim Hodgkinson, serving double duty as the show’s music director while portraying the piano player and narrator.

James and Hodgkinson share singing duties on a series of tunes with a wartime feel and the musical selections set the stage nicely for various scenes.

Director Max Reimer crafts a show that keeps the story moving quickly and helps the audience focus on the remarkable tale of Billy Bishop.

People with only a passing familiarity of the history (mea culpa) will be surprised to learn of Bishop’s roundabout route to military renown.

After an essentially disastrous turn at the Royal Military Academy, he enlists for active service before the administration manages to expel him and he finds himself literally serving in the trenches before managing to talk his way into the air force as a means to get out the mud.

After a shaky start he finds his wings and earns his place in history among the top fighter pilots of his era.

While the play is packed with engaging scenes, it is when James takes us with him into the skies for a climactic dog fight that the show truly soars. The audience sat rapt as “Bishop” described the action around his daring lone wolf raid on a German airfield that ended with … well that would be telling.

The set for this show, designed by Brian Dudkiewicz, aids in the immersive experience. The drab airplane hanger feels like an extension of the intimate schoolhouse theatre where the production is staged, and lighting by Lyle Franklin transforms it into other locations as needed.

The work of costume coordinator Nicole Del Cul also helps bring an authentic feel to the production, which brought the opening night audience to its feet for a spontaneous standing ovation.

Regular performance tickets are $53 for adults, $32 for youth under 20 years of age and $43 for groups of 20 or more and select discount dates. HST is applicable to all ticket prices.