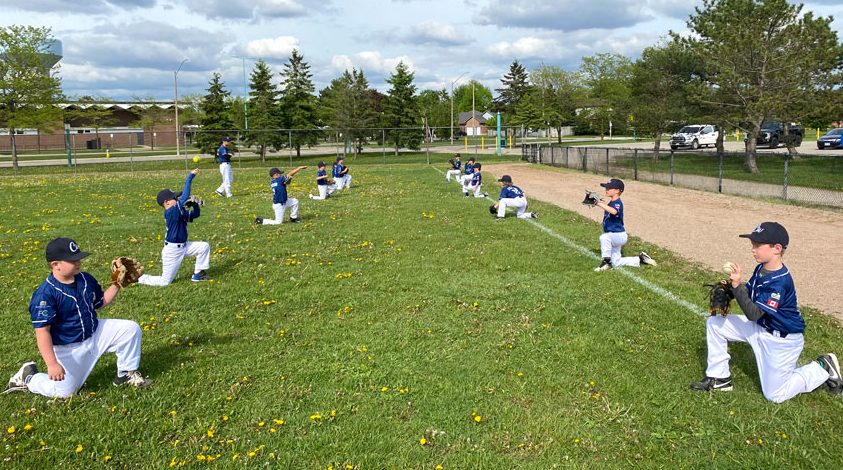 CENTRE WELLINGTON – After a long drought, Jeremy Draper wants people to know that baseball is back in Centre Wellington.

Draper is president of Centre Wellington Minor Baseball and head coach of the league’s sole team: the CW Eagles Under 10 (10U) rep team.

But he’s hoping that once parents realize baseball is back, they’ll want to register their kids and perhaps volunteer with the league as well.

The dearth of baseball in the township is not the result of the pandemic.

“There hasn’t been baseball in Centre Wellington for five or seven years although there have been teams in the past 10 or 15 years,” Draper said in an interview.

But that’s a big area that includes Mitchell, Flesherton, Mount Forest and Listowel and most of the games have been pretty far from the township.

“That’s what’s been happening – the league will start up, but they only last a year or two. Parents get fed up with all the driving,” Draper said.

Draper applied to join the Inter County Baseball Association (ICBA) that includes Guelph, Kitchener and Cambridge – much closer for games – but the application was narrowly denied this year.

But while still officially part of WOBA, Draper negotiated a hybrid model for the team this year. His team will play seven games for WOBA, but only against Listowel and Mount Forest.

And while not officially part of ICBA, the association is allowing the Centre Wellington team to play 24 games with them this season.

Draper said he’ll apply again next year to join ICBA and hopefully will be accepted.

Already four games into the 2022 season, Draper said it’s likely too late to get another team together for this season regardless of which association Centre Wellington joins.

But it’s the perfect time to begin the work and Draper is hoping one or two or more adults will step forward and donate their time and expertise.

The 10U team is brand new, “but if there’s interest in a different age group, reach out. I can help with the paperwork and start a new baseball program,” Draper said.

“The hardest part is knowing what to do. Now I’ve done the legwork.”

Teams typically tryout in the fall for the following year. Draper said his under 10s worked on skills over the winter as it’s been a long pandemic and they needed to brush up.

“This is a start,” Draper said.

“But this is also a growing community. There’s no reason we can’t have teams at every level. Going with Inter County, parents might enjoy it more.

“The kids are ecstatic to be out there again. They are having a blast with it,” he said.

Cost per player is around  $500 but Draper said sponsors and fundraisers will bring that cost down.

Most of the fee goes to cover rent and umpires (the league is also looking for umpires for this season who receive a stipend per game).

Anyone interested in learning more about Centre Wellington Minor Baseball can email Draper at cwrepbaseball@gmail.com.