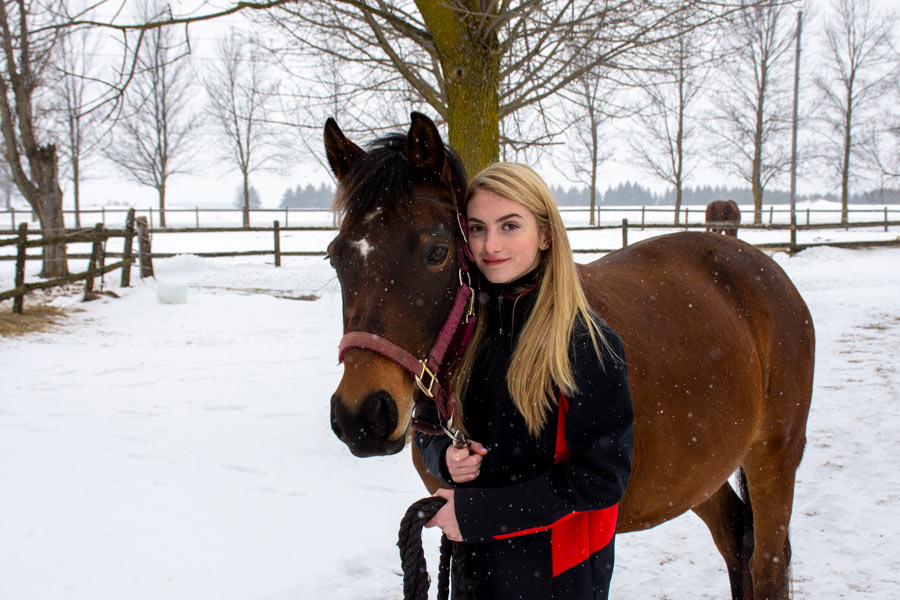 Actress - Madison Brydges of Arthur has already had a successful acting career in her 15 years. Here she is with her horse Scarlett at Travis Hall Equestrian Centre in Centre Wellington.
Photo by Jaime Myslik

CENTRE WELLINGTON – An Arthur teen is making a name for herself in the acting industry.

Madison Brydges, 15, has already appeared in high profile films and TV shows, including Flatliners and Big Top Academy. This year, her latest project, Grand Army, will be released on Netflix.

The teen began acting when she was just six years old.

“Plus because I was just so busy and I always wanted to do something different or something new, and then I tried acting and funny enough the first job I ever got was a Polly Pocket commercial and that was so much fun.”

From there she landed a short film and a few other commercials.

“I did many auditions because I actually loved the entire experience of being on camera, getting all my makeup done; I got so excited,” Brydges said.

And then she got the role of Tessa on Flatliners. Released in 2017, the science fiction psychological horror film follows five medical students who attempt experiments that produce near-death experiences.

She got to “meet all those amazing people like Ellen Page, Nina Dobrev, Michael Douglas (producer), all those people were really, really, influential at that point,” Brydges said. “So definitely that was a huge step up.”

From there she landed a spot on Big Top Academy, a series about an extraordinary group of youth at a circus boarding school. The audition process took about two years.

After she first auditioned she was told there wasn’t enough budget to continue. Then, the show called back a couple months later and she completed more auditions, only to be brought to Toronto, where she learned some circus tricks and lines and then she was told once again that the show wasn’t happening.

A couple months later, Big Top Academy was back and Brydges was one of 30 people the producers chose to audition, from over 10,000 options.

So, Brydges travelled to Montreal for a final audition where show officials chose the final eight actors.

“They did the same thing,” Brydges said. “Made us all do circus tricks, taught us all these things, made us do scenes.”

At this point the actors knew which parts they were auditioning for.

“All of these kids, I am not even kidding, were literally so talented,” she said. “It was definitely really, really intimidating.”

However, it looked like Brydges was the only person auditioning for April, the part she was eventually offered. There were over 800 girls who originally auditioned for the part.

“So I kind of got excited a bit because I just saw my name, but I wasn’t sure because I saw all these people acting and I did so many scenes with them,” she said. “I’m like ‘these are really good actors.’”

A couple of weeks later she learned she got the part.

“I got really excited and then as soon as I knew it, we were packing up and moving to a small condo in Montreal,” she said. She moved with her mother while her father remained in Ontario to work.

That meant Brydges spent her Grade 8 year away from her friends and classmates.

“It did suck a little bit but every single day I’d talk to my friends, I’d Facetime them at lunch, or try to contact them,” she said.

At that point the elementary school senior had to juggle school work on Google classroom, training, learning weekly performances and learning lines. The cast was taught by Cirque du Soleil artists.

“So it was crazy but it was super fun at the same time,” Brydges said. “And very tiring.”

“What a future that girl has,” said Leila Basen, one of the show’s creators and writers wrote on Facebook. “So multi-talented and such a big heart.

“You start off with a sketch for a character and then you find the actor like Maddie and you begin to dream in colour.”

Brydges said it was a big jump then from the circus and magical kid show to Grand Army. She went from playing an 11-year-old to playing a 14- to 15-year-old.

“So definitely that’s what I’ve really realized and changed.”

Now Brydges is in high school at Eastwood Collegiate Institute in Kitchener, which is a performing arts school.

“They’re really supportive of us when we have other work and they want us to do other work. That’s the reason we’re going to that school to get that diploma for our work that we want to do in the future for our career,” Brydges said.

When on set, she continues to keep up with her school work through Google classroom.

However, life is not just about acting for Brydges. She is also a competitive dancer and has released a music video.

“I just do voice lessons from here and there and then a couple like auditions that have any voice things it gives me one little level up so I can say, ‘Oh yeah, I do also sing,’” she said.

She also owns a mare named Scarlett at Travis Hall Equestrian Centre in Centre Wellington. While she hasn’t been riding much lately, she’s hoping to get back into it this summer.

Right now, Brydges is in the thick of pilot season auditions.

“I look at all the shows that are looking for their cast and everything, so those are the big times to really buckle down and I’m probably going to have, at best, three auditions a week,” she said.

“I’m very excited for pilot season but I feel like there’s always those little nerves because you’re realizing there are so many casting directors that are going to see me. So I really want to make a good impression, but I also want to have a good time and do my best.”

As important as it is to get the job, Brydges acknowledges that it’s also important to make a good impression so casting directors will remember her.