The Arthur Aces took home gold after going undefeated all season in the Ontario Women’s Major Series Lacrosse league – including the championships, which ran Aug. 12 to 14. Submitted photo

ARTHUR – After a championship weekend, the Women’s Major Series Lacrosse (WMSL) league season has come to an end.

The end-of-season championship was held Aug. 12 to 14 in Oshawa.

These teams have been battling it out all summer with some intense matches, but ultimately, it was the Arthur Aces who took home the gold after going undefeated in the regular season and throughout the championships.

After a two-year break during the pandemic, the Aces were able to get back to on the floor – and according to head coach Reg Holinshead, their season almost went in a different direction.

“It was awesome to go undefeated all season; we had challenges in the beginning to find players, actually almost folded for the season, but we reached out and they contacted us and here we are,” said Holinshead.

“It was great to be playing again, going undefeated and winning was a bonus.” 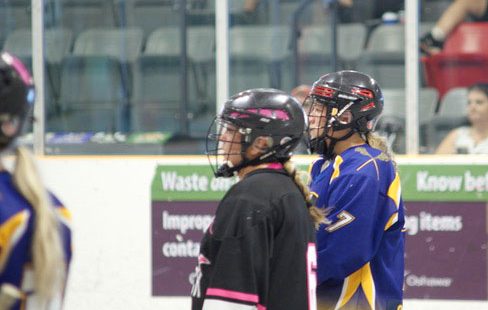 Needing to fill spots on a roster is not always an easy task and sometimes, as captain Haley Price put it, that can mean sharing a bench with someone you’ve grown up playing against.

“We had such a phenomenal group of girls who all came together after years of rivalry with one another,” she said. “Everyone showed up to every game and practice eager to be playing lacrosse again.”

The Aces took on the Grand River Attack in the final game of the championship tournament, but after being tied 1-1 going into the second period, the Aces turned up the heat, scoring four goals.

In the final period, they added one more to cement the victory.

“We had a common goal among our team – to win with integrity, and I am so proud of what we were able to accomplish as a team this season,” said Price.

The league came together in 2007 as the Ontario Women’s Box Lacrosse League, made up of five teams, and has grown considerably since, to 10 teams before the pandemic.

Clarington and Owen Sound optioned not to play this season once pandemic restrictions were lifted.

“We had zero conflicts, everyone was here for the same reason and some really great friendships have been made. We are very proud of their attitudes and working together,” said Holinshead.

*Jacob Powless is an Indigenous journalism student at Durham College.