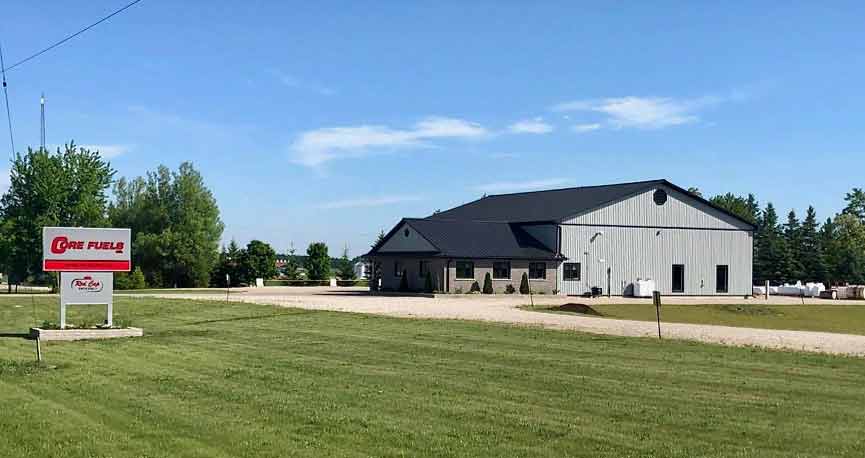 ALMA – A group of local citizens are raising concerns about a proposal for an underground propane facility here.
Advertiser file photo

ALMA – A group of local citizens are raising concerns about a proposal for an underground propane facility here.

Concerned Citizens of Alma (CCA) says the proposal is too risky for the hamlet and is calling on local residents to make their concerns known to council.

Mapleton Township council is considering a zoning amendment that would clear the way for the facility. An application by Core Fuels to add a provision for “bulk fuel storage” to the site-specific highway commercial zoning of a property at 6976 Wellington Road 7 was discussed during a July 14 public meeting of council.

Bulk fuel depots are currently only permitted in a general industrial (M1) zone.

The 9.05 acre site currently contains a 4,800 square foot office building. The applicant also owns the neighbouring site at 6974 Wellington Road 7, which has a Fast Stop gas refuelling station for public use.

Core Fuels is proposing to add four 226,800 litre underground propane tanks to the site for the storage and distribution of propane and to relocate their bulk storage operations to the Alma site.

Two tanks are proposed as part of the initial phase of development.

If approved, the site will be used as a distribution point for propane, which will come in from various refineries by cargo liner trucks, typically from the Sarnia area, and will off-load the propane into the underground storage tanks.

“Yes, the industry is highly regulated by municipal, federal and provincial laws and regulations, but, in Toronto in 2008 all it took was one human error to create over $1.8 million dollars in damage, put thousands of people out of their homes … People lost their lives, over human error,” states a CCA flyer being circulated in the community, referencing the Sunrise Propane explosion in August of 2008.

The group is also questioning if local volunteer fire fighters would be prepared for a large-scale accident and points out “vast areas” of the hamlet would be in the “risk or blast zone” in the event of an accident.

While proponents note the facility will be required to meet a high level of federal and provincial standards, CCA members point out it would be the first of its kind in Ontario.

“How can we be sure that risk assessment is accurate or the calculations made are correct?” the group asks.

CCA spokesperson Amanda Reid said the group was formed prior to an Aug. 5 Coffee with Council session hosted by Mapleton council and featuring a presentation on the project from Core Fuels.

In an Aug. 21 interview Reid said the organizational group consists of about 12 local residents, but adds, “we’ve had a quite a bit of inquiry over the last day or so of people wanting to help us get it done, or spread the word.

“As individuals we were against it but then we decided to form a committee of concerned citizens that would produce some information, make sure the word was heard by the entire community because we felt like it wasn’t that well-advertised or enough information given out to the community about it.”

Reid said the group feels the project doesn’t belong so close to a populated area.

“This just isn’t a fit for a residential area like this. We understand that this specific lot is zoned industrial ready, but a propane storage facility … it’s not the right place to put it,” she said, noting some members of the CCA live within 300 metres of the proposed facility.

While proponents tout the safety measures that will be in place, the possibility of an explosion, however remote, is a big concern, said Reid.

“With something that’s never been in Ontario, or Canada, I don’t believe there’s been enough research into it to prove that information is correct,” Reid stated.

Reid said the group’s aim is to convince council to deny the zoning change.

“We want to see the council absolutely turn it down,” she stated.

The group is planning to make a presentation as a delegation at the Sept. 8 Mapleton council meeting and is encouraging local residents to attend in support.

They are also encouraging anyone who opposes the zoning change to email their concerns to Mayor Gregg Davidson and other members of council.

“We think that’s important for them to know it’s not just 10 or 12 people that are against this, it’s 45 households or whatever the case may be,” said Reid.

CCA is also circulating a petition in the community and is encouraging anyone with questions, or who want to provide the group with information to email: concernedcitizensofalma@outlook.com.

“If anyone has anything to say about this or wants their voices heard, it’s so important as a community, as the hamlet that we are, that we speak our minds,” said Reid.

At the July 14 meeting, council passed a resolution directing the draft amending bylaw for the zoning change be presented for first, second and third reading at the next regular meeting of council at 7pm on Aug. 11. However consideration of the bylaw was rescheduled prior to the Aug. 11 meeting.

Mapleton CAO Manny Baron said in an Aug. 24 email that the the zoning amendment is now scheduled for consideration at the Sept. 8 meeting.