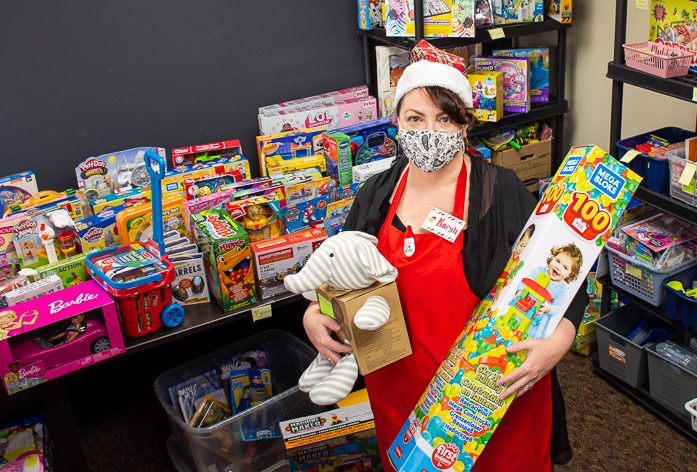 GUELPH – Gifts are wrapped and heading out the door from Adopt-a-Family’s Guelph location to over 1,400 families in the city and Wellington County.

The yearly gift program, run by the Children’s Foundation of Guelph and Wellington, typically accepts referrals of income-challenged families from social service agencies until Christmas Day.

But this year, Harron says referrals had to be cut off.

The program is serving over 1,400 families, similar to prior years, but they hit capacity sooner, at the end of November.

As the cost of living increases, Harron said “people who could have made ends meet before [are] in a position where they can’t provide those extras.”

She also noted the program has received referrals for “a lot of immigrants and refugees this year.”

Kim Major’s family is just one benefitting from donors and the program.

In 2017, Major found herself at a women’s shelter with her children after fleeing an abusive relationship. One of her children was terminally ill and died just before Christmas Day that year.

That year, Major said, Adopt-a-Family was a “lifeline.”

“I couldn’t have imagined going shopping for Christmas gifts that year, nor could I have financially managed it.”

Major said as a parent, she tries to keep a “good face on” for her children.

“You never want them to see that anything is wrong,” she said, adding the program made her “look like a great mom when I was having difficulty holding my own.”

“They made Christmas that year so that my kids had a Christmas,” she said.

Living on a fixed income hasn’t made the following years any easier for Major, and she continues to rely on the program’s support both for Christmas gifts and meals around the holidays.

Major hasn’t yet received gifts for her youngest child this year, but packages freshly wrapped by volunteers will soon be on the way.

Harron says all families have been matched with donors as of Dec. 5.

“[We’re] so thankful for everyone for pitching in and supporting,” she said.

“It’s definitely been an interesting year, but we managed to pull it off with immense worker, and volunteer, and donor support.”

Each year they see anywhere from 30 to 60 such referrals, according to Harron.

This year is likely to be no different, she said, and the program continues accepting gift card donations for those families at its distribution centre at 69 Huron St.

Gift cards in $25 increments for major stores such as Walmart, Zehrs and Shopper’s Drug Mart can be dropped off there from 9am to 5:30pm, Monday to Friday.