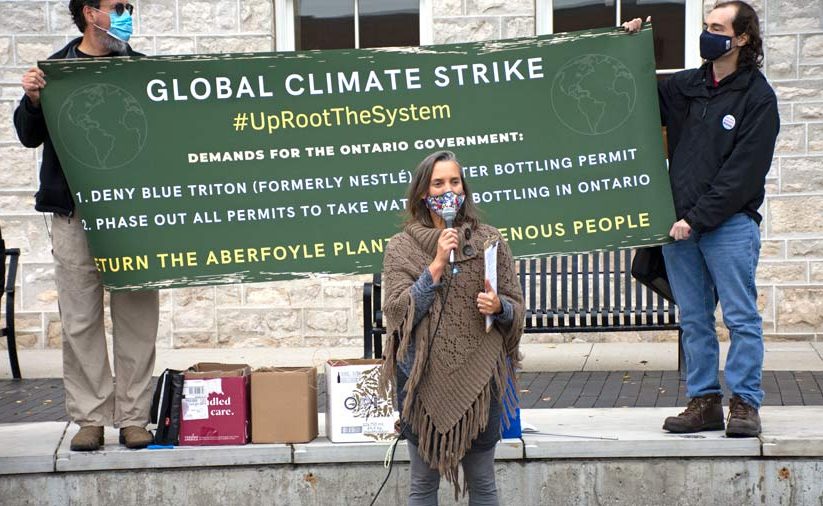 Arlene Slocombe, executive director of Wellington Water Watchers, talks to supporters outside Guelph City Hall on Sept. 24 before a long hike to Blue Triton in Aberfoyle. Photo by Joanne Shuttleworth

GUELPH – The Wellington Water Watchers embarked on another walk from downtown Guelph to Blue Triton in Aberfoyle – this time to draw attention to the dangers of climate change and to support Six Nations of the Grand River and their desire to get their land and natural resources back.

Over the summer the organization held several walks to Blue Triton wells in Aberfoyle, Hillsburgh and an uncommissioned well it owns in Elora.

About 20 supporters gathered in Market Square in Guelph on Sept. 24 to kick off the walk, which was to make a stop at the University of Guelph and gather more supporters on its journey down Highway 6.

Friday was Global Climate Strike Day – an international initiative started by Greta Thunberg in 2018 – and the local environmental group was encouraging the use of the hashtag #uprootthesystem.

Arlene Slocombe, executive director of the Wellington Water Watchers, started with a land dedication, which drew attention to the plight of many First Nations communities and their struggle to have clean drinking water on reserves.

It is more than ironic that water is being pumped from land that once belonged to Indigenous people and is subsequently being sold for profit while so many Indigenous communities are under boil water advisories, she said.

“We have a responsibility to the planet, to water, and to Indigenous communities,” Slocombe said.

“We support the return of [the Blue Triton property] to Six Nations. This walk is an act of solidarity.”

Slocombe also said the climate crisis has reached a scale that can no longer be ignored.

“The world burned around us this summer. We can no longer ignore [climate change]. We need to lift the conversation,” she said.

Provincial Green Party Leader and Guelph MPP Mike Schreiner spoke about his efforts to have Six Nations provide input on water issues at Queen’s Park, “but my amendments were voted down.

“I thank you for standing up,” he continued. “The only way the government will take action is if people demand it.”

Horeen Hassan, of the Global Climate Strike committee, said water should not be a commodity that is bought and sold.

“Water is life,” she said. “It should not be for profit. There is no climate justice without giving this land back.”

The walkers were to meet up with Maskasa Looking Horse and other members of Six Nations of the Grand River outside the Aberfoyle plant later in the day, where demonstrations were to continue.

In an emailed statement, Andreanne Simard, natural resources manager of BlueTriton Brands Canada, said the company follows and complies with the water-taking process and safety is top of mind.

“BlueTriton Brands is open to engaging in constructive dialogue, exchanging ideas, and learning about different points of view. We also fully support the right to peacefully protest,” Simard wrote.

“BlueTriton’s top priority continues to be the safety of all involved, including our employees, the protestors, and the public.”

Simard added, “In 2020, the results of the Ontario government’s Science and Policy Review confirmed that water-takings for bottling purposes is managed sustainably and that there is no scientific justification for regulating water bottlers any differently than other water users.

“BlueTriton Brands has and continues to comply with all policies and procedures set out by the government of Ontario. We believe and support a sustainable, science-driven, and evidence-based approach to groundwater resource management.”

Simard said Blue Triton, formerly Nestle Waters, is “proud of our long history of conservation, supporting our surrounding communities as an employer and contributing to local organizations. We have always maintained open and transparent communications.

“Water is one of the province’s most vital and important resources and we are committed to responsible and sustainable operations.”