WELLINGTON COUNTY – A 21-year veteran of the Wellington County OPP has been charged with sexual assault and breach of trust.

On April 24, West Region officials announced that following a three-month investigation, the Professional Standards Bureau of the OPP has laid 10 charges against the officer.

He has been suspended from duty and is to appear in Guelph court on July 28. 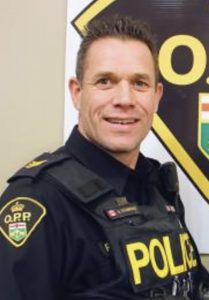 Brenda Dolderman, 53, was charged with three counts of obstructing justice and is to appear in Guelph court on July 28.

Police officials have repeatedly denied requests for more information about the alleged assaults, including the date and location of the incidents, as well as whether or not Dolderman was on duty at the time.

The SIU confirmed it was investigating seven alleged sexual assaults involving one Wellington OPP officer that were reported by the OPP to the SIU between Jan. 24 and 29.

On Feb. 13, officials with the OPP and SIU told the Advertiser the OPP’s Professional Standards Bureau was taking over the investigations.