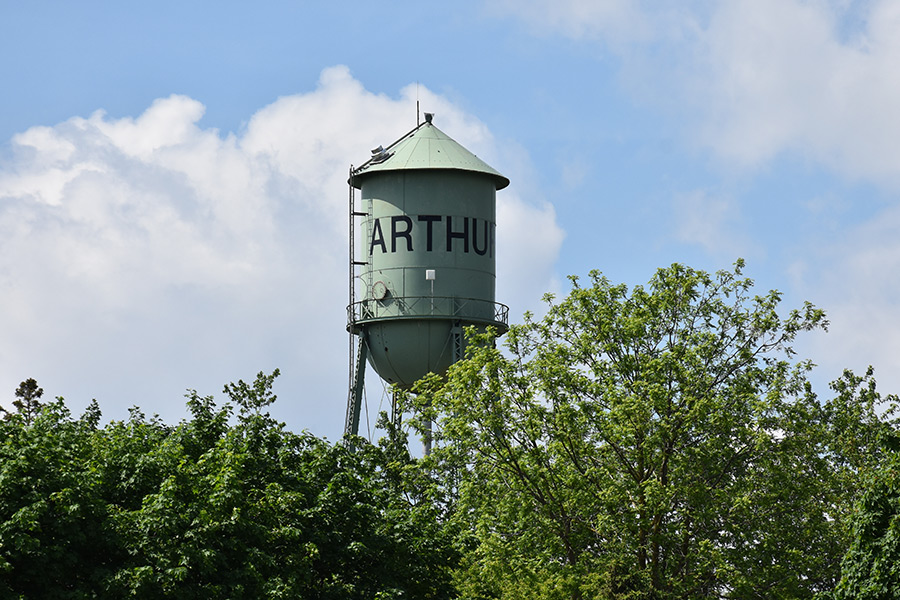 Arthur's multi-leg water tower will be decommissioned, along with the village's other tower. They will be replaced with one new tower expected to be built in 2030 at a cost of about $3.7million. Photo by Curtis Gordon

WELLINGTON NORTH – At a special meeting on June 2, council here approved plans to add a second water tower in Mount Forest, and to replace the two water towers in Arthur with a new tower.

The meeting focused on addressing the township’s infrastructure to accommodate projected population growth in the coming decades.  The township’s population is expected to grow from 12,000 to 20,000 within the next 20 years.

In addition to the water towers, wells and wastewater treatment plants were also discussed at the meeting.

A report from township staff described the Mount Forest water storage situation as a “pressing need” and three options were presented for water storage replacement.

Council agreed with a staff recommendation to maintain the existing water tower in Mount Forest (directing staff to proceed with the rehabilitation, at a cost of $950,000, included in the 2021 capital budget) and to construct a new single tower in the north end of Mount Forest, in the Industrial Park area. 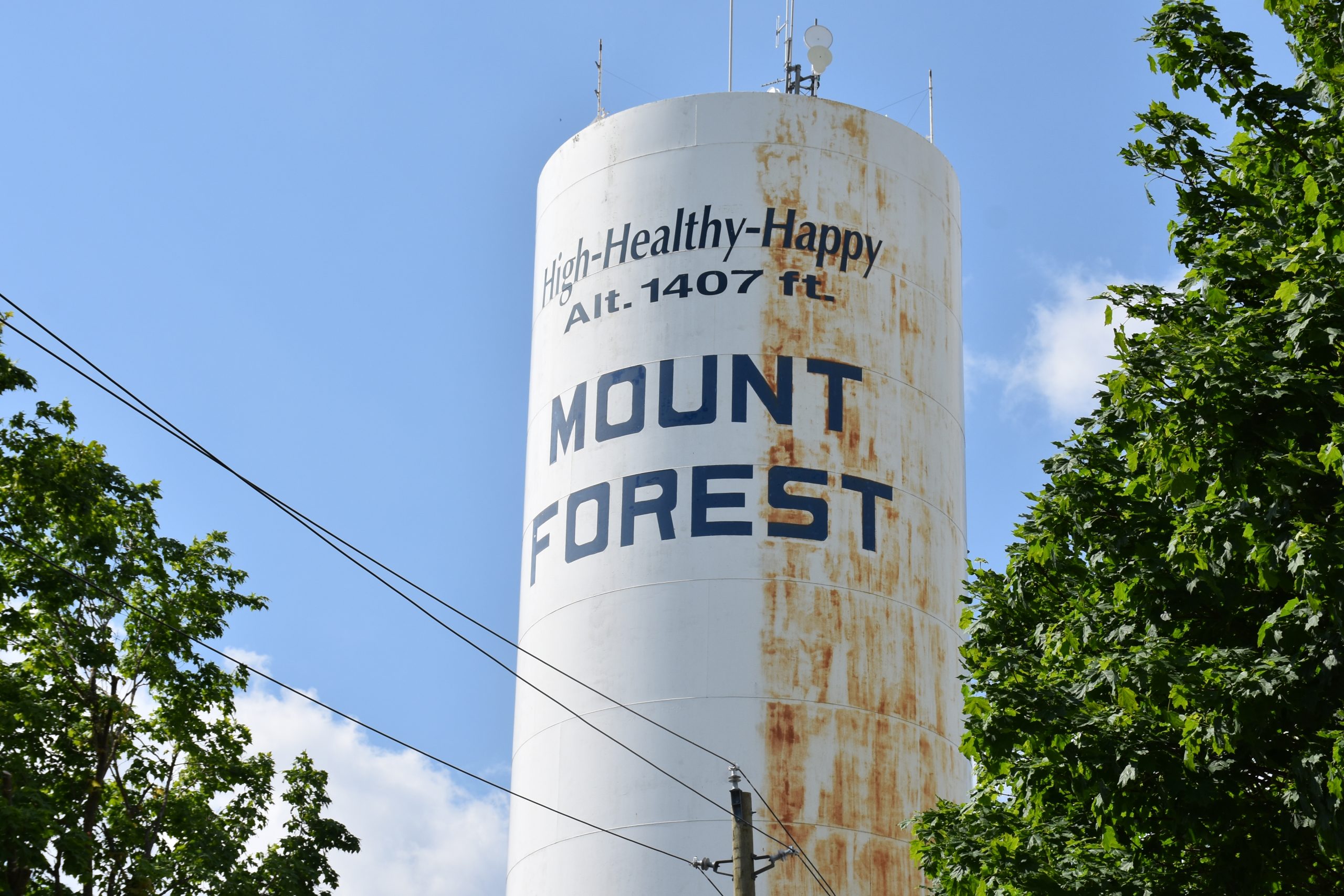 Wellington North council will proceed with the $950,000 rehabilitation of the Mount Forest water tower this year and plans to construct a new tower in the north end of town at a cost of about $5 million. Photos by Curtis Gordon

This option was preferred as it was noted that having two water storage locations in Mount Forest will provide for ease of operation, and construction of a second tower at the north end of Mount Forest would be less disruptive to the system during construction.

The Mount Forest water tower project has an estimated cost of $5 million.

“You should keep it mind that the $5,000,000 does include a watermain so it would service some new areas also,” Vanderloo said.

“So, there is some benefit to that $5,000,000 expenditure beyond just expanding your water storage. That $5,00,000 does include the cost to recoat the existing standpipe in the next year or so.”

“Aside from a few changes in our system, it’s very easy to manage. Operationally, it’s definitely the preferred alternative,” said Schmidt.

“Township staff prefer this option as it sees two water storage locations in Mount Forest, and that really does provide some flexibility and makes it easier to operate,” said Aston.

Council also voted to remove both of the water towers in Arthur and replace them with one tower with a larger capacity and higher pressure that could be matched with an additional new tower 25 to 30 years from now.

A report from Triton Engineering Services Limited suggested the township should decommission the existing Arthur water towers and construct a new tower in the north end of town at a higher operating level, to replace the existing towers.

Council voted unanimously to direct staff to proceed with the single new tower.

“The existing multi-leg (tower) is at the end of its service life and it would not be feasible to extend its life,” said Ray Kirtz from Triton Engineering.

He added the other water tower in Arthur is due for extensive maintenance work in the next five to 10 years that would cost close to $1 million.

Kirtz noted the new tower would need to be at least 10 metres higher in order to service all future growth areas.

“The existing towers would be decommissioned, and a new tower would be built with a higher operating level, which would increase the pressure across the system,” he said, adding the location of the future new tower hasn’t yet been confirmed.

“I think an estimated build time for the tower would be 2030.” 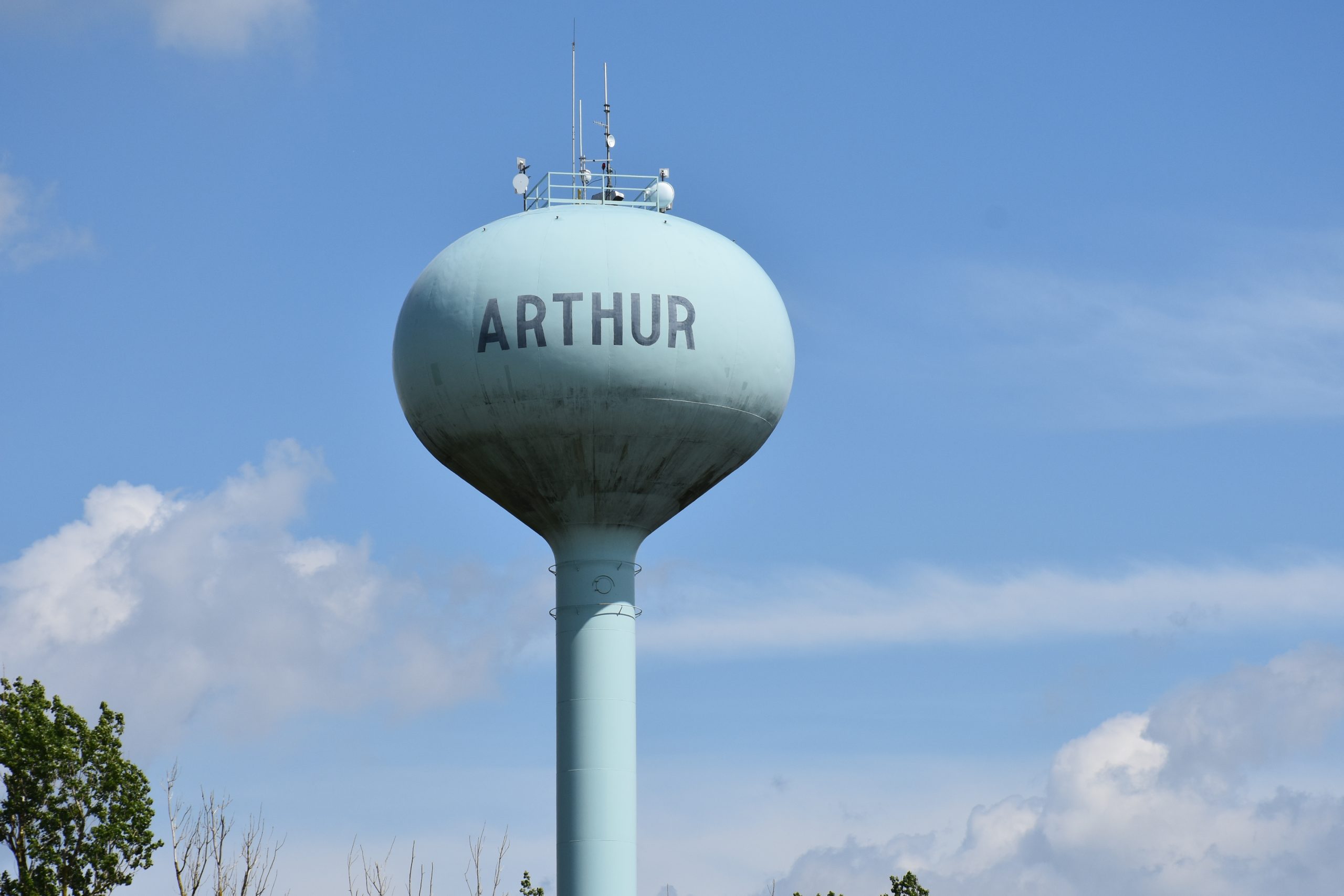 This Arthur water tower is due for extensive maintenance work in the next five to 10 years that would cost close to $1 million. Instead the township will decommission it, along with the village’s other tower, and replace them with one new tower expected to be built around 2030.

Kirtz told council a smaller tower “may give us the advantage that in the future, 2050 or something like that, you could consider a second facility.

“You don’t want to put all of your eggs into one basket here and have one huge tower right now and be basically stuck with that for the next 80 years. This, I think, would give you an opportunity that maybe you could re-evaluate in 30 years or 40 years.”

Schmidt explained, “Operationally, I think we would love to see two water towers in Arthur.

“But given the fact that we would need to increase the pressure and the fire flows, that’s what would make that very difficult to do.

Mayor Andy Lennox said it is important for the township to act now to address infrastructure needs.

“There will be additional costs if we wait too long,” Lennox said.

“If we drag our feet and wait, there’s going to be even more of a big problem to get them (these projects) implemented when the time is absolutely necessary.

“So, I think it’s important that we start nipping away at these projects and get them underway, so it is more manageable.”

Councillor Steve McCabe also stressed the importance of moving forward with these projects.

“We have to make the hard decisions not just to update our current infrastructure for the next five to 10 years, but for a generation,” he said.

McCabe added addressing these projects now will leave the next generation on solid footing.

“The people that have gone before us didn’t shrink from this duty, and neither will we.”