A 74-year-old Mount Forest man died from complications due to the virus on April 5 at Louise Marshall Hospital in Mount Forest.

It is the third COVID-19 related death in the region, Wellington-Dufferin-Guelph Public Health (WDGPH) spokesperson Chuck Ferguson confirmed on April 10.

On April 2, WDGPH reported its first death – “an individual in their 80s” – in Guelph.

The second was a man who died at St. Joseph’s Health Centre in Guelph, which was reported by public health on April 8.

The death of the Mount Forest man on April 5 is not yet included in the latest public health data.

“We cannot report it publicly until it is registered in the Integrated Public Health Information System,” Ferguson said.

“It is used by public health units to report information on cases of reportable diseases to the Ministry of Health.”

As of April 10, the WDGPH website states there are 132 confirmed cases in the region, including six within the last 24 hours.

According to the site, there are 21 confirmed cased in Wellington County, 42 in Dufferin County and 63 in Guelph.

Ferguson said officials are working to get information to the media and public as quickly as possible.

“There are protocols for doing this and sometimes a lag before we can release this information to the public,” he stated.

“We are reviewing processes to ensure this they are as efficient and accurate as possible.

“Unfortunately, this can lead to some facts being released by WDG Public Health when the facts are already known by community members.” 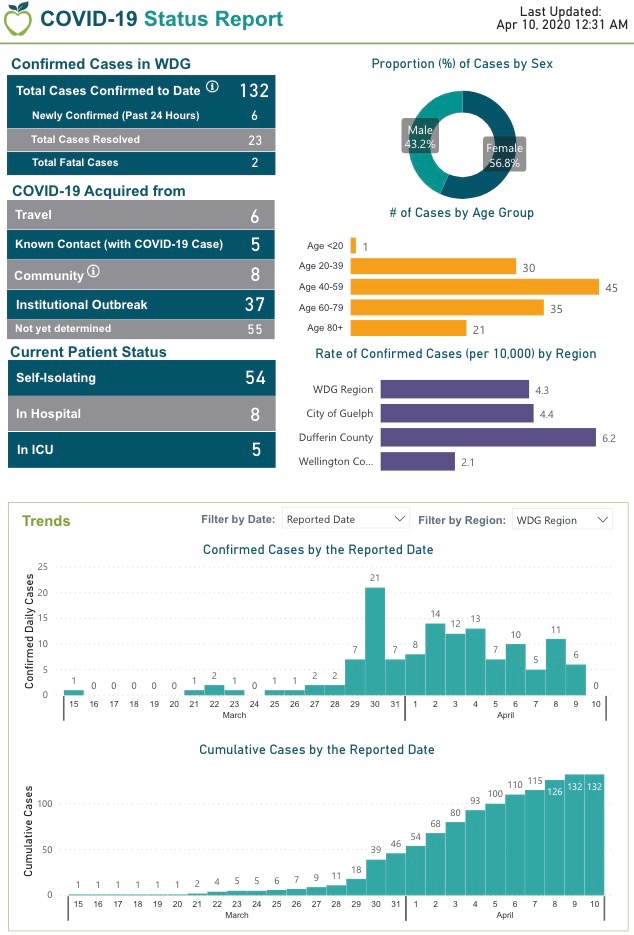