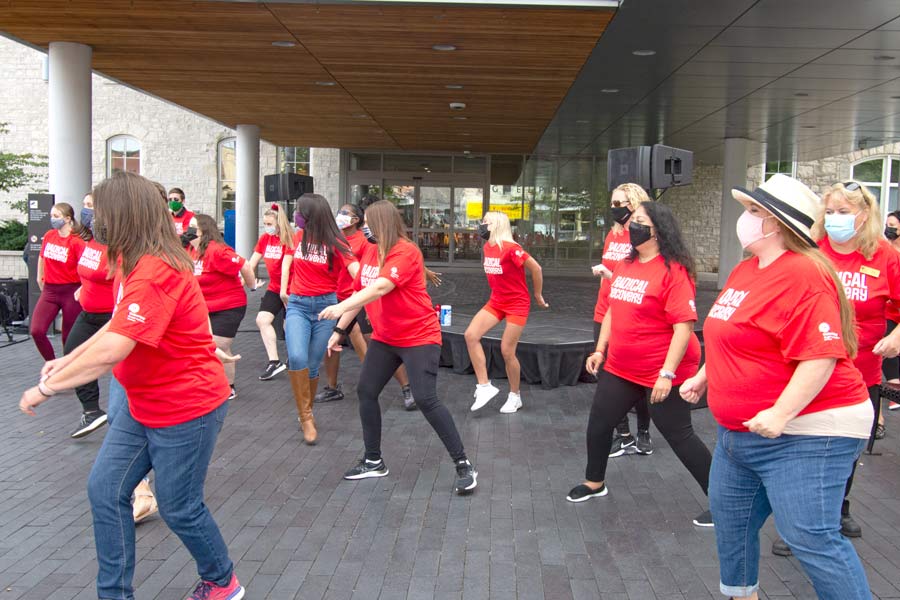 Volunteers with the United Way of Guelph Wellington Dufferin prepared a surprise dance number at the kick-off of the 2021 fundraising campaign on Sept. 15. The theme is ‘radical recovery.’ Photo by Joanne Shuttleworth

GUELPH – The United Way of Guelph Wellington Dufferin kicked off its fundraising campaign with a flash mob.

Volunteers sporting red shirts featuring the campaign’s slogan “radical recovery,” busted some moves, which came as relief from the serious nature of the speeches and the call for businesses and individuals to “dig deep” to donate this year.

The event, on Sept. 15 outside Guelph’s city hall, attracted a small crowd and was also livestreamed.

Executive director Glenna Banda said in the initial phase of the pandemic, the agency focused on getting emergency funding to community benefit organizations and coordinating emergency response efforts.

This year there’s been time to look at the broader issues and they’ve zeroed in on homelessness, food insecurity, financial insecurity and mental health as the key areas of focus going forward.

“These existed before, but the pandemic has increased the urgency,” Banda said.

“The pandemic has shone a light on these issues,” she said.

“We can’t return to pre-pandemic times. We need a radical recovery. We need to find new ways to make change for the better,” she said. 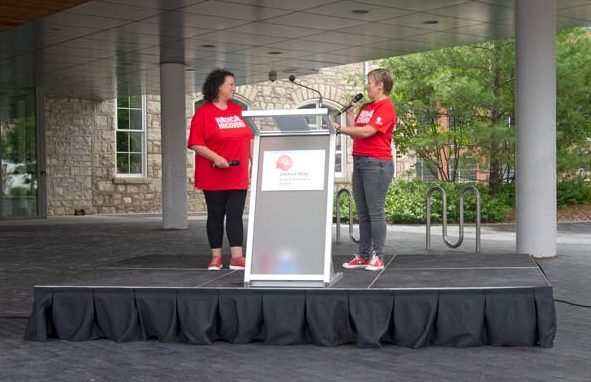 Campaign chair Patricia Tersigni, left, and executive director Glenna Banda talk about the needs in the community at the kick-off of the United Way fundraising campaign. The event took place on Sept. 15 outside Guelph city hall. Photo by Joanne Shuttleworth

Social planning is at the core of its work. It identifies needs in the community, holds an annual fundraising campaign, and distributes those funds to agencies and organizations that are filling the void.

Second only to government, United Way is the largest investor in social services in the three municipalities.

Hornseth said he came out when he was 12 and struggled for a long time in isolation. But joining the group let him know there are others just like him – and in his own community.

“For the first time, I saw queer people who were confident and productive. Community groups are important,” he said.

“You can go for years without knowing there’s help around the corner.”

In an interview after the event, Banda said the United Way gave to 52 organizations last year and this year they are expanding funding to new organizations. 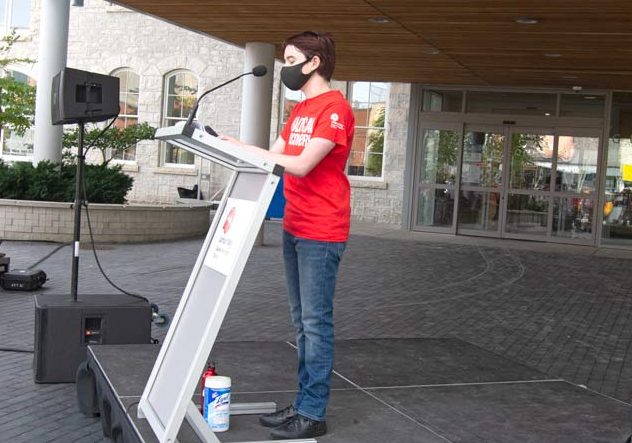 Ryan Hornseth talked about joining the support group GLOW in Dufferin County, a United Way-funded community group, which helped him deal with his sexual orientation. Photo by Joanne Shuttleworth

“We have an open call for applications,” she said. “As we narrow in on the most pressing issues, we want to open it up to new organizations.”

Reading the economic climate, the United Way did not set a specific fundraising goal for this campaign, although it raised $3.5 million during the worst of the pandemic last year and wouldn’t mind doing that again.

After a stressful pandemic year in 2020, when the future of many community benefit organizations hung in the balance, Banda said the weight of her position was heavy.

“I’m feeling better this year,” she said. “Seeing the needs in the community was overwhelming.”

While the needs are still great, there is the opportunity to shake up the social safety net and establish a new way not only of delivering services, but of addressing the underlying problems as well.

Donations to the campaign, which remain in the local community, are accepted at workplaces across Guelph, Wellington and Dufferin counties, and through the United Way office at 519-821-0571.

The campaign runs until Dec. 31 and funds will be distributed in 2022.