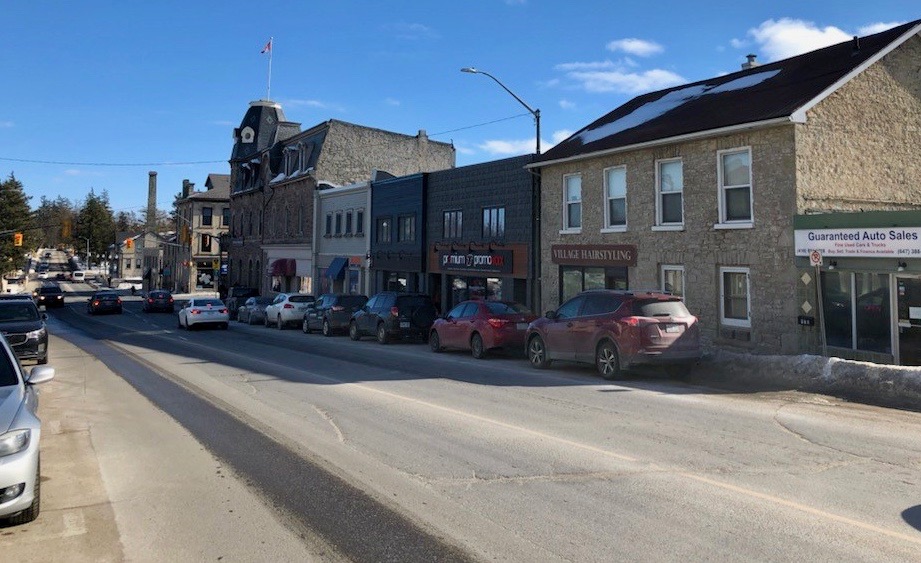 ELORA – A majority of local residents want to keep parking spaces on St. David Street North (Highway 6) in Fergus after infrastructure work on the busy road is complete.

Adam Gilmore, manager of engineering, presented Centre Wellington council with the results of public consultation at the May 17 committee of the whole meeting.

He said 41.6 per cent of respondents preferred Option 1 – which is to keep the stretch of road as-is after the watermains, sanitary sewer and stormwater infrastructure is replaced.

The infrastructure work is slated for 2023.

The second most popular option, at 27.6%, was Option 3, which also included on street parking from St. Andrew Street to Patrick Street, and slightly wider roads, boulevards and sidewalks.

Option 4 had support from 15.6% of respondents and would add separated bike lanes, wider boulevards and sidewalks, but on street parking would only be permitted on the west side of St. David Street. Road width would be slightly reduced.

Option 2, with 10.8% support, was the least popular. It envisions wider sidewalks, boulevards and roads but no on-street parking.

Gilmore said the costs of the options all hover around $4 million, but Option 1 would be eligible for $550,000 in grants and would cost $1.87 million from the tax-supported budget.

Option 4 is the most expensive at $4.01 million with 2.1% from the tax supported budget.

Councillor Ian MacRae wanted to know the status of a proposed truck bypass route, that would take some truck traffic off St. David St., which is also Highway 6.

Colin Baker, managing director of infrastructure services, said the proposed bypass – from Wellington Road 7 to Wellington Road 17 – is awaiting permission from the province.

“We have submitted a permit,” Baker said. “We are waiting for the green light to install signs and posts. We’re ready – we just need the final permit.”

Councillor Neil Dunsmore pointed out that while 41% said they wanted St. David Street to remain the same, “that means 60% want a change,” he said.

Gilmore said staff will further analyze the comments and costs and return to council with a recommendation, likely in June.