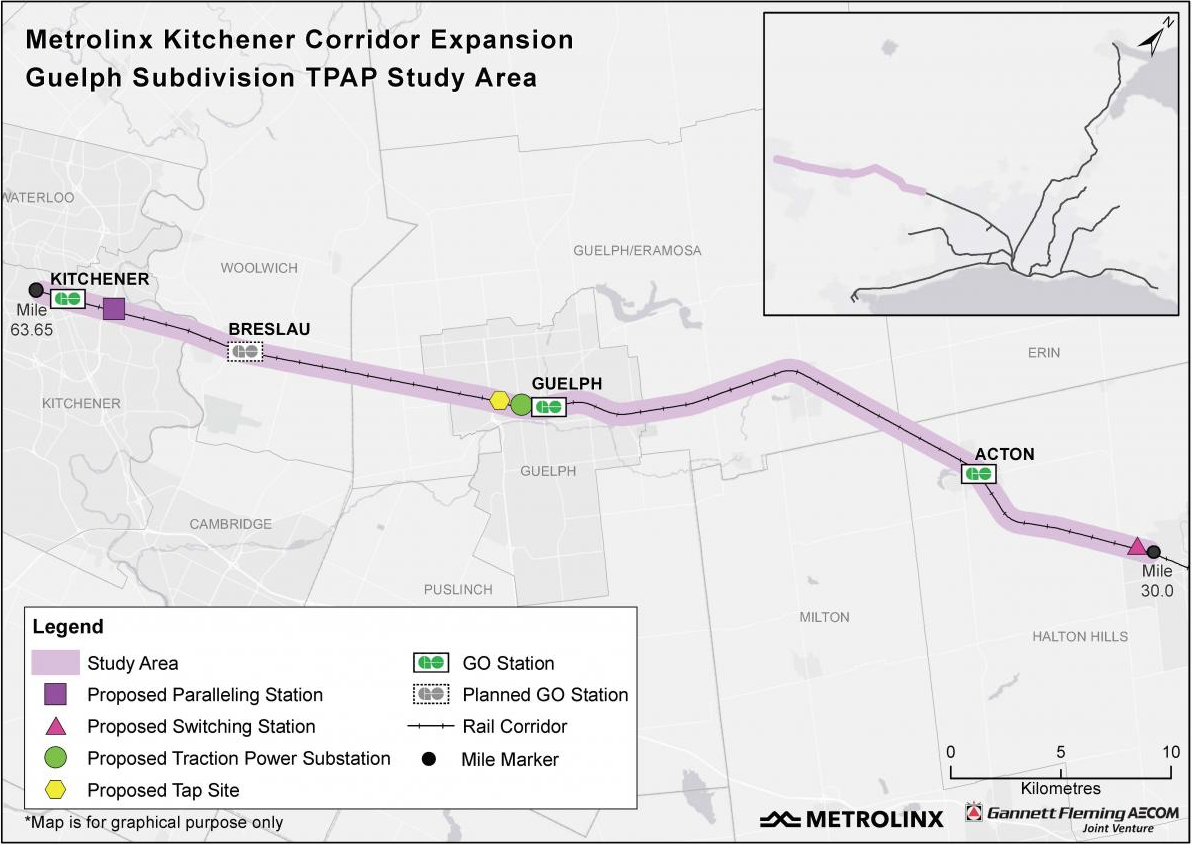 GUELPH-ERAMOSA – Metrolinx is holding a second round of public meetings on the proposed expansion and electrification of the GO train line along the Kitchener corridor.

This time, because of COVID-19, the open houses will be online. They run from July 22 until Aug. 12.

Metrolinx operates GO train and bus service throughout the province and it hopes to increase ridership on the train line between Kitchener and downtown Toronto, eventually operating all day, two-way service along the route by 2024.

To do that requires changes to the tracks and agreements with freight operators, who share the tracks.

Metrolinx hopes to power trains through an electrified system and not fuel. That would require power substations, wires running above the tracks and towers to hold the wires.

An environmental assessment is underway and public open houses and collecting public comments and concerns are part of the process.

The study area runs from Kitchener to west of Georgetown, with the line passing through Guelph-Eramosa on either side of Guelph (including through Rockwood) before exiting Wellington County where Guelph-Eramosa, Erin, Milton and Halton Hills intersect.

Metrolinx proposes a paralleling station on the east end of Kitchener, a new GO station in Breslau, a traction power substation and tap site in Guelph, and a switching station at mile 30 near Georgetown.

Information about the project will be provided to the public, who then can comment. Topics will include:

A report provided to the Advertiser after the first round of public meetings in November indicates that while most people support the idea of increased train travel and appreciate that electrification is both quiet and sustainable, common questions and concerns included: “whistles and safety at level crossings, potential effects on heritage areas and heritage properties, noise and vibration, cost and timeline associated with construction.”

In a phone interview on July 15, Guelph-Eramosa Mayor Chris White said the concerns raised in urban areas are different from those in rural areas.

Increased GO train service “is great for urban areas. The more people who take the train from Kitchener to Toronto, the better. The 401 is deadlocked,” he said.

“But you have to consider the impact on the communities in between.”

More GO train service in the day will force freight trains to travel by night, he said.

“We’ll have train whistles blowing through town (Rockwood) day and night,” he said.

White said municipalities can pass a whistle cessation bylaw, and trains will not blow their whistles when they reach road crossings, “but that means municipalities would have to take on all liability and we can’t afford it.

“We just can’t be responsible for the trains going through our community.”

White said the township is also concerned about the infrastructure required to electrify the system.

“They’ll have to cut down trees and put up these huge towers,” he said.

White stressed that trains are a great way to travel and to transport goods.

“They just need to remember that trains don’t stop in our communities but they travel through them,” he said.

“There has to be a way for that to happen without disrupting people’s lives.”

Metrolinx has an online engagement website, where participants can register to take part in the open house.

It kicks off July 22 and ends Aug. 12 and can be done at any time during that period.

Once on the website, click on the “Kitchener electrification – Guelph subdivision” project, and then hit the red “get engaged” banner for access to project information, presentation materials and to provide comments and feedback.

There is also a community relations team available to answer questions at kwGOexpansion@metrolinx.com or 416-202-3467.