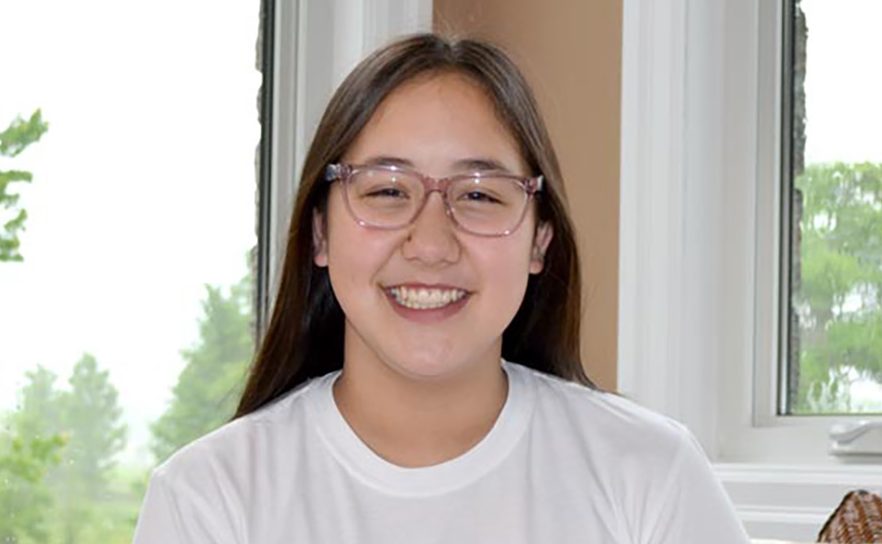 Ashley Taylor has been awarded the 2020-21 Empower Girl of the Year Award for her volunteer efforts to make a difference in the community. Photo by Paige Peacock

ROCKWOOD – Fourteen-year-old Ashley Taylor, a child actor based out of Rockwood, has been selected as the 2020-21 Empower Girl of the Year, an award recognizing young girls making a difference in their communities.

The award was presented by Mother Daughter Empower, an organization working to build young girls’ confidence.

Tara Filteau, founder and CEO of Mother Daughter Empower, launched the organization in June of 2019 to create a space that celebrated and highlighted successes of girls aged seven to 14.

“I love volunteering and just to be recognized, I obviously don’t volunteer for recognition,” Taylor explained.

“I didn’t expect to be selected.”

Taylor said the award came as a surprise to her. She was volunteering pre-COVID-19, and once the pandemic hit, she wasn’t sure what she would be able to do for volunteer work.

She said she didn’t think there was so much to do with the ongoing pandemic, but she’s found ways to continue her volunteer efforts.

“I think Ashley really goes above and beyond in her home, her community and her school with all of the different fundraising and volunteer initiatives that she was doing,” Filteau explained.

“She was constantly an active volunteer and constantly taking on new fundraising initiatives and she was promoting them, and she really went above and beyond all applicants when it came to that area of really trying to make a difference.”

Taylor started volunteering at a young age through school initiatives. She did little things on and off but said she started really getting into volunteering in the last three years.

“My school was always very passionate on helping the less fortunate and it’s just a point in life where you realize some people don’t have as good of things as you and you want to help them,” Taylor explained.

“You want to do all that you can, and I really like doing that.”

Now Taylor searches to see what volunteer opportunities are available and jumps at every one she can.

“I have a lot in life, and I hate having the feeling knowing that other people have it worse, and that’s not usually something they control, especially kids,” she explained.

“So I want to help people feel like they’re respected, like they have a place and it’s just a satisfying feeling.”

She got together with friends and did a Krispy Kreme fundraiser. They were hoping to raise money for two surgeries at $250 each but Taylor said they’re close to four now.

Taylor said she’d like to recognize the Rockwood community for their support in the fundraiser. Out of the 80 dozen boxes sold, 45 of them were from Rockwood friends and neighbours.

In addition to working with Operation Smile Canada, Taylor occasionally works with Basket Brigades to package and deliver meals to less fortunate families during holidays.

The Advertiser asked Taylor what her advice would be to young children her age looking to get involved and make a difference.

Taylor said one of her most memorable volunteer moments was in September 2019, when she volunteered with Million Dollar Smiles to build a playground for chronically ill children who can’t go to a regular playground due to health risks.

“We raised money for them and then me and my family actually got to go and build the playground at the site,” she said.

“It was really cool because we got to see the kid come out and enjoy this new playground and it was a really satisfying feeling to be able to actually see the people that you help.”

In addition to her volunteer work, Taylor also takes part in acting, which she began in elementary school.

“I fell in love with it and I love that you can act and be other people which is really fun,” Taylor explained.

In her acting career, Taylor is currently working on a television show called the Wright Girl. She shot the pilot show pre-COVID but now due to the pandemic, the project has been paused.

Taylor said at this time she will continue to act alongside volunteering. “I’ll take on as much as a I have time for, we’ll see how that goes.”

“We were very excited for Ashley and we know it’s really nice to celebrate her right now but we’re just as excited to see what she’ll continue to accomplish in her life,” Filteau said.

Taylor has also been selected as a recipient of the Royal Canadian Legion Cadet Medal of Excellence, through the 121 Red Arrows Air Cadets Squadron in Guelph, for community work.