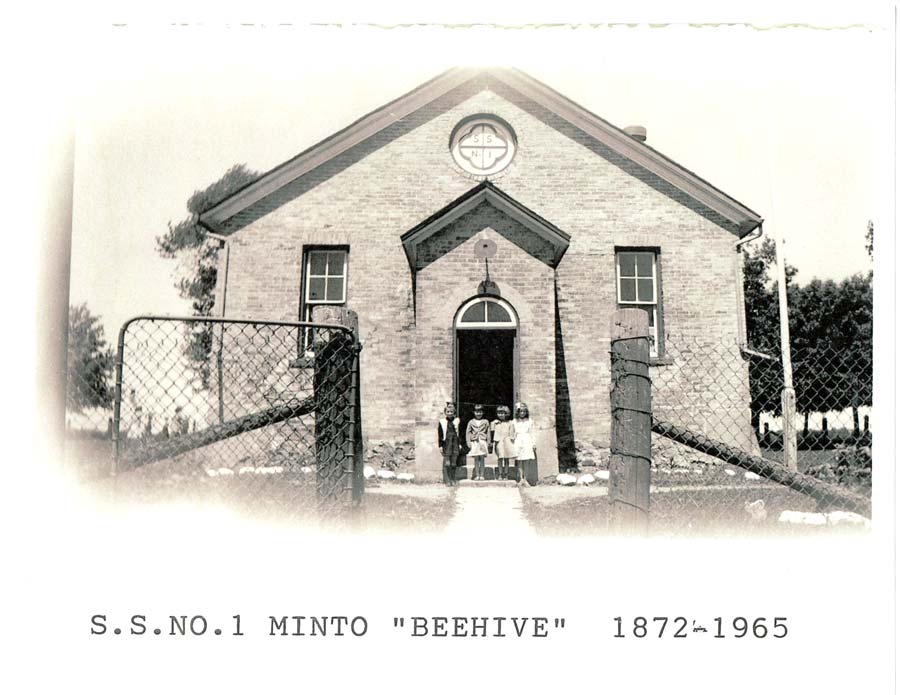 Beehive history - Life in the Minto Township community of Beehive was largely based around the local school. LEFT: SS #1 Beehive was established in 1872 and closed in 1965.
Submitted photo

MINTO – The future of Beehive Park has become a hot topic recently.

Some of us are old enough to remember the school and its transition to a roadside park.  Others, however, are relative newcomers to Minto and to those it’s just a park. Some are not even sure where it is.

To throw a little light and understanding, we offer the following history of “Beehive.”

Known as “Queen’s Bush” at the time, the first settlers arrived to this section from 1852 to l856. These pioneers had to endure much in the way of hardships – never ending forest, wolves howling at night, loneliness – all in the challenge of trying to carve out a life.

The first roads were crudely constructed trails and many were laid with logs (known as “corduroy roads”).  Gravel was scarce. About 1912 heavy road rollers arrived along with gravel to make the road a little better.  About 1929 the road now known as Wellington Road 109 – Harriston to Teviotdale was paved. In those times there was a toll gate in the Beehive vicinity with a charge of five cents for a one horse buckboard or cutter, and 10 cents for a two-horse outfit. Money collected went for the maintenance of the road.

Back then there were many taverns in the area – two were at Beehive. These were a necessity to provide food and lodging for the men who did extensive teaming to Guelph as well as travellers with dry goods for stores.

At Cotswold Corners was a settlement of which, until recently, the church was the only remaining evidence.  There was a store and post office, and behind the store a one room log schoolhouse. It was called S.S.#1.

By 1871 it was found necessary to re-arrange the entire school sections of the township and as a result a new school was erected on the west corner of Lot 96, Concession C, owned by Malcolm Ferguson.

Owing to the fact that so many settlers in the area kept bees, this school was aptly named S.S.#1 Beehive.

This section became a popular site for sports and picnics.  The “Beehive Picnic” was one of the most well attended gatherings in the township.

In the early 1900s the “Beehive Lumberkings” were responsible for the founding of a rural hockey league.  After a long hiatus, hockey was revived in 1948-49 when a group of local lads who had never played organized hockey before joined forces under the leadership of William Gilbert.  Known as the Beehive Bruins, they participated in the Hickory Hockey League against teams from Conn, Farewell, Gleneden, Holstein and Teviotdale. The Bruins distinguished themselves each season with appearances in the semi-finals, and in 1953 captured the Arnold Darroch Trophy for the Inter-County League. 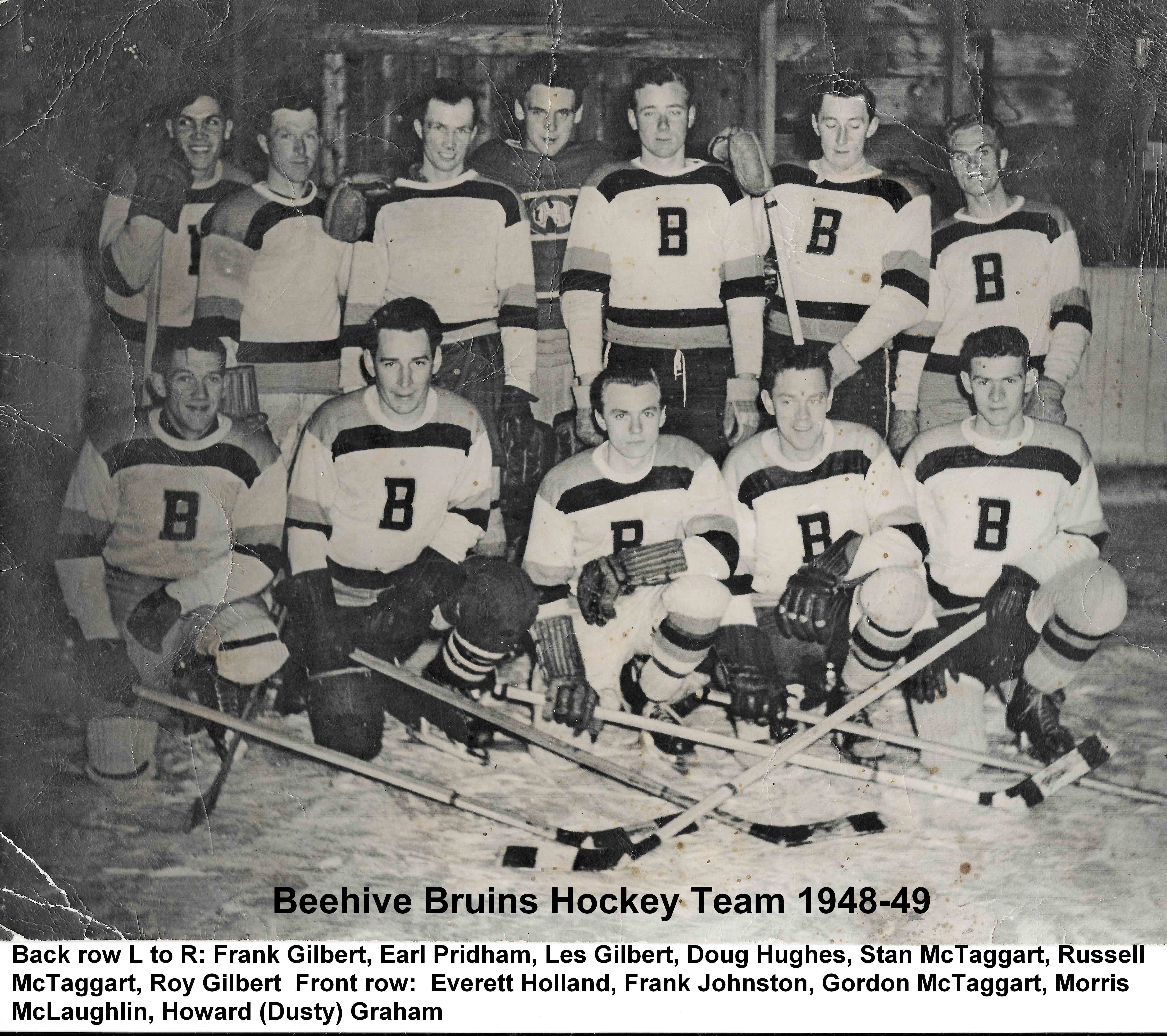 The Queen’s Silver Jubilee was fittingly celebrated in the school on May 3, 1935.  A program was given by the children, a Jubilee tree planted, patriotic addresses were read by school trustees, and the flag was raised and saluted.

At the time of the Great War of 1914-18 many of the local boys donned the khaki – some were even to give the ultimate sacrifice. During the war a strong Red Cross Society was formed in this section and contributed generously to the needs of the boys in France.

On Nov. 11, 1935 a beautiful marble tablet was unveiled by Colonel Pritchard of the 153rd battalion.  The tablet was placed in the school as a sacred memory to the fallen heroes.

Early in the spring of 1939 vast improvements were made to the school grounds. The teacher and pupils planted 200 tulips and started a perennial border. A thoughtful neighbour donated and planted several trees and shrubs.

During its hundred year plus history in the educational system, S.S.#1 had a combination of 40 male and female teachers, including Leola (Stone) Pritchard and former Listowel Mayor and Perth MPP  Bert Johnston.

Time marched on, and by the 1960s the government decided to close all country one-room school houses and bus students to a central location. For Beehive area children this meant transporting to the new Minto-Clifford Public School on the outskirts of Harriston. All the township school sites were eventually sold and several lots were big enough to be converted to private residences. Beehive was not, so the building was eventually torn down.

The provincial Department of Highways (today known as the Ministry of Transportation) made the site a roadside rest area with picnic tables and a circular drive. Shade trees still rim the yard.

Around 2000, amid municipal amalgamation and provincial downloading of responsibilities, the Beehive Women’s Institute lobbied with the newly-formed Town of Minto to obtain the site and it was purchased from the province for $1.

In 2003 the Institute purchased a stone, had it engraved with a sketch of the old school and dates, and placed it on the park site surrounded by a perennial bed.

Over the past 50 years this original Beehive School site has been used for picnics and rest stops, not only by travellers, truckers and local OPP, but by the locals as well for picnics at a “place away from home at home.”

The Beehive Park continues to remain a focus of community spirit that has endured for over 150 years and there’s still enough of that community spirit left to try to save this little spot of green space.

*This article includes excerpts from the Women’s Institute Tweedsmuir History Book and local publications. Willa Wick is a member of the Harriston Historical Society and the Committee to Save Beehive Park.

*Editor’s note: Minto council declared Beehive Park surplus on Dec. 3 and directed staff to provide notice of a proposed sale. Council referred the matter back to the Parks and Recreation Advisory Committee after a Jan. 21 presentation from residents opposed to the sale.