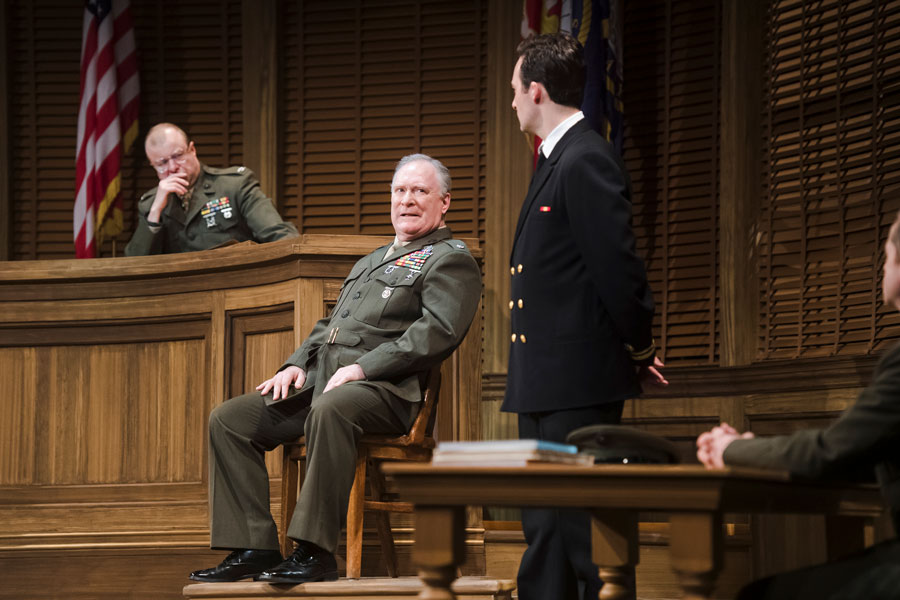 Courtroom drama - A Few Good Men is on stage at the St. Jacobs Country Playhouse until March 22.
Submitted photo

However, in the case of St. Jacobs Country Playhouse’s season opener, A Few Good Men, the truth is far better than the litany of crimes that precipitate Jack Nicholson’s iconic line.

Drayton Entertainment has done it once again, creating a flawless and riveting live local performance of a play that was once also a fabulous major motion picture.

A Few Good Men was on stage at St. Jacobs Country Playhouse until March 22.

For the sceptics out there, Drayton Entertainment’s A Few Good Men is a bit slow to develop in the first act, but by intermission it’s at full throttle and the audience is invested.

A Few Good Men, written by Aaron Sorkin, is a courtroom saga that tells the story of two marines, Lance Cpl. Harold W. Dawson and Pfc. Louden Downey, accused of killing a fellow marine, Pfc. William T. Santiago, at the US naval base in Guantanamo Bay, Cuba.

Lawyer Lt. J.G. Daniel A. Kaffee, played by Tyrone Savage, takes on the case, despite having never actually argued a case in a courtroom before, with the help of fellow lawyers Lt. J.G. Sam Weinberg (Daniel Greenberg) and Lt. Comdr. Joanne Galloway (Shannon Currie). While the case originally looks open and shut, deeper investigation shows that higher up officials may have actually ordered an illicit disciplinary measure known as a “Code Red.”

What follows is a courtroom drama that plays out with all the suspense and uncertainty of the Academy Award nominated film, A Few Good Men, starring Tom Cruise and Jack Nicholson.

For movie fans, a big concern may be that Benedict Campbell will not portray Lt. Col. Nathan Jessep with the passion and authority of Nicholson.

Put your mind at ease.

The truth is Campbell is fantastic in the role. While he seems to mimic his performance off of Nicholson’s interpretation of Jessep, Campbell commands the stage every time he makes an appearance. Occasionally, even audience members who know the story were left wondering how the court case would turn out.

Savage portrays a realistic and confident lawyer who is being tested beyond his comfort zone. Even at times when Savage is not the main actor on stage, he never breaks character.

From smirks and facial expressions to fidgety hands and mannerisms he is Kaffee from the time he sets foot on the stage. In a drama where subtleties are so important to the overall storytelling, and in which character development drives the plot, Savage stands out for his outstanding performance both in the spotlight and on the periphery.

Both Greenburg and Currie are also aware of their actions when they are supporting characters, allowing the audience to stay in the courtroom. At no time did the actors fall out of character and break the spell the show cast.

Nathanael Judah as Dawson and Thomas Duplessie as Downey were convincing as marines.

More than three quarters of the play takes place in the courtroom and set designer Sean Mulcahy took the challenge in stride.

The curtain didn’t close once, and core props on the set remained on stage for the duration. It was the configuration and use of the props that indicated to the audience where the scene was taking place and with a tilted floor none of the courtroom subtleties were missed by the audience.

Yet it was somewhat distracting wondering whether the tables and chairs were going to slide down the sloped set into the audience.

Also, because the set never changed, flashbacks showing what happened the night Santiago (Oscar Moreno) died were a bit confusing.

Director Marti Maraden seemed to use stage placement and lighting to indicate a flashback.

However, because events in the past and present occurred on the same set and in the same place, it was difficult to differentiate what was happening in the now and what had already taken place.

Once the storyline moved into the courtroom all of the actors excelled and left the audience thinking they were actually in a real courtroom, watching unexpected events unfolding in real time.

Drayton Entertainment is cancelling all remaining performances of A Few Good Men (St. Jacobs Country Playhouse) in an effort to mitigate the potential spread of coronavirus (COVID-19). This schedule change is effective immediately and will impact performances through Sunday, May 3.