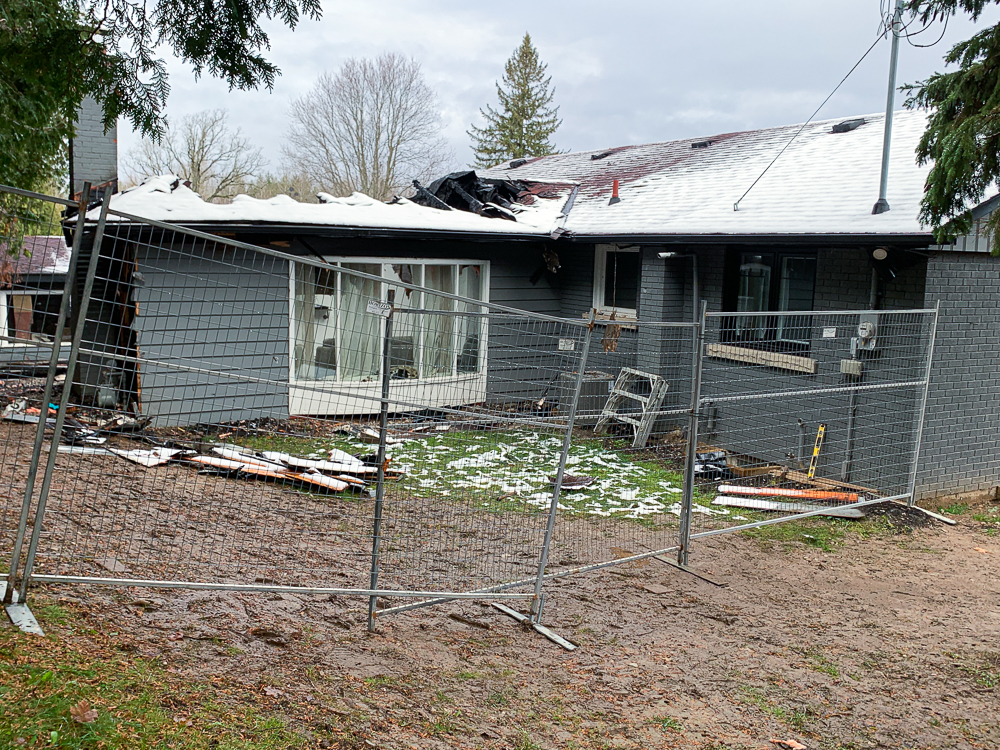 The Guelph Fire department responded to a call for service at 7696 Wellington Road 124 on the evening of Nov. 13. Resulting damage from smoke, water and fire has left the home unfit for living in and a preliminary estimate from Guelph fire officials pegs the damage at $450,000. Photo by Jordan Snobelen

Update – Nov. 18: Macy, a family dog which had gone missing after a Guelph/Eramosa house fire has been located safe and well and reunited with its family.

GUELPH/ERAMOSA– Residents are displaced and a family dog has gone missing after a Guelph/Eramosa house fire on the evening of Nov. 13.

The Guelph Fire department responded to a call for service at 7696 Wellington Road 124 on Saturday with firefighters from multiple stations and departments, including Puslinch and Guelph/Eramosa, arriving to find a single-storey house ablaze with flames reaching “well above the roof line,” according to Guelph Fire deputy chief Ryan Schubert.

The call came in around 5:30pm Saturday with fire crews reportedly arriving shortly after.

Tanker trucks from fire stations in Rockwood and Puslinch shuttled water from hydrants farther downthe road in Guelph to porta tanks at the scene because the home, being outside of Guelph city limits, was covered by a Guelph fire protection agreement and was not serviced by a municipal water source, Schubert explained.

Fire fighters attacked the fire from outside and within the home, according to Schubert, preventing fire spread to adjacent sections of the home.

Nobody was home at the time and Schubert wasn’t clear on who called 911, but said two dogs inside managed to escape unharmed.

“Smoke visibility in this actual house upon arrival was really not described [as] anything beyond ‘a bit of a haze,’” Schubert told the Advertiser.

“The fire was venting into the atmosphere, it would appear to be in the ceiling or roof section and so surprisingly of course that created a condition where the [dogs] that were in the home had survived,” he explained.

But one of the dogs who managed to escape from the house has since gone missing.

“There’s been several sightings in the nearby forested areas … sadly I understand there were about 100 volunteers out yesterday looking for, and calling for this particular [dog] … there’s some considerable effort I know that the homeowners have advanced here to try and find the dog,” Schubert said.

Resulting damage from smoke, water and fire has left the home unfit for living in and a preliminary estimate from Guelph fire officials pegs the damage at $450,000.

Residents “are anticipated to be displaced for some time,” Schubert said, adding a “good portion” of the home will need to be rebuilt.

Emergency shelter and food were offered by the Red Cross but were turned down because residents had family and friends in the area to turn to.

The on-scene portion of the department’s investigation into the fire has been completed and the property has since been released back to the owners with the preliminary cause determined to be “accidental in nature,” according to Schubert.

“The fire investigation, of course, will continue in the background off-site, focusing on cause and origin and so forth,” Schubert said.

The Advertiser attended Guelph/Eramosa on Saturday evening and observed from the intersection of Wellington Road 124 and Watson Parkway, what appeared to be a lengthy procession of flashing lights and emergency apparatus in the distance to the southwest.

Despite having a well-established practise to report the news from emergency scenes, the Advertiser was prevented from proceeding down Wellington Road 124 by a Guelph Police Service officer who refused the newspaper access or accommodation despite saying, when questioned, that nearby residents would be permitted access.

The Advertiser did not receive responses to several emailed questions submitted to media relations coordinator Scott Tracey about: reporter access, traffic management, officer conduct, why the service prevented a reporter from doing their job, the service’s position on the role of reporters and what action the service would take to ensure the occurrence wouldn’t be repeated.

Instead, the Advertiser was told by professional standards sergeant Lester Tang to place a complaint with the Office of the Independent Police Review Director.

Tang disagreed with a reporter’s media inquiry calling it “a complaint” about a police officer rather than a media inquiry.

Tracey was again asked if the police service wished to provide any comment for this story but the Advertiser did not receive a response.

Responding to an email from the Advertiser about the situation, Canadian Association of Journalists president Brent Jolly said, in part, “As the eyes and ears of their communities, journalists are responsible for keeping citizens abreast of important information, actions, and decisions that have an impact on their day-to-day lives. This includes in moments of local celebration, but also, during times of tragedy.