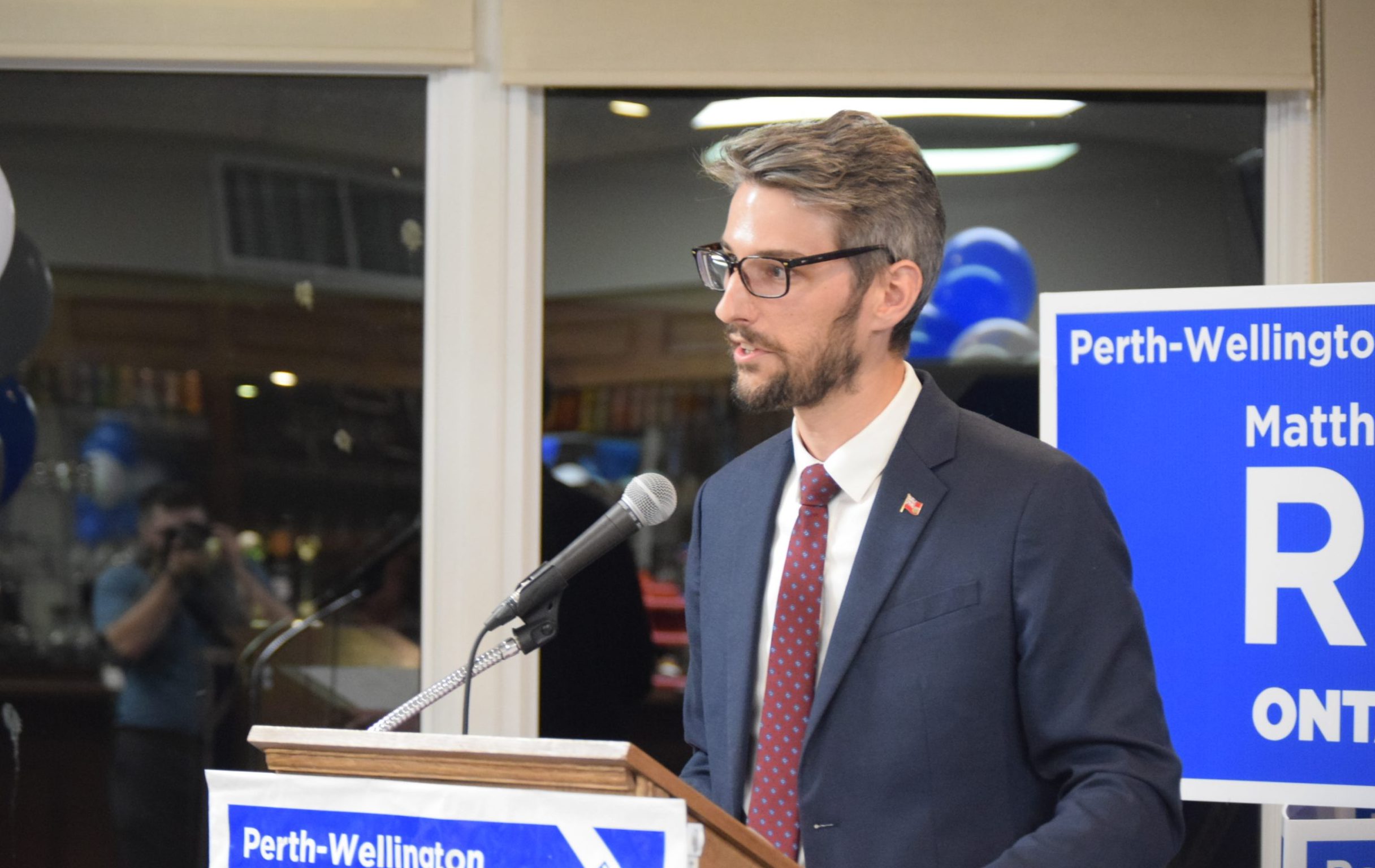 PERTH-WELLINGTON – Progressive Conservative candidate Matthew Rae was elected MPP for this riding in the June 2 election that saw Premier Doug Ford’s PCs expand on the majority government they held after the 2018 election.

Across the province the incumbent PCs took 83 seats, compared to 31 for the NDP, 8 for the Liberals and one for the Green party. There was also one independent elected.

Both Liberal leader Stephen Del Duca and NDP leader Andrea Horwath resigned their seats after the results were confirmed.

“For everyone here tonight, thank you so much,” Rae told supports gathered at the Mitchell Golf and Country Club on election night.

“The people of Perth-Wellington have cast their vote and I have accepted their verdict – not only with excitement – but also with the solemn anticipation the weight of elected office holds.

“It’s an honour to be elected as Perth-Wellington’s next Progressive Conservative MPP.”

After Rae thanked his supporters, campaign team, family and everyone that voted for him, Pettapiece took to the podium to give him a gift.

“This is a picture that was in my office for almost 11 years,” Pettapiece explained, handing Rae a landscape.

“It signifies what a politician has to be, how he has to represent the riding and they have to keep on doing that as long as they’re here. It says … ‘Persistence.’” 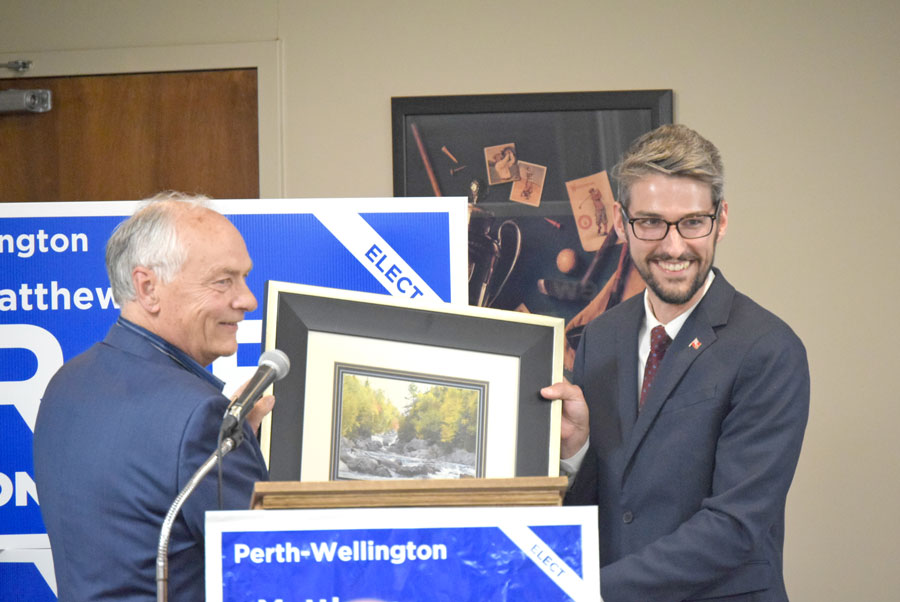 When asked what advice from Pettapiece has stuck with him, Rae responded: persistence.

“It takes a lot of persistence, no matter what party you’re from, to get things done for your community,” Rae said.

“So I know going forward, that will have to be a key characteristic I use.”

Rae noted one of the key priorities for the government is rural broadband.

“Our re-elected government is committed to having rural broadband across Ontario by 2025,” Rae said.

“That will happen under this mandate. (We are) continuing to work with our local telecommunications companies to get those projects finished. There are still areas in the riding that need high-speed internet.

“The pandemic has definitely shown us that that is needed, whether it’s for hybrid work or online learning, so continuing to make those investments locally.”

Affordable housing, long-term care, and agricultural issues are all on Rae’s mind as he heads to Queen’s Park.

He said the biggest issue he found when knocking on doors was affordability – and that issue persists in many facets of his constituents’ lives.

Rae is hoping a cut to the gas tax coming on July 1 and other business tax credits will alleviate some of the pressures facing Ontarians.

Rae, a Harriston native who worked on Perth-Wellington MP John Nater’s first federal election campaign in 2015 and managed Pettapiece’s 2018 campaign, received some advice from his predecessor.

“He has to remember the people of the riding,” said Pettapiece.

The decline was cited as a concern by the NDP’s Burbach.

“I think the thing that surprised me the most was how low the voter turnout was,” she said.

“It actually surprised me and disappointed me, because democracy doesn’t work too well if people aren’t participating … I’d like us to do something to change the system so people can become more engaged.” 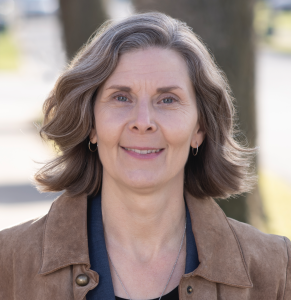 “So, you know, really, it is a minority of people who want the PCs to be in power, yet they have a majority government.”

Burbach feels affordability was a major concern among local voters this time around.

“A lot of people were very concerned about affordability for everything from housing to the cost of food, to paying for extras, of their health care insurance costs going up … that was a big concern at the doorstep, for sure,” she said.

“And, you know, it’s a complex problem, but there are certainly things that a provincial government could do to help,” she observed.

Burbach offered congratulations to Rae and lauded him for his open approach.

“I want to thank him for coming to all of the debates and talking with us because many of his PC colleagues did not attend debate,” she said.

“So I really appreciate that. And I appreciate that he gave (other candidates) his cell phone number so that we can contact him and he’s going to be very open and transparent with his communication.

“So I plan to be texting him soon and starting a dialogue.”

Fox was also concerned by the number of voters.

“To be honest I was really surprised at the lower voter turnout. Every debate I went to, every community event that I was at, I reminded people to vote,” said Fox.

“It’s significantly gone down. We need to, if we’re going to hold our members of provincial parliament accountable during an election, we need to get out and vote.”

Fox feels “complacency” was behind the resounding Tory win. 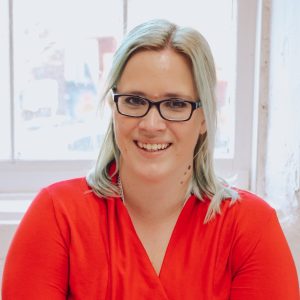 “A lot of people that I was speaking with that were supporting PCs, or in general the conservative values, a lot of their responses were generally driven by ‘It’s not that bad,’ or ‘They can’t get worse,’ … Well, we know it can,” she said.

“And we’ve seen that especially during the pandemic. So we’ve been reminding people, you know, Doug Ford hadn’t confirmed that the pre-election budget was even going to be the same budget going forward. There really wasn’t a platform.”

Fox added, “We’ve had historical documentation for the last four years of cuts and changes in health care, education, agriculture, all of the above.

“But when we reminded people, I think that generally triggered either a ‘That’s not that bad,’ or ‘It can’t get worse,’” type of response.

“I’ve always been active in everything,” she said.

She continued, “We know that this riding is a mix of urban and rural. And when talking to people on the frontlines, they reminded me, you have you represent everybody, not just the ones you pick and choose.

“And a lot of people are hurting in Perth-Wellington, so we will continue to fight and advocate for them.”

Bisutti was happy to see her party had increased its overall vote share despite a lower turnout across the province.

In Guelph, residents voted to return Green Party leader Mike Schreiner to Queen’s Park once again, and the overall party vote increased by 4.6% or 12,185 votes above 2018.

Bisutti’s share of the overall votes is up at 6.3%, but fewer people voted in the riding than in 2018. 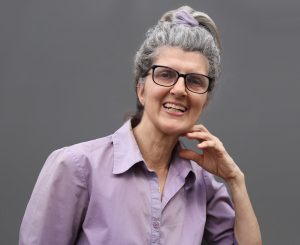 “I thought people were more worried about the environment, so that was disappointing,” she remarked, believing more voters would have looked to the party, not necessarily her as an unknown candidate, bearing the future in mind.

Bisutti suggests another four years of governing by the PCs will leave constituents with “buyer’s remorse.”

“Four more years of cuts to services and basically tax decreasing for the rich will put the PCs in a bad position four years from now,” she said.

As for the environment, “eating up 175 acres a day of farmland is just not sustainable,” Bisutti said, referencing a number gleaned from Statistics Canada about the amount of agricultural land replaced by development, and oft repeated by the Ontario Federation of Agriculture.

The first-time candidate won’t be running for office in the next election.

Instead, she’ll be putting her efforts into getting the party name out across the riding and finding someone younger and better known.

A worsening climate situation, she said, is going to have increased influence on the politics of the future.

“We need to get more young people in politics,” said Bisutti.

-With files from Jordan Snobelen and Connor Luczka