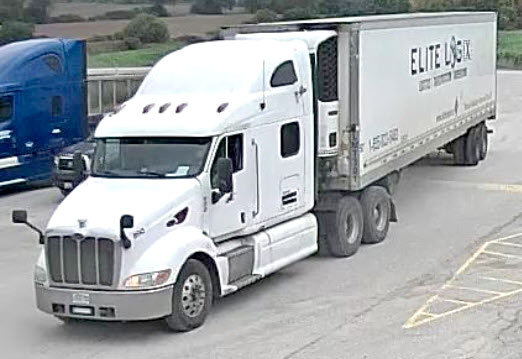 The OPP has charged one person in connection with the Oct. 14 theft of a tractor trailer load from a business in Guelph/Eramosa. Submitted photo

GUELPH-ERAMOSA – Police have arrested and charged a suspect in the theft of a tractor trailer load worth $300,000 from a business here four months ago.

On Oct. 14, at about 11:10am Wellington County OPP received a report of a load theft from a business on Speedvale Avenue in Guelph/Eramosa Township.

Police say that on Oct. 5 at 2:30pm a truck driver using a fraudulent company and a stolen trailer with Elite Logix Trailer on the side, entered the yard and loaded it with 11 Skyjack lifts and 25 red vinyl rolls.

“The load was to be delivered to two separate locations in the United States, however the property never arrived,” police stated in a press release.

The fraudulent company name was listed as T.T. Transport out of Quebec.

Police say a warrant was executed at a warehouse in Saint-Jerome, Quebec, where seven Skyjacks were recovered.

On Feb. 4 Wellington OPP officials announced they had made an arrest with the assistance of the Service de Police de la Ville de Montréal, Roussillon Intermunicipal Board of Police, Service de Police Ville de Saint-Jérôme, GardaWorld Investigations and tips from the public.

Stephane Primeau, 51, of Saint-Constant, Quebec, was charged with theft over $5,000 and possession of property obtained by crime over $5,000.