GUELPH – A suspected COVID-19 outbreak at the Wellington Terrace in Aboyne is proof the vaccine offers protection against the B117 variant now spreading in the community and is the way out of the pandemic, says the local medical officer of health.

Dr. Nicola Mercer told Wellington-Dufferin-Guelph Public Health (WDGPH) board members on April 7 that because 92% of residents at Wellington Terrace have had both doses of the vaccine, no residents have become ill or tested positive.

And the five staff who tested positive “had very weak positive levels” and are asymptomatic she said.

This is why it’s been called a “suspected outbreak” at Wellington Terrace.

“They all have been vaccinated. I’m sure that’s why they are doing so well,” she said of the staff cases.

“The message from this is that vaccines work.”

Most of the discussion at the meeting was around the B117 (UK) variant and how it has been impacting the case count locally. There was also an update on the vaccination roll-out, which continues to be dogged by irregular supply.

Mercer said a month ago, case numbers indicated the region was in the orange level of the province’s COVID-19 framework and even slipped into yellow for a few days.

But over the Easter long weekend, case numbers jumped sharply and the test positivity rate rose to 4.4%.

Younger people are becoming ill and requiring hospitalization, which is also a change from the first and second waves, which tended to have a greater impact on the elderly.

The average age of those afflicted in the second wave was 70. Now it’s 64, Mercer said, and people in their 30s, 40s and 50s are being hospitalized.

Given that, and the fact 33 classrooms in WDGPH schools were closed due to positive cases, Mercer met with directors of the five local school boards on Monday evening.

They told her they were having trouble staffing classes because so many teachers and student cohorts were ill or in isolation.

Together they decided to close schools effective Wednesday (April 7) and Mercer issued a Section 22 order.

“The directors of education knew it was coming,” she said. “We gave as much notice as possible.”

Mercer said there are 500 people on ventilators in the province, which is gravely close to the 700-patient capacity.

The B117 variant is highly contagious, and symptoms and outcomes are far worse than the original strain, which is why the abrupt rise in cases is so concerning.

Mercer said the National Advisory Committee on Immunization has new studies that indicate a single dose of the vaccine is highly effective and continues to support a four-month interval between first and second doses of the vaccine.

So public health will focus on getting first doses into arms and second doses four months later.

“We are still eight weeks away from approaching any form of coverage that would allow the pandemic to level off,” she said.

Rita Isley, director of community health and chief nursing officer for WDGPH, outlined progress with the vaccine rollout since the first shipment of the Pfizer vaccine on Jan. 6.

There are now five vaccination hubs – at the West End Recreation Centre in Guelph, the Centre Wellington Community Sportsplex in Fergus, the Alder Arena in Orangeville, the University of Guelph and at Skyjack in Guelph.

Pop-up sites have travelled through smaller communities and will do so again. Specialized clinics allow people who are mobile but who have severe disabilities to get their shots and paramedics are administering the vaccine to people who are homebound. 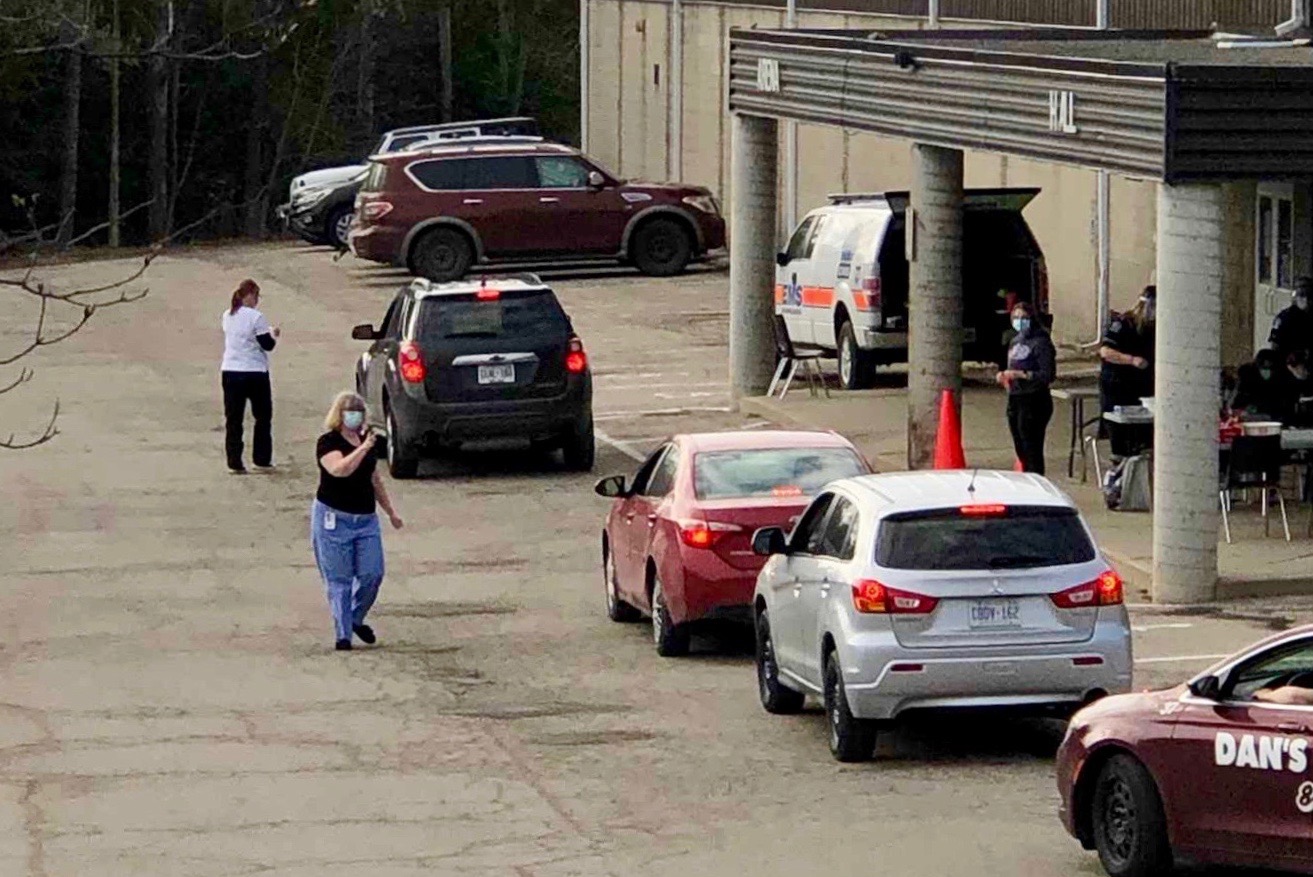 A pop-up drive through COVID-19 vaccination clinic took place at the Elora Community Centre over several days this week. Photo by Kelly Waterhouse

Ten pharmacies in the WDGPH region now administer the AstraZeneca vaccine and that number is expected to grow, Isley said. The vaccine will soon be administered in hospitals and doctors’ offices as well.

Through these various methods, “We have the capacity to deliver 10,000 doses a week,” she said.

She noted WDGPH is expecting 7,020 doses a week of the Pfizer vaccine in April and 5,000 doses of Moderna every two weeks.

The AstraZenica vaccine, while expected, doesn’t have a regular delivery schedule yet, although 3,200 doses are expected this week.

“With all the shipping issues, we are waiting until it’s in the freezer to schedule appointments,” Isley said.

Kyle Wilson, director of information systems and chief privacy officer, said the online pre-registration system is working well and with the new digital phone system, wait times have been reduced to five or 10 minutes for callers with questions.

He said the system generates appointments based on supply of the vaccine, and those invited to make an appointment are selected according to the provincial prioritization system.

So the more people pre-registered the better, he said.

“We’re trying to stay ahead of the game – at least four weeks ahead,” he said.

“So when bookings can occur, we have names to build the clinic.”

To date, 85% of health care workers have been vaccinated, 93% of essential caregivers, 73% of Indigenous adults, 91% of adults 80 and older who live in their own dwellings, and 87% of adults who receive chronic home care.