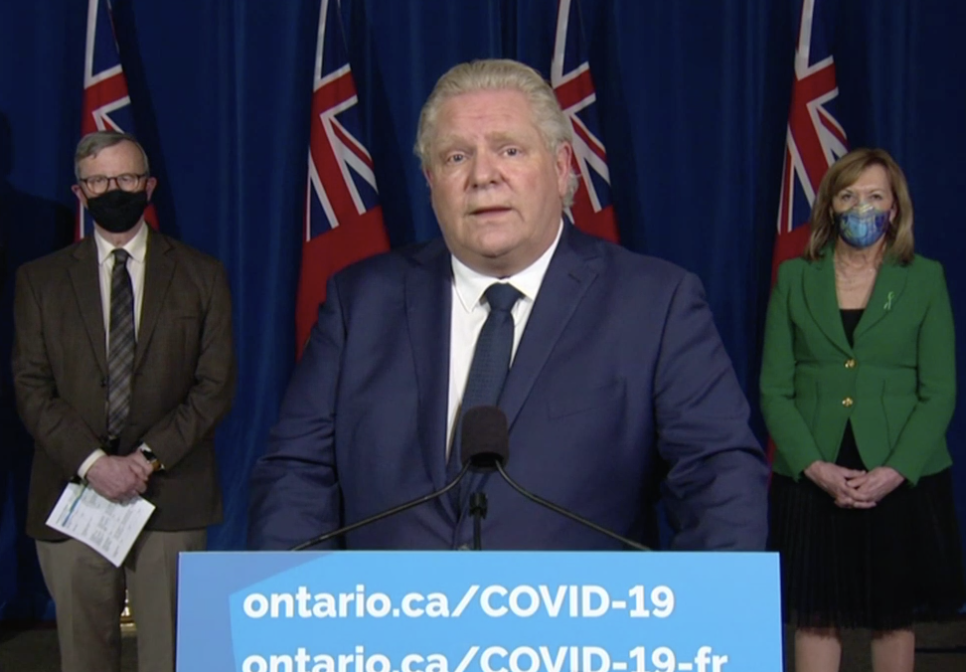 WELLINGTON COUNTY – As expected, Doug Ford has announced Ontario will enter an “emergency brake shutdown” for the next month.

The premier announced the province-wide shutdown on April 1 in response to rising COVID-19 cases and the spread of several variants, as well as the corresponding strain placed on Ontario’s health care system.

The shutdown comes into effect on April 3 and the earliest it could be lifted is May 2.

“As I’ve said many times, we will do whatever it takes to protect Ontarians,” Ford said at the April 1 press conference in Toronto.

The province reported 2,557 new cases of the disease on Thursday, the highest daily count since late January at the height of the second wave of the pandemic.

There were also 23 COVID-related deaths reported on April 1, the highest daily total since Feb. 25.

And as of March 31, there were a record-high 421 COVID-19 patients in intensive care units (ICUs) across the province.

“The cost of inaction is simply too high,” Ford stated in his announcement.

“We know for a fact … the restrictions we have introduced thus far have saved thousands of lives.”

Officials say schools will remain open for in-person learning during the shutdown, “with strict safety measures in place.”

Students will attend school next week and the planned break from April 12 to 16 – delayed from the usual time in March – will go ahead as planned, Ford stated.

Health officials stressed earlier in the day that further disruptions to in-person learning should be minimized.

Restrictions under the “emergency brake shutdown” resemble those included in the grey (lockdown) level of the province’s COVID-19 framework.

Ontarians are allowed to gather indoors only with members of their own household and outdoor gatherings are limited to five people.

Ford said shutting down for the next four weeks is “our best chance to save lives” and to ensure a “good summer” with things reopening.

He also promised to provide support for businesses to “get them back on their feet.”

The latest pandemic modelling presented by the COVID-19 Science Advisory Table shows COVID-19 variants of concern account for two-thirds (about 67%) of all new infections in the province.

“This is a new pandemic. We’re now fighting a new enemy,” Ford said of the COVID-19 variants.

The modelling also shows variants are causing more serious illness in younger people, notably those in their 40s and 50s – something not seen previously during the pandemic. 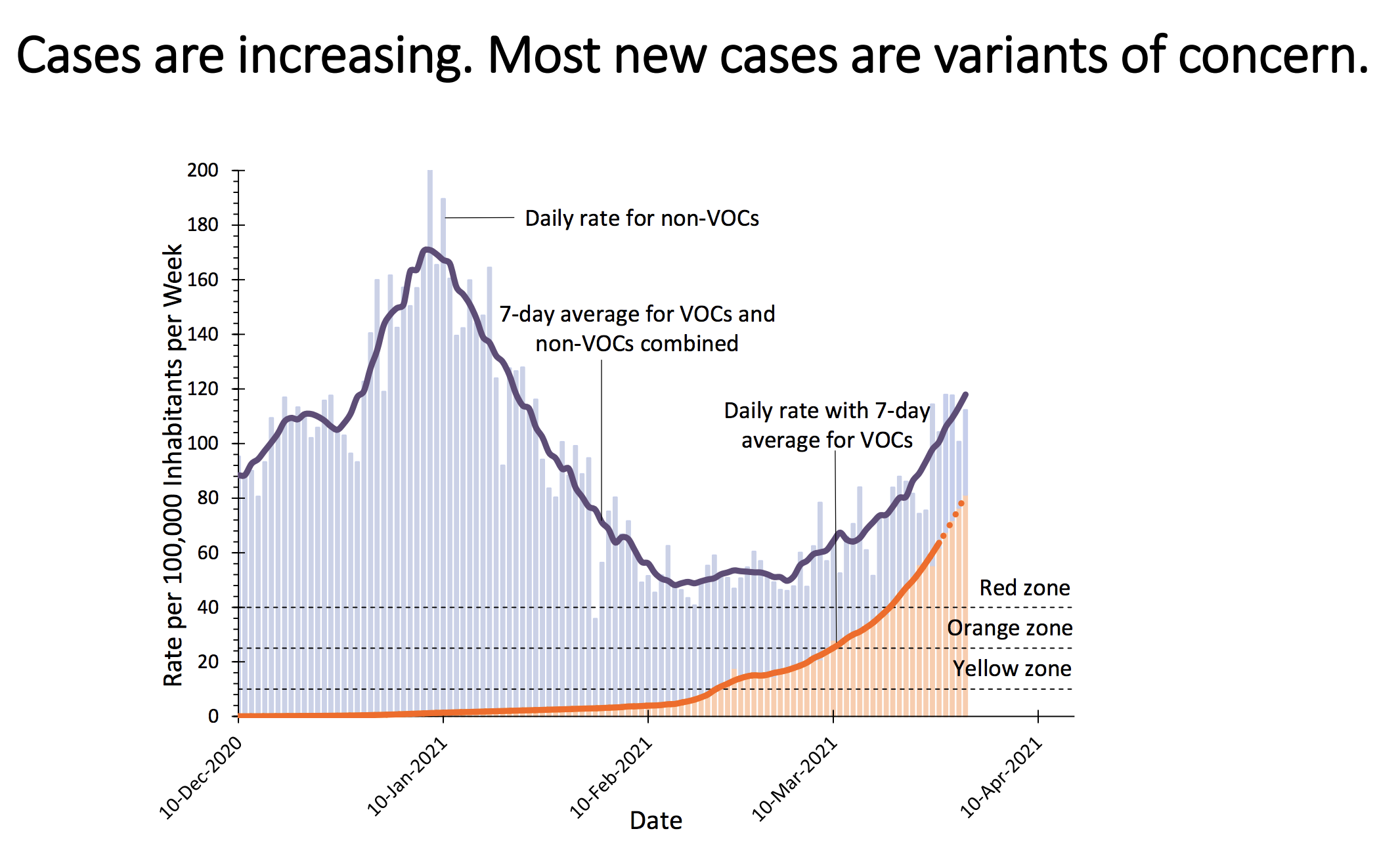 “We are in the third wave of the pandemic. As the new variants spread, you’ll see COVID is killing faster and younger,” said Dr. Adalsteinn Brown, co-chair for the Ontario COVID-19 Science Advisory Table.

“It’s spreading far more quickly than it was before and we cannot vaccinate quickly enough to break this third wave.”

The Ontario modelling also suggests, “Vaccination is not reaching the highest risk communities, delaying its impact as an effective strategy.”

Brown and Dr. David Williams, Ontario’s chief medical officer of health, also warned that Ontario’s ICU admissions will likely top 800 this month, even if a four-week stay-at-home order was issued.

Health officials have previously stated that if ICU admissions surpass 500, it would have a devastating impact on the province’s health care system.

With more than 800 admissions – almost double what was seen in the height of the second wave – it is “definitely possibility” that doctors would have to implement a triage protocol, stated Brown.

That means physicians would have to determine who is most likely to survive their illness for 12 months and allocate care accordingly, leaving those who don’t meet the criteria without care.

“Eight-hundred is a place … where clinicians have to make hard decisions you would never want them to have to make, where you will see loss of life,” Brown said. 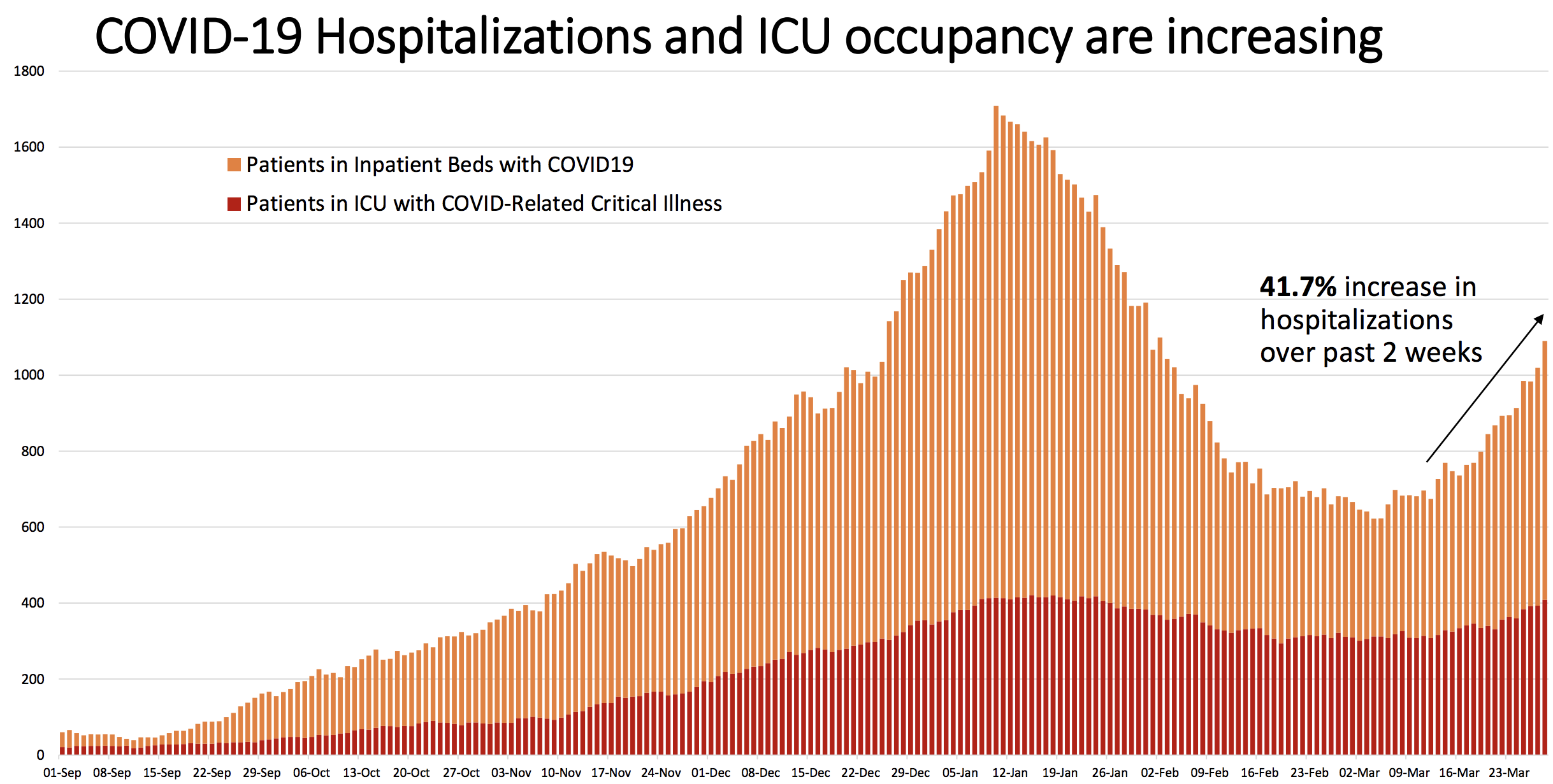 The surge in COVID-19 hospitalizations also has a ripple effect on the entire health care system. It is estimated that over 245,000 surgeries have been delayed, cancelled or postponed throughout the pandemic.

Leading up to Ford’s announcement, Brown and Williams had advocated for a stay-at-home order lasting at least two weeks, preferably four.

Modelling shows a month-long order, combined with keeping up with vaccinations, could help keep daily case counts between 1,000 and 1,500 by the end of April. A two-week stay-at-home order would mean daily infections would be about 2,000, the data suggests.

But the province ultimately decided to forego a stay-at-home order in favour of the emergency brake shutdown.

Locally, COVID-19 indicators in the Wellington-Dufferin-Guelph Public Health (WDGPH) region have been increasing for several weeks.

Since March 16, the region’s case rate per 100,000 population has increased from 23.1 to 42.0, the latter qualifying the region for the red level on the province’s COVID-19 framework.

Over the same time, the WDGPH case positivity rate has increased from 1.3% to 1.9%.

Provincial and local health officials are urging residents not to gather with anyone outside their household over the Easter long weekend.

“COVID-19 variants of concern are a real risk to our region and we must act accordingly,” WDHPG spokesperson Danny Williamson told the Advertiser.

“Because they are more transmissible and may have significant negative health impacts, we must remain vigilant.”

Williamson added, “We can all help stem the tide of cases by practicing good public health measures: gathering only with our households, wearing a face covering around and maintaining physical distancing with everyone else, and practicing good hand hygiene.”